Back on the Grid 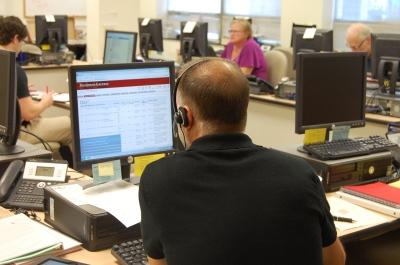 “One thing faculty members enjoy about it is that they’re helping to shape the very first contact with students once they’re actually students,” says Shalom Staub, associate provost and first-year class dean, who oversees the program.


The phonathon room on campus is full of overlapping chatter as a dozen faculty members talk into headsets, fielding questions as they scroll through course descriptions. This is the heart of the summer advising program, an effort to connect students to Dickinson in a unique way before they ever hit campus. Shalom Staub, associate provost and first-year class dean, is overseeing the program, which is an effort to reach by phone, e-mail or any other means available all of the incoming first-year students before they start registering for classes.

Before Dean of Advising Shirley King created the summer advising program six or so years ago, students would arrive at the end of August only registered for their first-year seminar, and then they would meet with their first-year academic advisors to get the rest of their class lineup in place. But imagine a handful of professors sitting down with 608 students—this year's total—right before registration begins to counsel them on all of the class-selection possibilities. "It was a huge challenge for the faculty to meet with each student individually in a single day," Staub says, shaking his head at the memory.

Summer advising now takes students through this first-semester guidance and prepares them for the course-request period, allowing them to enjoy Orientation and get a good grasp on the classes they both need and want to take before registrations begins. (Another component recently implemented toward achieving fit between first-years and their seminars is an algorithm created by Associate Professor of Mathematics Dick Forrester and his former student Thanh To.)

This is Staub's second year overseeing summer advising, a hell-or-high-water exercise in tracking down students who are often, as Staub puts it, "off the grid"—unreachable by chance or by choice. "They're hiking someplace or literally in the middle of Africa, and even their parents can't reach them. Others are reachable but just … aren't," he concludes with a laugh. So tracking them down falls to Staub (equal parts detective and academic advisor), and then he and a team of faculty members and Student Director of Orientation Travis Brown '13 occupy the phonathon room for two weeks.

Brown was brought on board this year to serve as the program's operator, fielding calls and transferring students to the summer advisors, but Staub found that the process could be well served if Brown also logged on to the class of 2016 Facebook page to manage the requests, queries and misinformation.

"Last year I noticed that upperclass students were posting all kind of messages about course selection that didn't always contain the best advice," Staub says. "This was tough enough, but then incoming first-year students were even giving each other advice. So I had to jump in to moderate." While this proved mostly effective, Brown was able this year to engage his fellow students on a different level, speaking as an equal instead of as an administrator.

This year the summer advising team reached the ultimate goal: Every student was contacted. "We've never before hit 100 percent," Staub says, "so I'm really proud of that." All but four of those 608 incoming first-years registered for classes during or hours after the advising period ended, so the percentage of students showing up not registered for classes is less than 1 percent.

And there is, of course, room for adjusting schedules after the first round of calls comes to an end, when the team takes to the phones again on August 8, during the course-adjustment period. At this point, students are shown how they can make various class schedules work, using the whole first year instead of just the first semester. "This eases students' and parents' anxiety," Staub says. "We help students see that any course they take will help them toward their graduation requirements, and they can get creative."

And when students get creative, they get excited about showing up on campus, taking the classes that will shape the directions of their lives.

"The net result of all of this is that when students come onto campus, they're not panicking about classes, and they know what they want to do," Staub explains. "When a student gets excited about a subject area and balances delving deeply into that subject area with broadly being exposed to the range of subjects a liberal-arts education offers, he or she can emerge from Dickinson really thoughtful and well-rounded and able to do some serious and critical thinking."

"The Facebook page was very active early on, when only a few students had spoken with an advisor," Brown says. "It calmed down quite a bit in regards to advising questions as more students had been contacted." With the process in hand, Brown found himself right where Staub had been the previous year in addressing varying forms of advice:  "In some cases, the process had changed, and so what upperclassmen believed was good, reliable advice was actually misinformation."