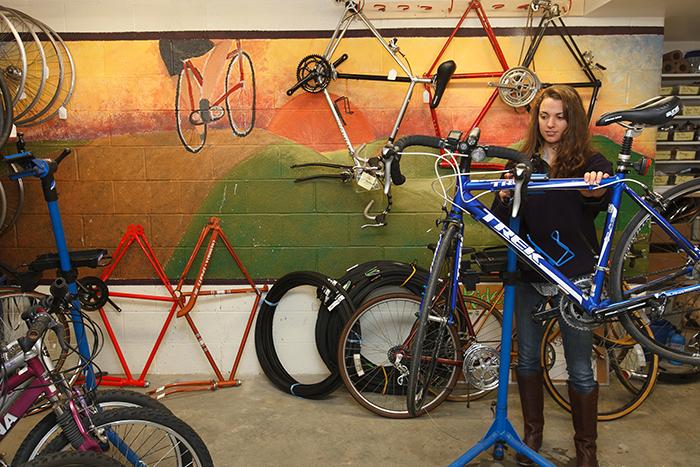 The League of American Bicyclists has honored Dickinson with a gold Bicycle Friendly University (BFU) award in recognition of the college’s achievements in promoting and enabling safe, accessible bicycling on campus.

Dickinson is among a select class of 45 new and renewing Bicycle Friendly Universities nationwide. The college moved into the gold category for the first time, having received a silver designation in 2014.

“It’s a tremendous honor to be recognized for all the hard work we are doing to make bicycling more accessible for the Dickinson community,” said Cody Rosenbarker, sustainability learning coordinator at Dickinson’s Center for Sustainability Education, and chair for the college’s Bicycle Advisory Committee. “Moving up to the gold level reflects how the college’s commitment to bicycling has grown over the last four years.”

The league created the BFU designation, which includes 193 colleges and universities, to encourage and enable people of all ages to adopt bicycling as a healthy, sustainable habit that can benefit them throughout their lives. Dickinson will continue to have access to a variety of free tools and technical assistance from the league to become even more bicycle friendly.

In addition to new covered bike racks and indoor bike storage inside the new High Street Residence Hall, Dickinson bicycling amenities include The Handlebar, an on-campus teaching bike repair co-op, and incentives like the Green Bikes Program, which loans bikes built by Handlebar volunteers to students, faculty and staff for semester-long use.

For 138 years, the League of American Bicyclists has been leading the movement to create a bicycle friendly America for everyone. Its commitment is to listen and learn, define standards and share best practices to engage diverse communities and build a powerful, unified voice for change.