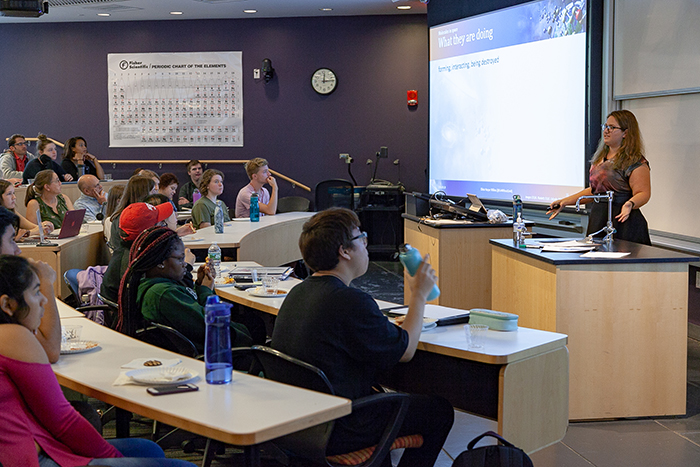 Alumna returns to campus to discuss current research, connect with students and faculty

Olivia Harper Wilkins ’15 is many things: a scientist, researcher, artist, wife and mother and Fulbright recipient, just to name a few. After studying chemistry and mathematics at Dickinson, Wilkins moved to Köln, Germany, where she worked as a Fulbright research fellow with the Cologne Laboratory Astrophysics Group at the Universität zu Köln. Currently, she is studying astrochemistry as a National Science Foundation (NSF) Graduate Research Fellow at the California Institute of Technology (Caltech), where she studies complex organic molecules (COMs) in the interstellar medium (ISM).

“I’m a chemist who never touches her chemicals,” she told a room full of Dickinson students and faculty during a recent Rush Hour talk. “My chemistry laboratory is not on Earth.” Wilkins studies the Orion Nebula, one of the brightest nebulae in the Milky Way. Specifically, she studies the plentiful molecules found within the Orion Nebula to observe how the nebula came to be, the chemistry behind its formation and how it might transform over the next couple of million years.

As a child, she thought the space between stars was just empty space, and it intrigued her to learn more about what actually fills that space—chemistry. During her studies of astrochemistry, she was enthralled by the stages of the stellar evolution cycle and how molecules can interact at such extreme interstellar conditions. For example, molecules react and change at temperatures of 5 degrees Kelvin (-450 F), 60 degrees Kelvin (-350 F), compared to the average 300 degrees Kelvin (80 F) we experience here on Earth.

Because her laboratory is nearly 1,400 lightyears away, she uses astrophysics to help her understand just where things are located in the physical structure of the nebula. As an astrochemist, she observes the temperatures of molecules to understand where these molecules may have formed and what circumstances led to their formation.

During her Fulbright, she studied astrophysics in a laboratory setting. By simulating the extreme interstellar conditions—called near vacuum—under which these molecules would react, researchers were able to replicate what is happening in space. She likens her studies to being a forensic scientist. "The telescope is like your magnifying glass," she said. "You see a fingerprint at the crime scene, which is space, and you cross-reference that fingerprint with a database to try to pinpoint what molecules we’re observing.”

Currently, her research seeks to test a hypothesis that’s been unconfirmed for years, that methanol—a simple solvent in any organic chemistry lab but a complex molecule by interstellar standards—forms primarily on the surfaces of icy interstellar dust grains. Experimental and theoretical work support this idea, but evidence obtained via astronomical observations is the final piece required for proof. While many scientists have tried to answer this question before, their findings were inconclusive. But Wilkins hopes that a better telescope with higher resolution will help her answer the questions those before her have left unanswered.

As she continues to pursue her Ph.D. at Caltech, she will calculate the ratios of different isotopologues, mapping them and trying to understand how these ratios change. Her goal is to confirm the hypothesis that methanol forms predominantly on icy surfaces. “I then want to look at other oxygen-bearing complex organics, such as methyl formate and try to understand their formation as well because even less is known about that,” she said during her recent talk.

To do that, Wilkins is preparing to work with telescopes in West Virginia and Germany. In addition to her research and science communication efforts through public speaking, Wilkins is active on social media and shares science through illustrations of results from scientific literature or conference proceedings. She also enjoys satisfying her love for radio telescopes and travelling near and far with her family to see them. 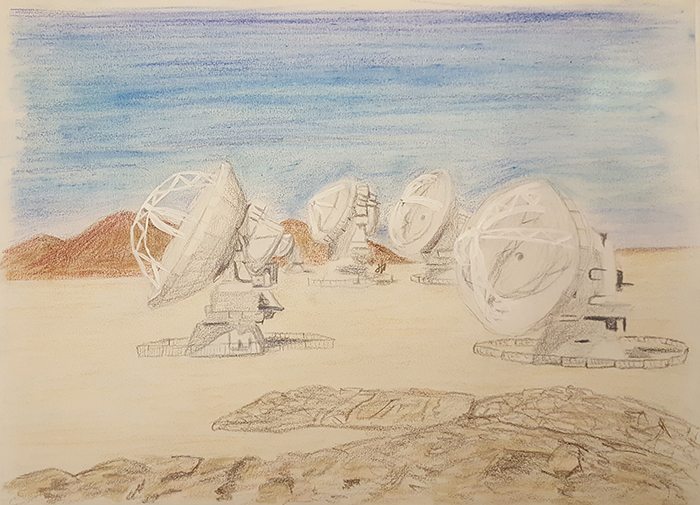 Wilkins' sketch of the Atacama Large Millimeter/submillimeter Array (ALMA) in Chile, one of the telescopes she uses to study methanol in the Orion constellation.