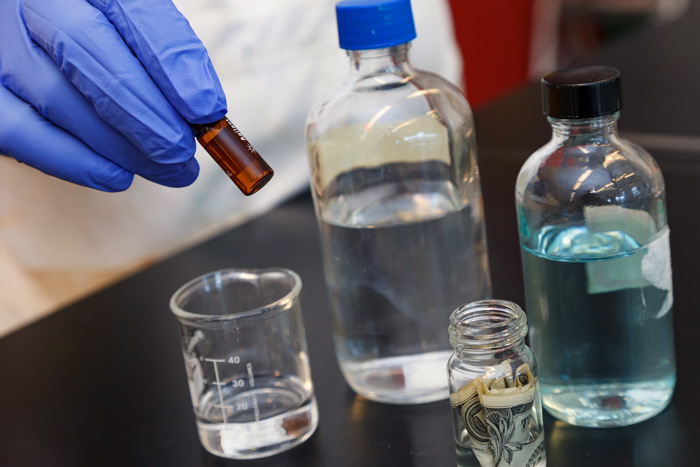 Putting dirty money to good use

Here's a startling fact: Roughly 90 percent of the dollar bills in circulation in the U.S. have been shown to contain cocaine residue.

Once you get past the shock—if you're a chemistry professor, at least—knowing there are trace amounts of drugs on currency is a great leaping-off point for some scientific exploration. So to help students in her Modern Chemical Analysis course master complex measurement techniques, Professor of Chemistry Amy Witter turns to some dirty money.

“The focus of the course is on learning about and using techniques that allow us to accurately and precisely measure chemicals of interest from any matrix,” she explains, noting that besides dollar bills, students also tested euros and renminbis (RMB). “In the case of this lab, the matrix is money, and it came out of a curious finding that most U.S. money has traces of drug residue on it.”

“In this experiment, I was responsible for extracting drug residues of cocaine, methamphetamine and oxycodone from a $1 U.S. bill,” says Lizzie Trost ’21 (chemistry). “Professor Witter then analyzed the composition of my solution with liquid chromatography-mass spectrometry (LC-MS), and I was responsible for using a set of standards to calculate the mass of trace drugs on my bill.”

It’s long been known that dollar bills contain traces of illicit drug (bills cross-contaminating one another in currency-counting machines at banks is a prime culprit). But testing the hypothesis that U.S. money would have the greatest concentration of drug residue compared to money from other countries was a new twist.

And the hypothesis was dead on: No drug residue was quantifiable on the euros or RMBs. Meanwhile, cocaine was present in the highest amount (70 percent) of the sampled bills, compared to the methamphetamine (60 percent) and oxycodone (20 percent).

“This lab gave me a chance to see a forensics application for analytical chemistry, better understand how the LC-MS instrument operates and apply the skills I learned in class to a hands-on scenario,” says Trost, who also says that while research was part of the reason she came to Dickinson, she’s still surprised by what’s offered. “I didn’t realize how extensive research opportunities actually are here! I had hoped to do research as a junior or senior, but I never imaged I would fortunate enough to be approached as a freshman.”