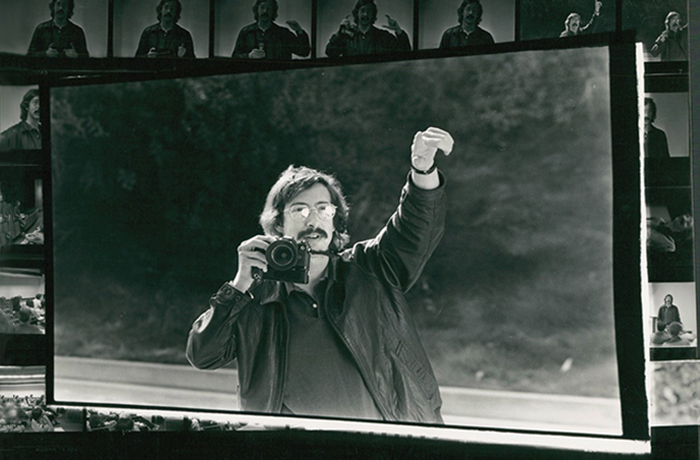 Rick Smolan ’72 invites us to join the ‘good fight’

Like many Americans, Rick Smolan ’72 didn’t follow political news closely before the 2016 U.S. presidential election. But as the election progressed, he became concerned about the tensions that had bubbled to the surface of American life and the divisions he saw between folks on opposite sides of a widened political divide.

“I think a lot of us felt there were inequities and social problems that, while not solved entirely, were moving in the right direction,” says Smolan, a renowned photojournalist (Time, Life, National Geographic), bestselling author and media-production CEO, “but after the election, I started to realize how recent the progress we’d made has been—and how fragile it is.”

He responded with a multimedia-enhanced photography book that takes the long view of this cultural moment and turns it on his head. Smolan will visit Dickinson Friday, April 27, to discuss his latest project, coauthored with Jennifer Erwitt, and the message it presents. 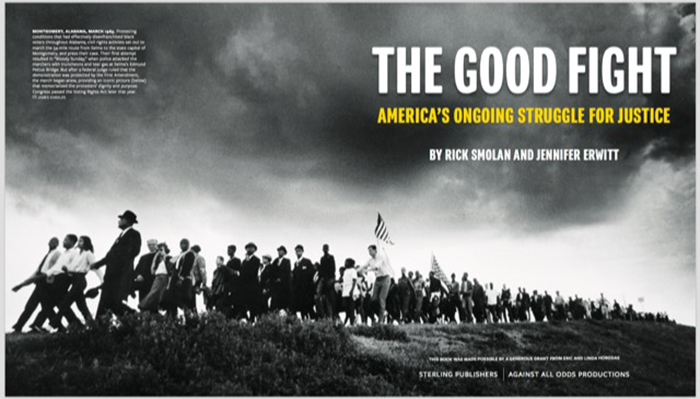 Made possible by a grant from the Anti-Defamation League (ADL) and designated an Amazon top-100 bestselling book within weeks of its release, The Good Fight: America’s Ongoing Struggle for Justice is the latest offering from Smolan’s Against All Odds Productions, a cross-media company best known for its “Day in the Life” photo-book series, which includes the bestselling America 24/7 and INSIDE TRACKS.

“It’s easy to get caught up in the daily news cycle,” he explains, “but when you go to 30,000 feet and look at American history through all of these different lenses, you begin to realize how much positive change has happened in a short period of time and how many heroes are out there fighting the good fight today. Those are the stories we wanted to tell.” In his newest book, Smolan and Erwitt tell the story of America’s complex social-justice history during the past 100 years, painting a vivid portrait of just how far we’ve come over recent decades and placing current struggles into that context. 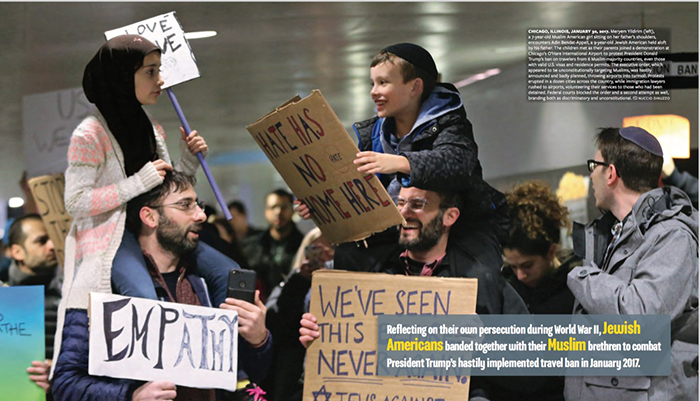 Which children in the lifeboat?

Beginning in early 2017, Smolan and the Against All Odds team combed through hundreds and thousands of published and unpublished photographs by some of the world’s most celebrated photojournalists, painstakingly whittling down their top picks to a collection of more than 180 images that would best tell the stories of different facets of American social-justice history at different points of time. “It’s a little like: Which of your children make it to the lifeboat?” Smolan says with a laugh.

Then Smolan and his team hung thumbnails of the finalist photos on a wall, and reconfigured the layouts more than 30 times, until it felt right. 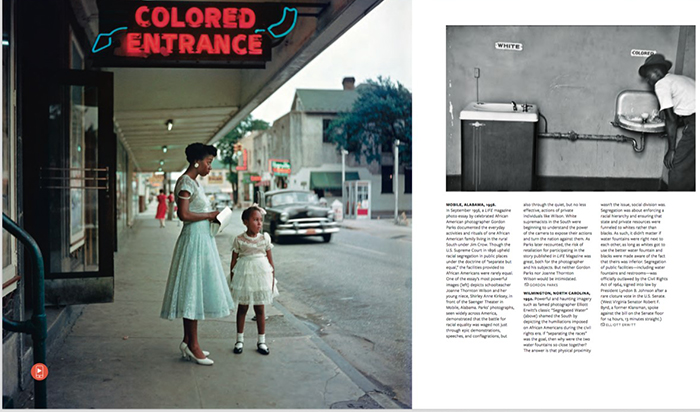 The final selections include a midcentury person of color at a “whites only” water fountain—a reminder of progress made since—and a photo of a protest in response to the death of Freddie Gray—chronicling the continuing fight. Backpacks left behind by migrants echo another “good fight” in progress, while images of folks on the move—during the historic march from Selma to Montgomery and during the 2016 Women’s March on Washington—draw parallels between different struggles a half-century apart. 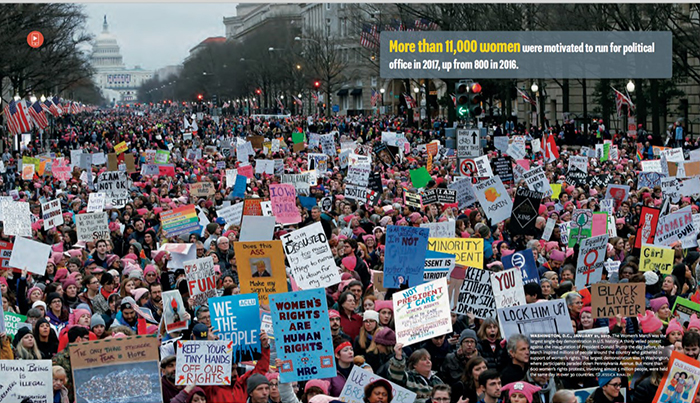 One of the book’s most powerful and intimate images—a grandmother in a Ku Klux Klan hood kissing her small granddaughter—contrasts strikingly with a more famous adult-and-child photograph. It shows a small black boy in the Oval Office with the first U.S. president of color. 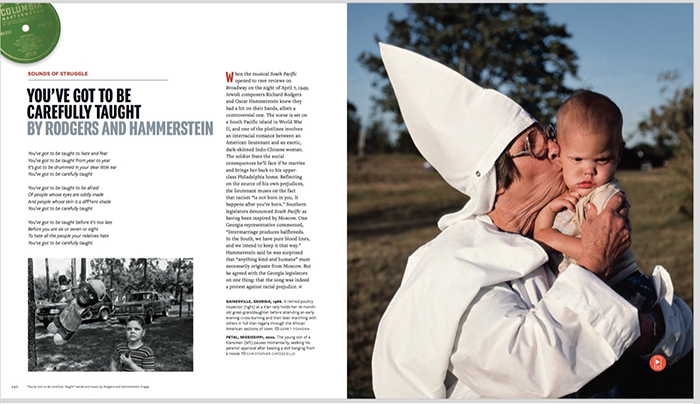 Storytelling with a twist

While the photos capture the starring role, the book also includes contextual text by Smolan and Erwitt and essays by social-justice and media leaders who’ve helped shape national conversations around social issues. 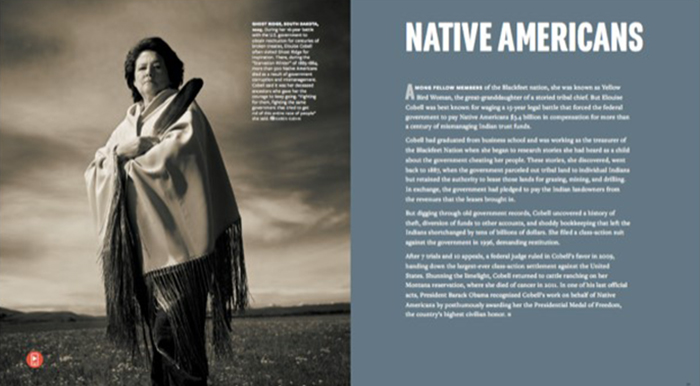 Megan Smith, who shattered glass ceilings as the White House’s third chief technology officer, is featured as a powerful role model in the chapter about the women’s movement. Star Trek’s George Takei, a Japanese-American, recalls his family’s time in a WWII internment camp. Apple CEO Tim Cook, the first openly gay CEO in the Fortune 500, recounts LGBTQ+ history. Norman Lear, showrunner for the groundbreaking “All in the Family,” provides thoughts on the Jewish-American experience, while 21st-century media powerhouse Shonda Rhimes speaks to an African American perspective. 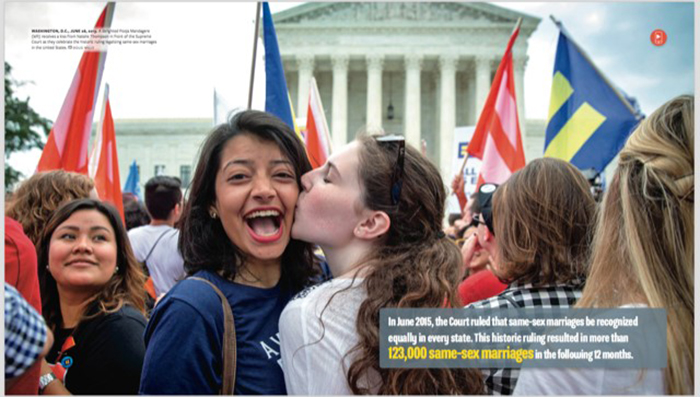 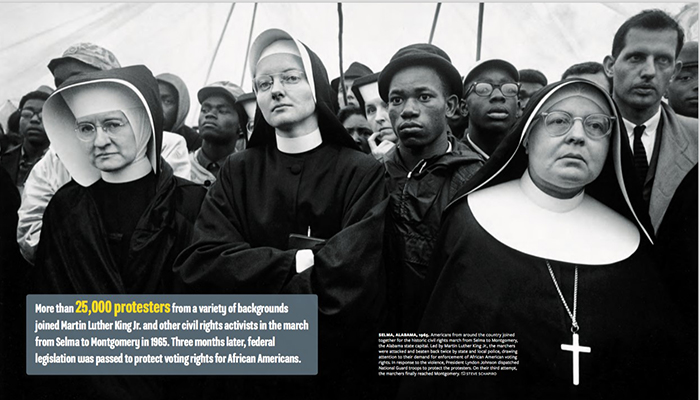 And that narrative is resonating. The book has garnered numerous awards since its publication last year, including the IPPY Independent Publisher Gold Book Award, two Nautilus gold awards, and one Nautilis silver and two Ben Franklin Independent BookSeller Association silver awards. It also was dubbed one of the “10 best gift books of the year” by People magazine, was praised in The New York Times and was recently designated as an official TED Book Club Selection.

Smolan, who developed his own photography major at Dickinson and tapped his Microcosm yearbook experiences layouts to secure a photojournalism position at Time magazine right after graduation, will return to his alma mater Friday, April 27, to share photographs and videos in the book.

His public talk, held in Althouse 106, will include reflections about what has changed in America in recent years, what remains unchanged and the ways in which photography can powerfully communicate these sweeping and often complex human phenomena. A book sale and signing will follow.

“I can’t wait to come back,” he says. “I think people in the students’ age group are helped by being reminded of this American history, because they’re the ones who are called to make positive change.”