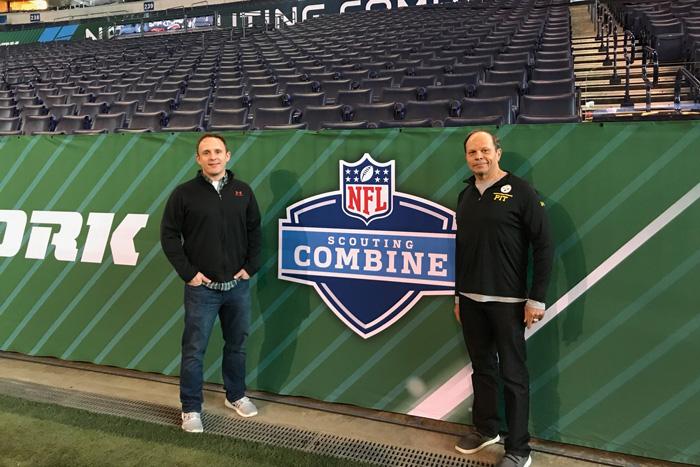 Steve Menzel '01 (left), a producer with NFL Films and the NFL Network, and Mark Gorscak '79 hit the field in Indianapolis for the 2018 NFL Scouting Combine.

Ask any football fan what’s the best event at the NFL Scouting Combine, and you’ll get the same answer 99 percent of the time: the 40-yard dash. The combine is an annual event where college football players show off their skills to NFL scouts before the NFL draft, and the speed these players generate over that short distance makes the 40 a true spectacle. (Seriously, check out the five fastest players the 40 has seen over the past decade in the video below.)

And if you’ve ever watched the event, you’ve probably seen Mark Gorscak ’79, a longtime Pittsburgh Steelers scout and the starter for the 40 for the past 15 years. A combine fixture, Gorscak will tell you that while speed counts, it’s not the only thing that sets the pros apart from the players who don’t make it.

“You want guys who love football,” he says. “Guys that would be devastated if it’s taken away from them. And guys who are smart and have a heart.”

Gorscak has been around football a long time, even serving as a coach at Dickinson in the 1980s. And the Red Devils are still top of mind. A member of the Puggah group, he and several other alumni endowed the football locker room and compete in an annual golf tournament in memory of Gary “Pugs” Knechtel ’80 that benefits Dickinson athletics.

But Gorscak didn’t become an NFL scout through love of football alone.

“Dickinson prepared me because it taught me how to communicate with people, verbally and in writing, and it does that in all disciplines and all majors,” says the former psychology major. “It’s just the preparation of the liberal arts.”