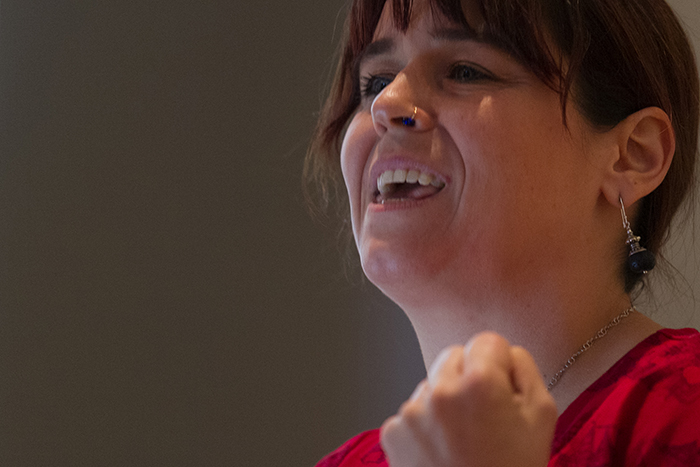 Melissa Lareau '03 is founder and owner of Dirt Revolution, a soil testing and rehabilitation organization that seeks to help individuals and families achieve healthier, food-secure lives. Photo by Carl Socolow '77.

During Senior Week, her mother attempted suicide. After she moved to New Orleans, Hurricane Katrina swept in. Months later, she had another brush with danger, this time overseas.

Melissa Lareau ’03 (English, history) reflected on these formidable challenges, and the unconventional career path she created around them, during a recent visit to campus. As Dickinson's 2018 Cogan fellow, an honor bestowed on an inspirational former Dickinson English major, the founder/owner of a sustainability- and food-focused organization delivered a public lecture and met with students majoring in English, sharing life experiences and career advice.

As an undergrad, Lareau was involved with Kappa Alpha Theta, Belles Lettres, women’s track, Omicron Delta Kappa and Run With It, and she studied abroad at the University of East Anglia (UEA) during her junior year. For her English senior project, she researched changes in romantic landscape ideology caused by the Industrial Revolution, a topic she further explored through a graduate program in landscape history at UEA. Lareau faced her first personal struggle just three days before Commencement, when she received word that her mother, who’d been battling mental illness, had attempted suicide.

After Commencement, Lareau flew home to be with her mother. After earning her master’s degree from UEA, she moved to New Orleans to again spend time with family as she plotted her next steps.

Lareau applied to the Peace Corps—typically, a yearlong process—and took a job at a local Whole Foods, which presented a chance to learn about sustainable food and food-distribution systems. By the time she received word that she’d been accepted into the Peace Corps program, she'd discovered a new mission—securing healthy food options for New Orleans residents in need. She decided to remain in New Orleans, but Mother Nature had other plans.

Hurricane Katrina touched down in August 2005, displacing more than 400,000 citizens and devastating areas of New Orleans and the Mississippi Gulf Coast. After evacuating and securing a place to stay out of state, Lareau was out of harm’s way but suffering from trauma. She opted to trek along the Camino de Santiago, a network of European trails that pilgrims have traveled for thousands of years in search of spiritual enlightenment or personal growth.

Lareau set out to walk the Camino alone, and in winter, and after an overnight scare in freezing temperatures, she switched course and took on a safer healing stay in Madrid. She returned to New Orleans rejuvenated, and with renewed commitment to make a difference in the Hurricane-ravaged city. Lareau volunteered with a human-rights organization, became a Reiki master and co-founded a nonprofit that offered classes and workshops developed to help fellow New Orleans residents heal from PTSD.

Lareau also built on what she'd learned about agriculture and food systems by founding a community-owned food-justice organization. Open to the public, the New Orleans Food Coop continues to increase local residents’ access to fresh, wholesome, affordable and minimally processed and minimally packaged foods, many locally, organically and sustainably produced.

Professionally, Lareau knew she’d found her niche, and she wanted to shore up the skills and experience to take her work to the next level. Personally, she wanted to explore a new city, and she faced another heartache when her mother passed away.

Lareau moved to San Francisco, where she worked for two successful startups and added new perspectives to food and agricultural issues she’d studied as a landscape historian, working first as a gardener, then trainer, then account manager of a landscaping company—a difficult line of work during California's five-year drought. Last November, she put all of her professional, academic and community-organizing experience to work when she founded Dirt Revolution, a company that works to identify toxicity in soil, improve soil health and provide services, tools and information that people need to grow and access toxin-free fresh food.

It's been a circuitous journey, Lareau admits, but with common interests and goals threaded through it, beginning with her senior-year thesis. She says she's grateful for the challenges that drove her forward and for the skill sets that allowed her to realize her evolving goals as they unfolded.

Leah Miller ’18 (English and women’s, gender & sexuality studies) says she finds inspiration in Lareau's story, as she prepares for her own graduation day. “Her career path illustrates the many opportunities available to English majors at Dickinson,” says Miller, the student coordinator for the Cogan event. “And her resilience and positivity reminded me that I am equipped with the tools to handle the difficult, unexpected elements of life that will be thrown my way.”