Inside the Joke Factory 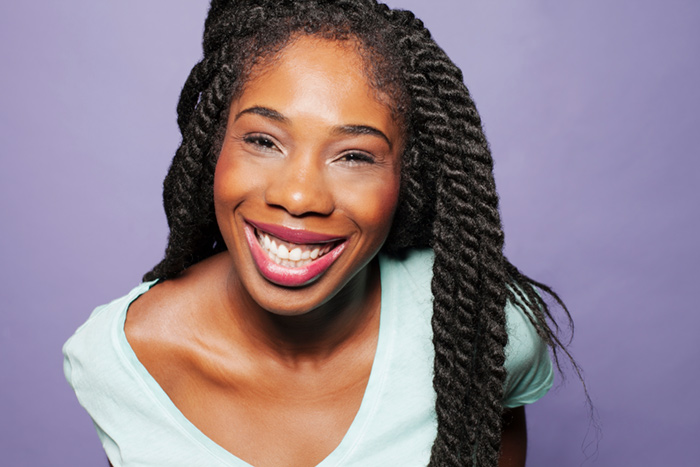 It’s hard to believe, but Lauren Smith ’06 didn’t always recognize her superpower. A high-achieving student who was comfortable onstage, she was nevertheless unnerved when a teammate on her high school’s speech and debate team called in sick and her coach/dad asked her to deliver a comic monologue.

“I said, ‘I can’t—I’m not particularly funny,’ ” Smith remembers. But she learned satiric selections from The Colored Museum by George C. Wolfe—and seized first place.

Fast-forward 15 years, and Smith’s a comedy writer and improv comedian with a following at New York’s iconic Magnet Theater. She recently reflected on the Dickinson club, course and connections that helped her pitch a tent in a notoriously competitive field.

A St. Louis native, Smith skipped seventh and eighth grades and graduated high school at age 16. After visiting campus with her mom and learning about the college’s global programs, she enrolled at Dickinson with her sights set on a law career.

Although she’d attended a white-majority school, Smith soon discovered that adjusting to campus life wasn’t easy at a time when only seven percent of enrolled Dickinsonians identified as students of color. To find her place, she got involved.

Smith joined the Multi-Organizational Board (MOB), Umoja, the African American Society and debate club, and she accepted a student worker position in the college’s diversity office and served as a resident advisor. She also got onstage, as a vocalist who took music department lessons and as a step team and Freshman Plays performer. But it was her involvement with Run With It!, the student-run improv comedy troupe, that strengthened her comedy chops.

“It was a learn-as-you-go situation,” she remembers, “and I quickly learned that jokes about our shared experiences as students played well, because people laugh at what they recognize.”

Smith also recalls three educational touchstones: an introductory course with Associate Professor of American Studies Cotten Seiler that inspired her to declare an American studies major, a study abroad experience in Cameroon and the 2003 Mexican Migration Mosaic. Through the Mosaic, she traveled to nearby Adams County, Pa., to video interview Mexican migrant farm workers, and to Peribán, Mexico, the hometown of many interviewees. She then translated and transcribed her interviews and selected clips for use in a larger work—skills that came in handy the summer after junior year, when she served an internship at the cable channel VH1.

Smith was referred for that internship by Amy Nauiokas ’94, whom she’d met during a music scholarship luncheon on campus. As a TV intern, she did a lot of transcribing, earning a reputation as a speed demon at the keyboard. She graduated from Dickinson magna cum laude the following spring, with a job lined up at VH1. Smith worked her way up from production assistant to producer, overseeing a small team, pitching segments, working in the cutting room with editors and drafting voiceover scripts for the comedy writers. Unlike most drafts, hers were very funny, requiring little if any tweaking. So when a staff writer position opened up, she was a natural choice.

Now a card-carrying professional writer, Smith wrote for VH1’s Best Week Ever and then moved to Bravo, where she worked on Watch What Happens Live With Andy Cohen and Fashion Queens. She now writes for The Rundown With Robin Thede on BET. Additional credits include other series and specials on Bravo, VH1 and Lifetime.

Smith sharpened her performance craft through workshops at the Upright Citizens Brigade, cofounded by Amy Poehler, and at Magnet Theatre, where she continues to perform regularly. She’s also appeared at the Laugh Factory, in the Lucky 13 Play Festival and Netflix’s The Characters and on VH1.com, The Scene and Refinery29. Her voiceovers include radio ads for Dunkin’ Donuts; she also hosted Zagat’s “Chefs Eating Tacos” YouTube series. 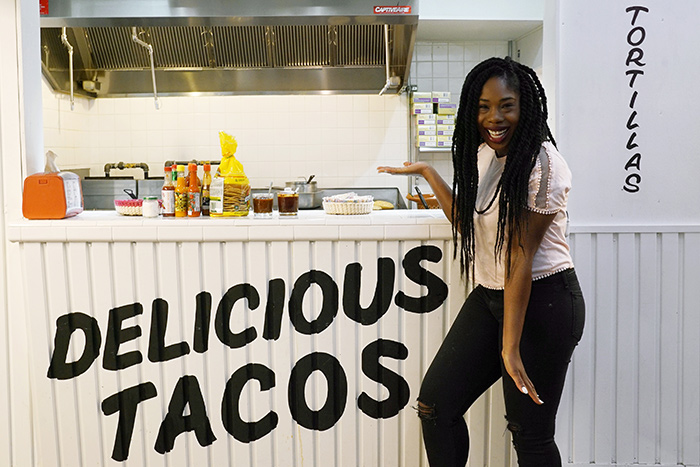 Smith says that while performing with Run With It! honed her comedic sense, the writing and video skills she obtained at Dickinson were the foundation for her TV writing career. She gives back through the Alumni Council and remains in touch with Dickinson friends, including those who attended her 2015 wedding to Brooke Helburn (officiated by her dad, the wedding was featured in The New York Times).

When she’s not making people laugh, she’s brightening lives in other ways. Smith, Helburn and “furbaby” Jelly, a registered therapy dog, volunteer in the community through the ASPCA and the A Fair Shake for Youth program. An American Sign Language student, Smith also helps out with a bimonthly interpreting program at the Museum of Modern Art, which provides guided after-hours tours for hearing-impaired adults.

Asked if she considers herself a comic who writes or a writer who does comedy, Smith says she’s paid to write. “But my real job is being a joke machine,” she points out. “Whether the jokes come out of my mouth or my fingers, that’s what I love to do.”