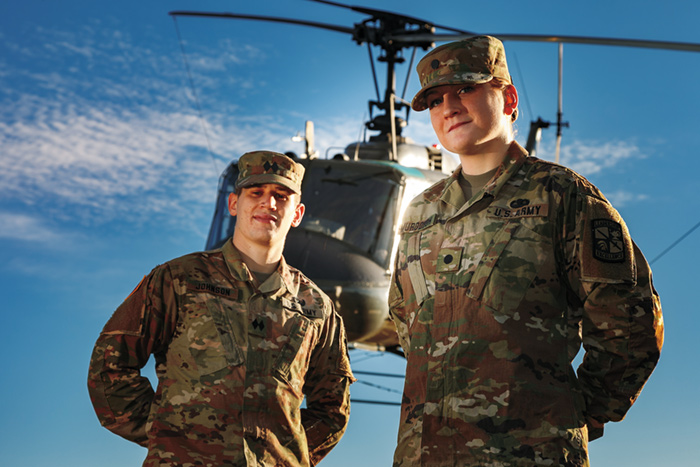 Remember the first time you jumped out of an airplane? It was probably something like this:

“We got up and walked toward the back of the C-130. The engines were roaring; it was boiling. Every fiber of my being was screaming to stop moving—this wasn’t for me, I wasn’t ready. But I had a little voice in the back of my head saying that if I didn’t take this risk I’d regret it for the rest of my life. … I said a quiet prayer and suddenly I was at the door looking at the tops of trees, and the wind sucked me out. Then a roar, a rush, and I was flying horizontally with my feet toward the plane, which was going away from me as I flew backward. And suddenly it was quiet, and I heard birds.”

That account comes courtesy of international studies and economics major Hayley Murdough ’18 (and probably just convinced you that you absolutely have to go skydiving or never will). The jump served as baptism by air when the Mechanicsburg native and ROTC Blue Mountain Battalion cadet began the Army’s Airborne School. And if going through jump school wasn’t enough, Murdough is the first female Army cadet (ever!) to attend Cadet Troop Leader Training (CTLT) at Special Warfare School, where special forces soldiers like Green Berets go through selection and training.

Does it seem weird that someone like this would be at Dickinson, a bastion of the classical liberal arts? Actually, it makes a lot of sense, because mounting frontal assaults on challenges and breaking new ground are what Dickinson is all about.

“When I compete with students from other schools, especially larger schools, I feel much more prepared to tackle complex problems,” says Murdough, who will commission as a 2nd lieutenant and begin a career in military intelligence via the Military Intelligence Basic Officer Leader Course next summer. “The curriculum at a smaller liberal-arts school like Dickinson doesn’t teach us to think ‘outside of the box’—it teaches us to totally get rid of the box, to eliminate the limitation before the box even has time to be formed.”

Murdough earned the designation Distinguished Military Graduate (DMG) this year, an honor the U.S Army Cadet Command bestows on the top 20 percent of graduating ROTC cadets. Not to be outdone, fellow ROTC cadet Ellis Johnson ’18 (physics, Russian) also earned DMG status, and on top of that he was named one of the top 10 ROTC cadets in the country (of 5,536 total), an extraordinary achievement. The honor is based on several criteria—including GPA, physical fitness, civic engagement and performance during ROTC training and advanced camp—and Johnson is the only cadet among the top 10 to study at a liberal-arts college.

“In general, these criteria speak to a cadet’s ability to communicate and function in a diverse and potentially unfamiliar community,” says the Carlisle native, also a future 2nd lieutenant and Army aviator who will attend the Basic Officer Leader Course and flight school. “These are some of the areas that both Dickinson and Army ROTC’s Blue Mountain Battalion have really helped me improve during my last four years.”

Johnson spent nearly six months abroad last year in Narva, Estonia, and Moscow, Russia, in both Army- and Dickinson-sponsored programs, and again the one-two punch proved to be powerful.

“Cultural immersion not only showed me the different lives people live across the world, but more importantly that most people are a lot more similar on the human level than it may seem,” Johnson says, noting that he hopes flight school will one day lead to NASA and a career as an astronaut. “Going abroad is something that many college students—and especially ROTC cadets—often do not get to experience, and I am immensely grateful for the opportunity Dickinson and Army ROTC’s Blue Mountain Battalion have given me.”