A star is born in the business of arts 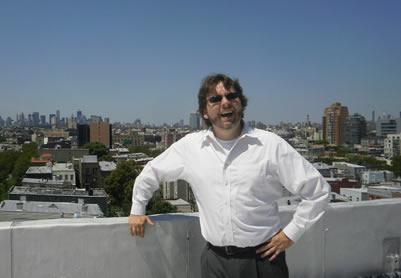 Josh Sherman ’96 is producer of a Broadway production starring former Star Trek leading man William Shatner. “It was alluring to bring him back to Broadway after a 50-year absence from the stage,” Sherman says. “He’s great to work with—he’s entertaining, and he’s got more energy than a college freshman.”

There are no dancing grannies, no bratwurst hats or Nazi playwrights in Joshua Sherman ’96’s life as a Broadway producer, no matter what the famous Mel Brooks musical might lead us to believe. But there’s still glamor and excitement galore. Sherman, president of a newly founded New York booking agency, recently produced a Broadway show that set critics abuzz, thanks to a star with unusual pop-culture cachet.
“He’s not just a national icon, or an international icon. He’s more like an intergalactic icon,” Sherman says of William Shatner, best known for his role as Star Trek’s Capt. James T. Kirk. The show, Shatner’s World: We Just Live In It, is Sherman’s first Broadway production in a steadily ascending theatrical career.
An English and dramatic-arts major, Sherman earned an M.F.A. in arts management from City University of New York-Brooklyn and gained experience as a booking agent before co-founding his agency, Innovation Touring Group, in December.
“Almost like Zen”
Asked to describe his day-to-day work life, Sherman recalls a conversation with Micah Joel ’96, who partnered with Sherman to co-produce an off-Broadway production in San Francisco and recently flew in from Australia to attend the Shatner’s World premiere with fellow alums. “Joel said, ‘For the first year, I kept asking you what a producer does. Now I know: It’s everything.’ And it’s true,” Sherman says, chuckling. “It’s almost like Zen.”
The job blends Sherman’s natural enthusiasm and people skills with extensive knowledge of theater and business principles. It also taps a sociologist’s facility with demographical trending, since a production of an edgier show such as the erotic Spring Awakening targets a very different audience base than a classic musical such as Anything Goes. This means that Sherman must not only recognize a given show’s potential for success, but also pinpoint pockets of the population who will attend it—and then reach them in the most effective way.
So when your first job as agency president is to produce a one-man play starring a television legend also known as a film actor, spoken-word musician and Priceline negotiator, you face a daunting task. Sherman soon learned that while Shatner has a broad fan base, engineers and scientists were especially enthusiastic about his work. “They love him because he was Captain Kirk, so the places where NASA congregated—Houston, Texas, Florida, anywhere there was a space program—were ideal targets for the show,” Sherman says. Shatner also appealed to Stephen Colbert’s demographic; after Shatner’s appearance on The Colbert Report, ticket sales soared.
Carving out a niche
Looking ahead, Sherman plans to build his agency’s roster, picking up more Broadway shows and hybrid attractions. A one-man show starring celebrity chef Anthony Bourdain is already booked for next year.
The key to Sherman’s success is a deep love of the work and an ability to carve out a niche in a notoriously difficult field, he says.
“You don’t have to be an actor or stage manager to work in this profession, particularly if you have knowledge of marketing, business and international studies,” he says, ticking off the names of several alumni who have carved out successful careers in regional and indie theater and higher education, at Lincoln Center, on Broadway and beyond. He’s collaborated with fellow Dickinsonians on theatrical projects and keeps in close touch with a small group of alumni, who have attended many of his productions over the years.
“There are jobs to be had, but you need to have a passion for the arts and for what you do, and you need to stay positive,” Sherman stresses. “That’s the most important thing in every profession—and in life.”