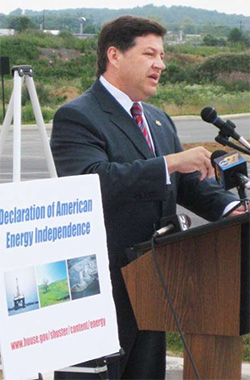 “It’s actually quite an impressive office,” he admits with a smile.

Too bad he’s rarely ever there.

For Shuster, who is running for his fifth term, serving in Congress has very little to do with sitting in the halls of power. During his average 12-hour work day in Washington, he’s lucky if he spends more than an hour in his office. So where is he the rest of that time?

“There’s a lot more compromise and horse trading going on than you realize,” Shuster says, noting that as deputy Republican whip his days in the nation’s capital are largely spent bouncing from one congressional representative to the next lining up the 218 votes needed to pass legislation. “I may go to a Republican from Arizona and find out he’s against a bill because it somehow negatively affects Arizona. Then I have to go back to the leadership … and try to tweak the bill to satisfy his needs so you can build to that magic number of 218.”

Legislation, Shuster has found during his eight years representing Pennsylvania’s 9th District, is built less on stirring debate and more on tedious negotiation. “As the old saying goes, two things you don’t want to see being made are sausage and legislation,” he says with a chuckle. “Sometimes you have to put some bad stuff in there … to get the bigger package passed. I’d be willing to guarantee that in our 230 years of history there’s never been a legislator in the halls of Congress who could say, ‘This bill is 100 percent of what I want,’ because our system is built on compromise. If you get 70 percent of what you want, that’s a great bill.”

Understanding the issues behind those bills also takes Shuster away from that Capitol Hill office. Half of his time is spent in his south-central Pennsylvania district meeting with constituents to discuss matters as varied as the war in Iraq, the soaring price of gas or a township’s sewage problems. His work on the Armed Services Committee has taken him to Iraq five times and Afghanistan twice.

“I always make it a point not to spend too much time with generals,” he says. “You need to talk to the sergeants, the captains and the guys and gals on the ground doing the work day to day to really get an on-the-ground perspective.”

Seeking that perspective has meant being rushed out of Baghdad by helicopter after the first Green Zone suicide bombing in 2004, but it also has won Shuster some vital firsthand knowledge on the war. In addition to hearing troops describe the positive reconstruction efforts he feels are often ignored by the national media, Shuster has been able to spot small changes that speak volumes to him about the country’s progress.

“In 2003, the first time I went, I noticed there were literally no satellite dishes on any rooftops; Saddam had outlawed them,” he explains. “A year or two later, about 30 or 40 percent had them. When I was there in November, every structure I saw had a satellite dish. So in a matter of about three to five years, everybody now has access to the world media, and I think that’s extremely important when you’re trying to bring a country out of tyranny and into democracy.”

Discoveries like this are why Shuster describes his job as “a constant state of education and re-education.” And luckily his time at Dickinson prepared him well for just such a job.

“Dickinson’s liberal-arts education, which really teaches you to think and come up with answers to any number of different questions, has been a great help,” he says. “Also, I have a tremendous core of friends from Dickinson … who help keep me grounded.”

One such friend is Shuster’s Sigma Chi brother Jim Gerlach (R-Pa.) ’77, who joined Congress one year after Shuster. The members of the Transportation and Infra-structure Committee have worked together to help win funding for Pennsylvania transportation projects.

Of course, those projects, often included in legislation as earmarks, can also draw criticism from outside the region. Like his father, who served as chairman of the Transportation and Infrastructure Committee, Shuster eagerly responds to accusations of “pork-barrel politics”—an issue he feels is greatly misunderstood.

“I never pass up an opportunity to stand up in public and say it’s part of my job as an elected official to bring home taxpayer dollars to the 9th Congres-sional District,” he explains. “People want to say, ‘Oh, that’s pork-barrel legislation,’ but if Bill Shuster doesn’t decide how that money’s going to be spent, there’s some bureaucrat sitting in the basement of the Department of Transportation who’s probably never been to Pennsylvania, and that’s the person who’s going to decide. There aren’t a bunch of angels around here deciding how this money is going to be spent. It’s 535 members of Congress, it’s thousands of bureaucrats downtown, and it’s a human process. It’s a competitive process … The entire federal budget is earmarks, so this notion that earmarks are bad, I think it’s just wrong.”

But it’s not the battles for funding or the constant negotiations that make staying away from his office—and, more important, spending time away from his wife and two teenage children—worth it for Shuster. The payoff, he says, is simply getting a chance to help people.

“I feel a great satisfaction when I can positively affect the lives of people in my district, the state or the nation, whether that’s through legislation or just solving problems,” he explains.

“Sometimes it’s simple things like being able to help a little old lady whose Social Security check is short by $30 or $40. That might not seem like much, but … the biggest accomplishments for me are just when I can be helpful.”