Navigating the 'Age of Polarization' 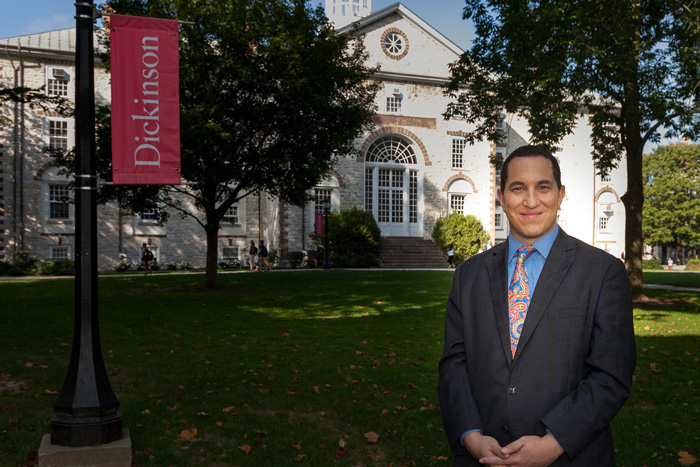 In 2012, Alexander Heffner appeared on the PBS program “The Open Mind”—then hosted by his grandfather and mentor, Richard Heffner—to give a millennial reporter's perspective on the Obama-Romney presidential race. Merely two years later, Heffner took the reins of the show. And like his mentor, who served as host for over 50 years, Heffner is bringing urgent and emerging issues to life with a fresh voice.

Heffner was recently on campus to deliver Dickinson’s annual Constitution Day Address. Titled “Civil Discourse in an Uncivil Age,” Heffner’s address covered a wide range of buzzworthy topics—from political discussion, both online and in person, to the future of the news and the way it's delivered, to Washington dysfunction. And he offered a way forward through the mire.

“Listen to new ideas with the goal of advancing discourse and understanding,” said Heffner, who follows in the tradition of such previous Constitution Day speakers as Kenneth Starr, Tom Ridge, Michael Chertoff and Kimberlé Crenshaw. He also later advised audience members to explore self-examination, to "reflect [on] how you are employing social media in your own lives and whether it is in fact to the betterment of more than the click or the like. The uncivil age doesn’t have to be permanent.”

From the start of his tenure at “The Open Mind,” Heffner has focused on “interrogating ideas” rather than people, and past episodes have explored safe spaces on college campuses (“Sanitizing Speech”), freedom of information (“Declassifying the Presidency”) and social media (“Incubators of Hate”).

“The ship of civility … has not sailed—if you take hold and steward the ship,” said Heffner, whose writing has appeared in such outlets as The Washington Post and The Wall Street Journal. “There is real opportunity to be creative and constructive at the same time. Don’t let anyone tell you otherwise.”

The Constitution Day Address commemorates the signing of the United States Constitution on September 17, 1787, and John Dickinson’s participation as an original signer. Part of the Clarke Forum’s Leadership in an Age of Uncertainty series, the event was co-sponsored by the Office of the Provost, Division of Student Life and the Churchill Fund.