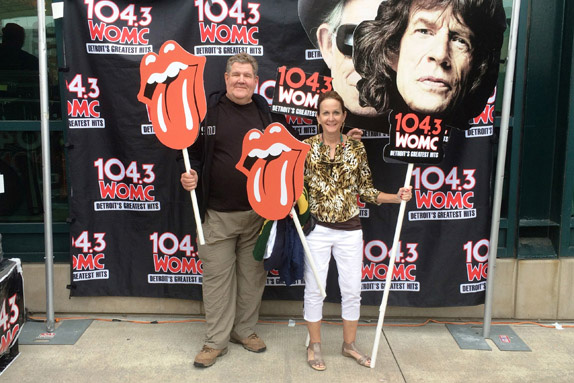 “If you want future generations to have the rich experience equivalent to yours, the only way to ensure that happens is to give personally, through your time, your talent, or your treasure.”

—Eric Evans ’78, pictured with his wife, Kyle ’78, outside a recent Rolling Stones concert

Before he ever became a history major, Eric Evans ’78 played John Dickinson in a production of the musical 1776, so he had a running start on the college’s own history. A research assistant and member of Student Senate, Evans also sang in the choir, performed in musicals and was one of the founders of Dickinson Follies, forming lasting friendships with both classmates and professors along the way.

His four years at Dickinson were book-ended by two stand-out memories, Bruce Springsteen’s concert on campus during his first year and Billy Joel’s during his senior year. After graduation, he attended Dartmouth’s Amos Tuck School of Business Administration and then got into the automotive industry, living across the globe as part of his career. He says, “I’ve been all over, and to me the richness in my career is directly attributable to my experience at Dickinson.”

Now the CFO and senior VP of GST AutoLeather, a supplier of leather for luxury car brands around the world, Evans says no matter where is he or what he’s doing, he finds threads that lead back to Carlisle: “I always say, ‘Here’s life, and Dickinson runs through it.’ ” To repay Dickinson for giving him and wife Kyle ’78 “so much,” the couple supports the college at the John Dickinson level.