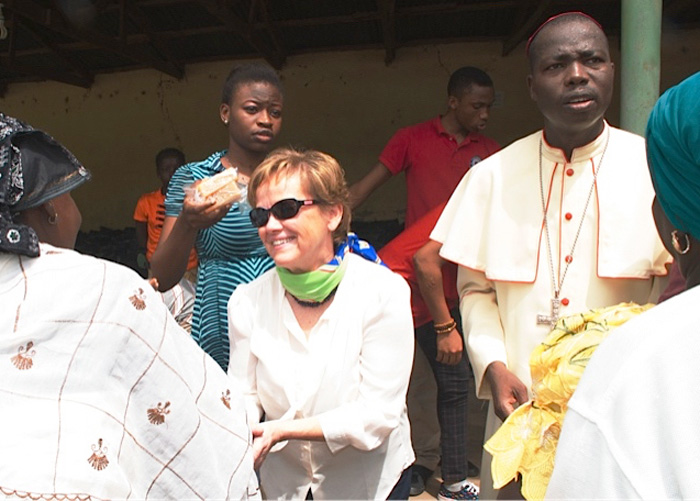 Before becoming Dickinson's 29th president, Margee Ensign was the president of the American University of Nigeria, where she co-founded and led the Adamawa Peace Initiative and helped feed refugees fleeing the Boko Haram terrorist group.

For many generations, people of different religions can live side by side in peace. Then those same religions become the basis for violent conflict, neighbor turning on neighbor. Why? Can it be prevented? Can the conflict be peacefully resolved? How?

These are the questions Dickinson President Margee Ensign will take on during a July 12 roundtable titled “Religious Identity, Belonging and Radicalization” and hosted by New York University’s Center on International Cooperation (CIC). The roundtable will provide a forum for academics, practitioners and relevant stakeholders to discuss the connections between religious identity and violence while exploring ways to help prevent that violence and foster peace.

The former president of the American University of Nigeria, Ensign was on the front lines in combating the terrorism of Boko Haram. Ensign will share her experience in Nigeria and Rwanda in peace building in the context of inter-religious tension and cooperation. “What could be more useful in our present world than the ability to understand and effectively communicate with people different from ourselves?” says Ensign, who will chair one of the roundtable’s two sessions and present a case study. “Often these differences are rooted in religion. This conference will explore the worldviews and beliefs stemming from differing religious backgrounds and identities, and how best to nonviolently deal with the conflicts and disagreements that can result.”

The session Ensign will chair is “Religious Identity and the Nexus Between Group Identity, Belonging and the Dehumanization of the Religious Other” and will feature three presentations and discussions. Some of the questions the group will address include: “What is religious identity?” “Why is religious identity important?” and “What are the factors that influence the formation/construction and strength of religious identity over time?”

“These are questions that get to the heart of the role religion plays in so many extremist organizations, of how one’s religious identity, especially as it evolves, has the power to either work for or against its members and society at large,” says Ensign.

Ensign also will deliver a presentation and lead an interactive discussion in the second session, which will explore approaches to transforming and negotiating religious identities to combat terrorism and prevent violence.

In September 2006, the U.N. General Assembly adopted the Global Counter-Terrorism Strategy to enhance regional, national and international counterterrorism efforts. One prong of the CIC’s mission is to continually examine the United Nations' operations and politics, and maximize the U.N.’s impact throughout the world through research, high-level meetings and recommendations. The roundtable will be a crystallization of that mission, focusing on ways to counter extremism, foster international good practices and explore guidelines for peace building in inter-religious situations.

The roundtable is an ideal vehicle for Ensign given her academic and humanistic interests. Before taking the reins at Dickinson, she spent the better part of the previous decade as president of the American University of Nigeria. There, she co-founded and led the Adamawa Peace Initiative, a response to escalating Boko Haram violence. The university helped feed 300,000 refugees fleeing the terrorist group as it promoted peace in the area through education, empowerment and community development.

As Ensign said in a 2016 BBC editorial, “The debate in the West about terrorism is usually presented in stark and defensive terms: increase security, curtail civil liberties and reduce the number of refugees allowed to emigrate. Is there another solution that would prevent angry and hopeless youth from joining terrorist groups?”

One of the program organizers, Jacob Udo-Udo Jacob, an NYU visiting scholar and former colleague of Ensign’s who has served at the American University of Nigeria since 2013, and Jean-Pierre Karegeye, a conference presenter from AUN, will be visiting professors at Dickinson in the fall. Other participants include representatives from such organizations as the U.N. Office of Genocide Prevention & the Responsibility to Protect, the U.N. Counter Terrorism Executive Directorate, U.N. Women and the U.N. Executive Office of the Secretary General.