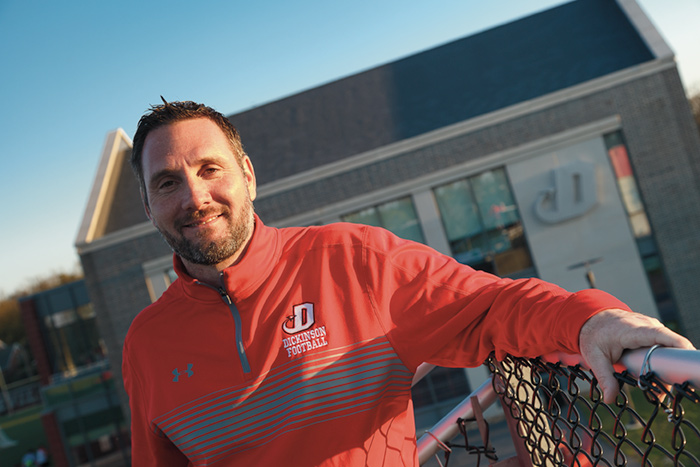 Brad Fordyce has been tapped to lead the Red Devils onto the gridiron as the new head football coach, and he’s solidifying his approach as he looks to 2017-18 to be a turnaround season.

1. What do you say to recruits to make them see what a great program they’ll be joining?

We talk about tradition and the success Dickinson has had. We refer to the school as it relates to cultivating successful people, and we speak about our players and the commitment they have to each other.

2. The Red Devils are coming off a tough 1-9 season. As the new head coach, do you have a philosophy for turning the page and working toward a winning season?

Success is a choice. Our players must understand that they make decisions daily that move us closer to success as it relates to the preparation. If we are consistent in our approach and decisionmaking and hold true to the process, we’ll be able to expect success. It’ll become a mentality.

3. What do you see as something every athlete must have to succeed?

Dedication, commitment, passion. They have to love what they do and embrace the work.

4. Do you have any coaching heroes from football’s long history that you look to for inspiration?

Both my parents were born and raised in Pittsburgh, and I loved Chuck Noll’s [Steelers, 1969-91] straightforward and intense approach to coaching. I would also say my dad, Dick Fordyce. I grew up on the sideline while he was coaching in college and then had the experience of playing for him in high school. He was intense but always did so much for his players off the field. I think he had great balance with demanding what was necessary and taking care of them. The last would be Al Thomas. I worked with him at Western Maryland (now McDaniel) College. His intelligence and work ethic were unmatched.

5. What are your early impressions of Dickinson’s athletics facilities?

I believe we provide some of the best facilities in our region. We have a great locker room [in the Durden Athletic Training Center] that houses our players all year, and the varsity weight room is a great space to help our athletes develop.

6. Dickinson is a place where the student-athletes focus equally on the classroom and the field. How will you foster that balance as head coach?

We emphasize time management as it relates to both football and school. Our players need to be aware of the time demands they have and manage them, so they can succeed in both.

7. Your two sons (Tate and Nash) might be too young to suit up and hit the gridiron, but when they’re ready, what lessons about the game do you want them to know?

I think teamwork and accountability are big ones. You have to learn to work as one unit with the same focus. The ability to rely on others and hold yourself to the same standard is important. You must be accountable to yourself and how you affect the team, and you must also evaluate your teammates to ensure that you can count on them.

8. What do you think it is about football generally that makes it so overwhelmingly popular?

Each play has the ability to change the game or create a huge momentum swing.

9. What do you think is the greatest football game ever played, either college or NFL?

I would have to go with Alabama vs. LSU back in 2011. LSU won 9-6 in overtime. I’m a defensive guy, so seeing those two teams get after each other on defense was awesome. The common fan would have thought it was boring game.

10. If you could have any NFL player put on the Red Devil football gear and play with the team for a season, who would it be?

Tom Brady. He is a straight-up winner and competitor.