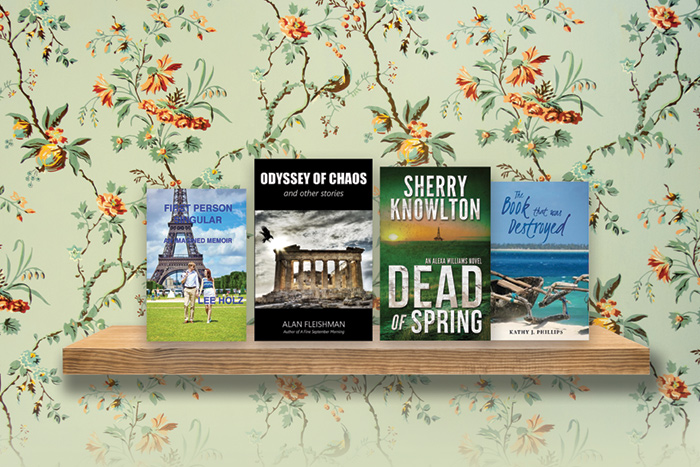 In his 11th novel, R. Lee Holz ’57 tells the story of Rob Stuart, who came of age in middle class America in the 1950s. Living and working in the U.S. and Europe in the 1960s and ’70s, he had to deal with a revolution in attitudes, expectations and behaviors relating to women and relationships. In this memoir written for his therapist, Stuart tells of his struggle to find meaning and to understand himself and those he loves.

Odyssey of Chaos: and other stories
By Alan Fleishman ’61
B. Bennett Press

With the Gestapo pounding on every door, no Jew in Athens is safe. Theo Kantos, a dress shop owner, has a desperate choice to make if he is to save his family. Does he trust the most despicable man he knows to hide them? Or does he place the lives of those he loves in the hands of a communist? Nearly 90 percent of Greece’s Jews perished in the Holocaust—the highest percentage lost in any country. Odyssey of Chaos was inspired by the true story of Alan Fleishman ’61’s Greek cousins who survived hidden in a cellar by a shepherd. Other cousins joined the partisan resistance, and others died in Auschwitz. The main story is followed by six contemporary short stories, which cover dramatic events and choices that alter the course of lives and form who we are.

When a beloved state senator plunges to his death at Alexa Williams’ feet in the Capitol Rotunda, the authorities suspect suicide. Alexa later learns that she was the witness to the senator’s murder, not suicide. Concentrating on her work, she leads a senate commission on sex trafficking, while also helping an old college roommate sue a natural gas company for their role in causing her daughter’s rare cancer. In researching the lawsuit, Alexa becomes embroiled in the high-stakes politics of fracking where she is drawn to a charismatic state legislator who’s leading an anti-fracking crusade. When Alexa narrowly escapes a sniper’s bullet, she must discover why she’s a target and whom can she trust. This is the third book in Sherry Knowlton ’72’s Alexa Williams suspense series.

The Book That Was Destroyed
By Kathy J. Phillips ’72
CreateSpace

Combining a sense of urgency with the uniting theme of friendship, The Book That Was Destroyed tells a cautionary and inspiring tale of politics and rallying for your beliefs. Teacher Ginn McGonagle finds pieces of a manuscript in an old Pennsylvania farmhouse written by Lydie, a 19th-century Shaker woman. The old scraps reveal a pacifist and socialist woman concerned with community and the environment. Ginn reaches out to Honolulu librarian Van Carreira, who may hold the historical records that will shed light on Lydie’s life. Why did Lydie’s brother try to destroy the manuscript?  And how do Lydie’s beliefs relate to concerns of fracking and global warming in the 21st century? This is the fifth book published by Kathy Phillips ’72, a professor of English at the University of Hawaii who has lived in Honolulu for 40 years.