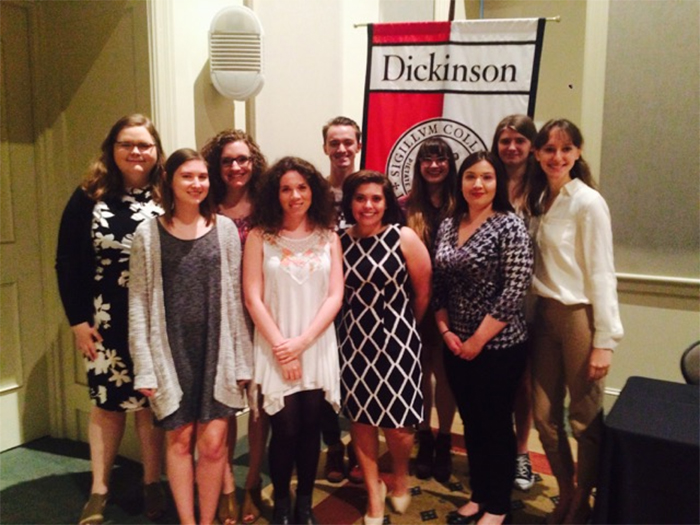 Bianca LoGiurato '17 began with a simple idea: to study Katherine Bradley and Edith Cooper, an aunt and niece who wrote jointly under the pseudonym Michael Field. Reading their Victorian-era journals and poems closely, she found references to incest, an aspect of the women’s relationship and work that, she learned, the academic community largely denied or ignored. So began LoGiurato’s bold intellectual journey—beginning with broad inquiry and ending with new original research.

LoGiurato discussed her work during the 2017 Research on Women and Gender by Students (ROWGS) symposium, a public event sponsored by the President’s Commission for Women, Gender & Sexuality and the Department of Women’s, Gender & Sexuality Studies (WG&S) that brought together students from different majors to share original research on women, gender and sexuality. Held April 20, the symposium included presentations by nine class of 2017 members and one rising junior, whose scholarship drew from the humanities, languages, social sciences, arts and health science.

LoGiurato (women's, gender & sexuality studies, Italian & Italian studies) used literary analysis to argue that the women behind the Field pseudonym believed that incest made their bond stronger. It was an eye-opening research experience, she said, explaining that Field scholars who do address the issue of incest typically refute it and, sometimes, reveal explicit or implicit biases.

Danielle Melnick ’17 (women's, gender & sexuality studies) plans a career helping victims of sexual violence and will enter a clinical-psychology program at Columbia University focusing on mind-body practice this summer. For her senior thesis, she studied ways that intellectually disabled individuals understand and experience their sexuality—a little-understood issue, she said, as caretakers, sexuality-studies educators and others often view intellectually disabled persons as asexual, childlike or even hypersexual. Melnick, who conducted original research on food justice last year, also shone a light on reproductive-justice in that population and argued that intellectually disabled individuals need to be empowered to make independent choices.

Some students folded international experiences into their research. Margot Abrahams ’17, (women's, gender & sexuality studies) focused on dance as a form of protest for feminists and women in India, a topic she chose after a winter-break trip to that country. While there, she toured with a dance company, the Vanaver Caravan, met dancer/activist Mallika Sarabhai and learned firsthand about arts, activism and feminism in the fast-growing nation.

Thera Dal Prà Iversen '17 (Italian studies, English) researched a series of books by Italian author Elena Ferrante about two friends who spent most of their lives in Naples, Italy. Iversen's work included research she conducted during a winter-break trip to places depicted in the books. “Doing this kind of research—exiting out of the sphere of close reading, in a way, gave me a much deeper understanding of how the city shapes the characters of the novels,” she said.

Kayleigh Rhatigan ’19 (English) also drew inspiration from her own experiences as she examined how the novel Bless Me, Ultima, by Rudolfo Anaya, is commonly taught in high schools. In her paper, she contended that when educators present the book as a tool to learn about Chicano culture, rather than as a piece of literature, they perpetuate gender stereotypes. “The research process led me to many new questions about literature in secondary education today,” she said.

For Olivia Poulin ’17 (English, Italian, creative writing), who plans a secondary-education career, that process began with a paper about the history and academic institutionalization of the short story, which included a section on Nobel Prize-winning short-fiction writer Alice Munro. As she wrote, Poulin discovered a fascination for the ways in which Munro depicted education and intellectualism in the lives of her women characters. Poulin's final project—combining her interests in education and education history, literature and literary history, creative writing and women’s studies—soon took shape.

Poulin said the benefits of working on a large-scale project like this are far-reaching, since the experience not only brought her to new researching and writing heights, but also taught her to trust in her scholarly and writerly intuition and skill.

LoGiurato agreed. “It was daunting to go against what important people were saying,” she said, “and it sounds superficial, but I learned that my voice has a place in the academic community, and that my research is valid.”