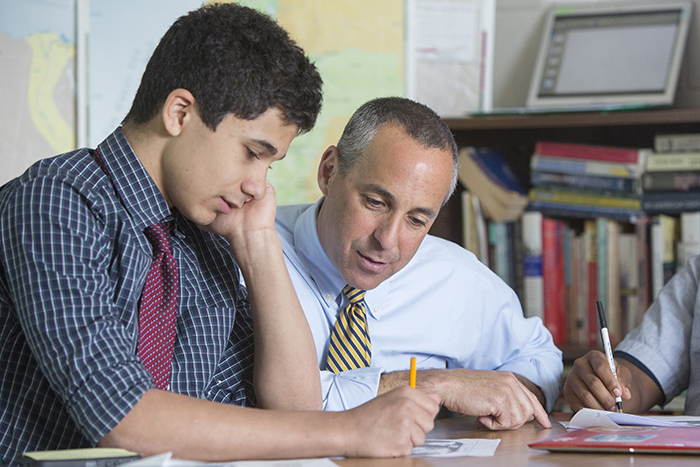 A former history major, Glenn Whitman '91 teaches history and coaches women's soccer at St. Andrew’s Episcopal School in Potomac, Md., and he directs the Center for Transformative Teaching and Learning, where he helps teachers understand the educational neuroscience research behind the learning brain. That work led him to co-author Neuroteach: Brain Science and the Future of Education.

When I first came to Dickinson’s campus in fall 1987, I had no idea what I wanted to be when I grew up. And that was a good thing and one of the reasons why I chose a liberal-arts college. As an educator, I do find myself falling back on the breadth of academic experiences I had at Dickinson. In fact, the Music 101 class that I took with Fred Petty was the foundation for a blog post I wrote for Edutopia titled “4’33” (Four Minutes and Thirty-Three Seconds): What Our Brains Need.” But in the end, the relationships that I was able to foster with professors, such as John Osborne and Phil Lockhart, were truly transformative for my future. Both of these men altered my professional trajectory and continue to impact my teaching at St. Andrew’s Episcopal School. Professor Lockhart initially introduced me to the independent-school sector, where my passions for history and coaching would be equally valued. Professor Osborne introduced me to oral history in a Historical Methods class I took at 8 a.m. as a freshman. That experience led me to create a similar oral history project for my students that has led to the largest precollegiate oral history project in the United States, and to a book I wrote, Dialogue with the Past: Engaging Students and Meeting Standards Through Oral History.

Being a Division III varsity soccer player and golfer were incredible experiences. My times with my fraternity brothers in Kappa Sigma and with my fellow White Hats were full of laughs, a few sketchy moments and enduring memories. Drinking red wine as part of a history independent study with Professor Clarke Garrett was also most enjoyable.

On the academic front, interviewing three Vietnam veterans on the 1968 Tet Offensive in the Carlisle VFW Hall affirmed my passion for history and my desire to be a history major. On the athletic front, winning back-to-back Middle Atlantic Conference golf championships with Coach John Brown and a great cast of golfing characters was pretty special. There was a little more pressure on us to win the second championships when we realized that we failed to bring the winning trophy from Carlisle to the tournament course. If we did not win, another team would have been unable to receive the trophy. Thankfully, we did not have to address that issue; the team pulled it out in the end.

At the three independent schools where I have taught since graduating from Dickinson, I have taken great pride in encouraging students to consider the school. I am proud to say that I have now written recommendation letters for nearly 40 prospective Dickinson students and that 15 have attended the college. If I do the math correctly, with the average tuition spread out over the last 20 years of about $40,000, then I have generated $600,000 (pre-aid) for the school.

Two moments at Dickinson changed my professional trajectory. The first was when fraternity brother Pete Gilbert ’88 was back on campus during my junior year. He told me about the great opportunities to both pursue my passion for history and coaching soccer at an independent school. Second, my relationship with Professor Phil Lockhart. Even though I never took a Latin class, Professor Lockhart was very much in tune with the independent school world and was a great mentor in helping me to navigate that career possibility. What I love about teaching is the challenge to figure out how the organ of learning—the most complex organ in the body, the brain—works, learns and thrives in the classroom and on the athletic fields. It has led me to an unanticipated professional trajectory of directing the Center for Transformative Teaching and Learning at St. Andrew’s Episcopal School.

Teaching, in itself, is a challenging but highly rewarding career. Trying to figure out the most complex organ of the body, the brain, compounds that challenge. I guess it is because of this daily challenge that I so love being an educator.

Completing the Boston Marathon was awesome. Getting married and having two incredible kids is truly a blessing. Having my first hole-in-one was pretty cool as well, but more luck than skill seemed to be involved.

I would go back to a time when my mother was alive and play one more round of golf with her.

The results of the 2016 presidential election.