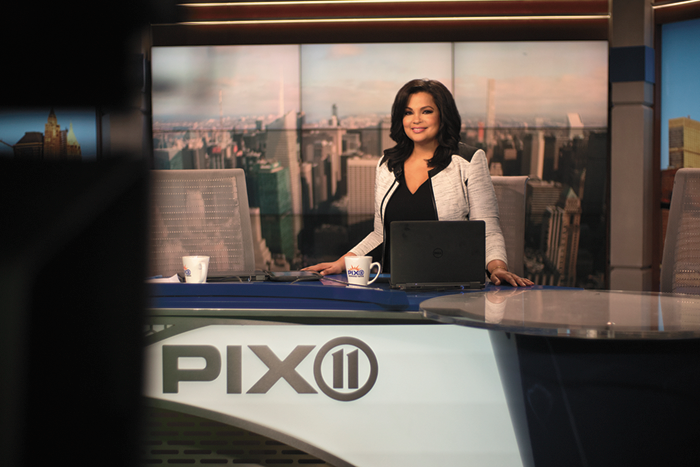 Longtime NYC morning news anchor Sukanya Krishnan ’93 shocked millions of viewers last week, when she announced she’d be leaving her post after 17 years at the helm. In an emotional May 2 broadcast, Krishnan, the first Indian-American woman to break into the nation’s top news market, thanked her viewers for giving her “the confidence to be me, the strength to embrace every challenge,” and in a May 8 Facebook post, she gave a shoutout to the Dickinsonians who helped prepare her for that role:

“Many valuable lessons are learned when you are young. My teachers and professors have always been the ones who believed in me and inspired me to be the person I am today.”

In the article below, written a few months earlier, Krishnan recalls those lessons learned and the lifelong friends she made at Dickinson. She also recounts her post-graduation road to a long career in an industry marked by rapid-fire change.

There’s a reason they call it the “city that never sleeps,” and no one knows this better than Sukanya Krishnan ’93. A six-time Emmy Award winner and the first Indian-American woman to anchor in the nation’s top news market, she’s up at 2:30 a.m. and on air by 6, bringing the news, in her relatable style, to more than three million viewers across three states. Seven hours later, she drives home, has an hour or so to herself, then starts dinner for husband Eric Schroeder, a New York City Fire Department captain, and two young children, Kiran and Shyla. Then it’s family time, four or five hours’ sleep, and at it again.

“You get used to it,” she says with a laugh, noting that while much has changed in the decade-plus she’s anchored the morning broadcast at WPIX11, the bustle is a constant. “But you definitely have to be passionate about what you do.”

Born in India and fluent in Tamil, Krishnan immigrated to the U.S. with her parents, both doctors, when she was a child, and grew up on Staten Island, N.Y., where she attended public schools. She discovered Dickinson during a college fair in Madison Square Garden, and welcomed the change of pace that a small, liberal arts college would bring.

"The front door wasn't always open to me, as a person of my origin and background ... but my professors were pivotal in helping me understand my value, and how to be a standout."

The adjustment wasn’t always easy, but Krishnan formed close relationships with faculty and classmates; declared a Spanish major; studied abroad in Málaga, Spain; and served as president of her senior class. “I sometimes struggled, but my professors were really there for me,” she remembers. “They taught me life lessons I still use today: Never give up, and if one door closes, pry open a window. Find another way in.”

After graduation, Krishnan cut her journalism teeth as an intern in Long Island, where she honed her shooting and editing skills, and then made her on-air debut at an ABC affiliate in upstate New York. Back in central Pennsylvania, she reported for WHP-TV on the TWA flight 800 explosion and Million Man March, then returned to New York as general-assignment reporter for CBS2.

“It was an opportunity of a lifetime, and it was pretty incredible to walk in the door and see Ed Bradley in the cafeteria, and Mike Wallace and Dan Rather at the CBS headquarters,” says Krishnan, who covered the Clinton impeachment proceedings and Sammy Sosa’s home-run record during her four years with the network. “That’s when I decided that if I wanted to become part of this, I had to step up my game and create a space for myself.”

Krishnan found that home at the CW’s PIX11, and her career-defining moment arrived on Sept. 11, 2001, when she delivered updates of unfolding events at World Trade Center to an anxious city and world. Krishnan’s Morning News broadcast from that day is featured in the National September 11 Memorial & Museum in New York, and it earned Krishnan her first Emmy.

Five more followed, along with awards from the New York City Comptroller’s Office and the Friar’s Club; a Certificate of Merit from the New York State Assembly; and the Shirley Chisholm Women of Distinction Award. City & State Magazine named Krishnan a “Woman of Distinction and Moves Magazine, a “Power Woman”—an apt title, as she balances the demands of a 24/7 news cycle with family life and charitable work with New York Police and Fire Widows, World Cares, the Children’s Benefit Fund and the Indian-American Political Awareness Committee. Krishnan has also appeared in several documentaries, hosted the syndicated NBC/Universal  show Home Delivery and played herself in a 2004 episode of The Sopranos.

Over the years, she’s seen sweeping changes in her industry, brought on by expanding cable news coverage and the advent of social media. Krishnan stresses that the critical-thinking skills she gained at Dickinson helped her evaluate sources, report on a wide range of topics and adapt to a continually evolving media environment. And at a time of intense national conversations about public perceptions of the media, Krishnan remains a trusted source for millions of viewers, well known for her straight-talking commentary and relatable persona.

Krishnan’s also seeing more diversity on air. She says that the encouragement she received from her professors helped her develop a strong sense of self that propelled her at the start of her career, and continues to do so, as she shepherds viewers through natural disasters, 9/11 anniversaries, local and national elections and other news, big and small.

“The front door wasn't always open to me, as a person of my origin and background—an immigrant to this country—and the welcome mat wasn’t always out,” she says, “but my professors were pivotal in helping me understand my value, and how to be a standout. They helped me realize that if you work hard, and if you know what you bring to the table, you will always be an asset, wherever you go.”