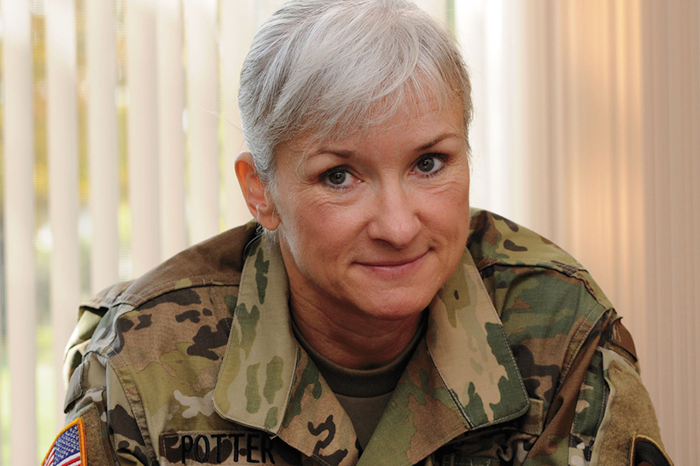 In Uruguay, she taught Spanish to U.S. Army Intelligence officers posted in Latin America. In the Republic of Georgia, she communicated in Russian with locals and peacekeepers during a United Nations mission. And in July 2016, Brigadier General Laura Anibal Potter ’89 (one of only a few women generals in the U.S. Army and the first female Dickinson ROTC grad to attain that rank) assumed her current position as director of intelligence for the United States European Command, headquartered in Germany.

“One of the greatest benefits I gained from my Dickinson experience was critical thinking,” she says. “I don't think we called it that when I went there, but it was the idea that students could analyze an issue—whether in literature, history, religion, art or science—and think about it beyond what was written in the text or conveyed in the lecture; learn how to debate it amongst ourselves; and learn how to draw our own conclusions and stand by them with conviction.”

"One of the greatest benefits I gained from my Dickinson experience was critical thinking."

That correlates directly to the work Potter has been doing, like collaborating with the militaries of 28 NATO nations and multiple partner nations across Europe. And clearly her language fluency has helped as well.

“Thanks to my Dickinson classroom experience, immersion programs and teaching assistant opportunities, I left Dickinson College fluent in Spanish and Russian, which helped me in countless ways throughout my career.”

That career has spanned 28 years, during which Potter created her own path, often chalking up “firsts” for women in her field.

“Those firsts are not a reflection of my effort to seek out positions in order to break a barrier,” she says. “Instead, they are a reflection of the path our Army has been on that has seen an increasing number of opportunities open to women. I have been fortunate at every stage in my career to take advantage of those great opportunities. With the [2016] Department of Defense decision to open all positions to women, the female ROTC cadets of the class of 2017 will have unlimited opportunities open to them.”