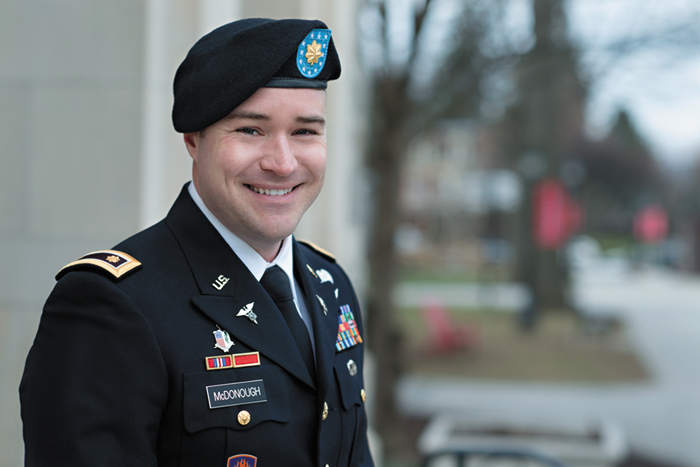 Major Robert McDonough ’06 had visited more than 40 countries and spent most of the last 11 years of military service outside the United States. Most recently the U.S. Army pilot had been stationed in Germany and South Korea before spending 16 months as a company commander at Fort Riley, Kan., and is still on active duty awaiting the next assignment while he completes his master’s degree at Shippensburg University.

“Americans need to engage the world,” he says. “We do that by immersing ourselves in cultures unlike our own. Gaining a global perspective of how foreign nations and cultures deal with problems will assist us in decision making and positive change here in the U.S.” And McDonough certainly has made positive change, in particular serving as a leader and role model for 174 soldiers and their families within the 1st Infantry Division.

“Leadership is a tremendously humbling experience,” he says. “I’ve been fortunate to meet and learn from several prominent leaders at Dickinson. Former President Bill Durden [’71] and trustee Woody Goldberg [’63] practiced effective self-sacrificing leadership. Their style of leadership set an example for both the cadets and students of the Dickinson community to emulate and served as a model for growth in my own leadership style.”

"I am inspired by the commitment of so many Americans to serve for a cause they believe in greater than themselves."

In 2010, McDonough led a group of Medevac soldiers on a mission in Kunduz Province, Afghanistan, to rescue German soldiers who had been captured. For their successful efforts, McDonough and his crewmen were honored with the Gold Cross for valor, Germany’s second highest award for valor. McDonough’s team was the first group of Americans to receive the award.

“The award was a tremendous honor,” he recalls, “and I was fortunate to have a truly exceptional group of talented and experienced soldiers who were dedicated to the mission. We built a bond of trust with the German army that went far beyond any NATO diplomatic agreement.”

McDonough continues to fulfill his lifelong dream of military service—one that began as a child and was reinforced after 9/11—motivated by the men and women who serve by his side.

“I am inspired by the commitment of so many Americans to serve for a cause they believe in greater than themselves,” he says.