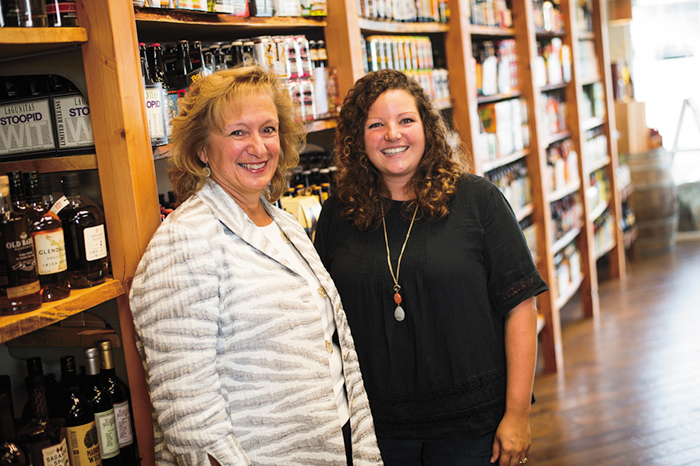 Incredible things can happen when Dickinsonians collaborate. Susan Miller ’81 and Michelle Stafford ’07 are founder and manager, respectively, of Red, a wine, beer and spirits store that specializes in organic, biodynamic and sustainably produced products. They are pioneering this customer-centric, woman-owned/woman-operated business—straight up with a sustainable, local twist. And while their meeting was a bit of serendipity, the mission and focus they share are not.

Miller launched Red in late 2014 as a personal passion project, as if she weren’t busy enough as president and CEO of the Alliance for Telecommunications Industry Solution (ATIS), advancing the technology agendas of global companies like AT&T, Verizon, Intel, Facebook and Google, serving on the board of directors of the American National Standards Institute and playing a role in a number of federal advisory committees for the Federal Communications Commission and the National Science Foundation.

At Dickinson, Miller majored in English and art history and minored in economics, and then went on to earn a J.D. at Catholic University’s Columbus School of Law. Throughout her career, Miller has been interested in sustainability issues—thanks to her role at ATIS, she has had the opportunity to advance the technology and services of the future for “smart (and more environmentally friendly) cities” or applications in the “internet of things” which will measure energy and water utilization via a smart grid. She supports many of Dickinson’s sustainability initiatives, especially the College Farm, so it wasn’t completely out of her milieu to launch a business that would marry all of her interests.

"It’s something that turned out to be hugely practical, hugely useful in a world that is moving so quickly."

Miller also points to her Dickinson education as providing the necessary grounding. “There’s a certain inquisitiveness and curiosity that was engendered by my time there,” she says. “It’s not something that’s easily quantified, but it’s something that turned out to be hugely practical, hugely useful in a world that is moving so quickly.”

Stafford, who also happened to be an English major at Dickinson and served a year in AmeriCorps, joined Red part time in 2014 and is now the store’s general manager. “What I truly grew to love about wine is that to fully appreciate it, one must master, or least gain understanding of, so many areas of knowledge: history, chemistry, the environment, farming, language, business and culture,” she says. “If you think about it, embracing the wine industry is much like obtaining a liberal-arts education, in which you combine so many unique interests into one cohesive thing.”

As Stafford notes, Red is situated in a shopping community known as Conscious Corner, a one-stop shop for environmentally conscious consumers. Its neighbors are an Earth-friendly home goods boutique, a vegan restaurant and a natural pet-food store.

“The industry has changed remarkably since I first became enamored with it in 2008,” Stafford says. “Consumers in general are more educated about what they are putting into their bodies, and that extends into the world of wine.”