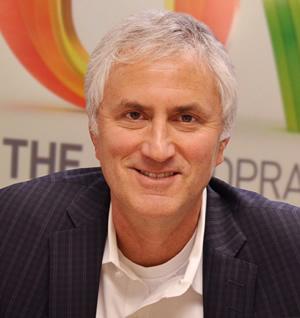 Cable-network executive matures with the market

When Allan Singer ’81 began studying law at the University of Colorado Law School, the cable-television landscape was just beginning to take shape. “I was really lucky,” he says. “When the cable industry was being created, it was out of Denver.”

After a stint as partner of a law firm, Singer joined the programming department of Tele-Communications Inc. (TCI) and helped launch the cable revolution. “We created all these networks—Discovery Channel, Cartoon Network, regional sports networks,” he says. In 2003, Singer became Comcast Cable’s senior vice president for content acquisition, where he managed the company’s expansion to include TechTV, Comcast SportsNet Chicago and PBS Kids Sprout, among others.

Now, as executive vice president for distribution and strategy, Singer is one of the architects behind the Oprah Winfrey Network (OWN), which debuts January 2011. With a line-up that ranges from “Oprah’s All-Stars”—Dr. Phil, Suze Orman and Dr. Oz—and “Our America with Lisa Ling” to reality show “Oprah’s Search for the Next TV Star,” the network is poised to introduce both familiar and fresh faces to her fan base and beyond.

OWN also will be available on multiple media platforms. “In the new media space, Oprah’s content lends itself to long and short forms,” Singer explains. “It’s a lot of being creative in technology and paying attention to where it’s going in the future. We’re very respectful of our distributor’s business, but we also make sure that the network can go other places as technology emerges.”

The former political-science major traces much of that creativity—in programming development, acquisition and technology—back to his liberal-arts experience, noting his wide range of courses at Dickinson and the opportunities for global, strategic thinking.

“The best people aren’t just negotiators; they have a financial background,” he says. “It’s also people with an understanding of technology who can look down the road. They’re entrepreneurial. There’s real value created.”