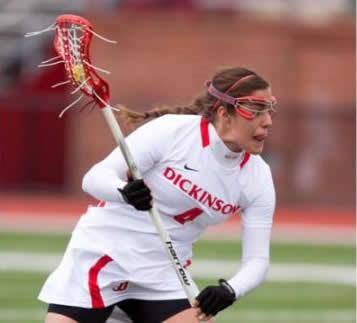 With the women’s lacrosse team as her backbone, Taryn Abbassian ’12 has gained the self-assurance to confront important issues in the Dickinson community, she says. “I don’t know if I would’ve been eager enough to pursue other goals without having the confidence and comfort that the team gave me.”

In spring 2010, the women’s lacrosse team was on the road against its non-conference rival, #14-ranked Catholic University. Facing her toughest test yet in her first year at the helm, Head Coach Carol Hatton assigned Taryn Abbassian ’12, then a sophomore, to faceguard Catholic’s best player.
“My entire focus was guarding her,” Abbassian recalls. “I wasn’t really worrying about anything else that was happening on the field.”

Abbassian shut her opponent down, making way for her classmate Kaity Moore ’12 to score the game-winning goal with just 51 seconds left on the clock. The final goal capped off the Red Devils’ late rally to overcome a 7-2 deficit and earn their fourth win of the season.
“You could tell that [Catholic] was just shocked, and it was a really exciting moment,” she says.

When the senior midfielder was asked to describe her favorite game in her four-year Dickinson career, she chose this game as her highlight. She didn’t headline the game with several goals or even get mentioned in the recap; instead, Abbassian played excellent defense, and more importantly, contributed to a crucial team win. “It’s not necessarily goals that I’ve scored,” she says. “It’s the feeling you have after a game when you know the team was playing its hardest. You can all just look at each other and say to yourself ‘We did that together.’ ”

Two years later, Abbassian has grown to embrace the leadership responsibilities that come with her role as captain. While the team fell one win short of making the Centennial Conference playoffs this year, Abbassian is confident that her team has made outstanding strides during her college career.

“Just being in a leadership role on the field, having that captain title comes with a lot of responsibility setting the tone for the team,” she says. “I think we raised the bar in terms of time commitment and intensity, and our coach trusts us to be the leaders that set that tone.”

Working with Hatton for the past three years, Abbassian prides herself on leaving the team with a foundation of integrity and passionate work ethic. With her new coach’s assertive approach, Abbassian flourished as a leader and competitor. “Our coach came in from the beginning and wanted us to pursue a higher level of preparation and intensity,” Abbassian said. “I was really on board with that. I’ve always seen eye-to-eye with her in terms of work ethic.”

A political-science major, Abbassian also is involved in several clubs and organizations, including the Kappa Kappa Gamma sorority, the Run for Steph fundraiser and the Feminist Collective. Most recently, she joined Yes Please, a peer-education group that works to inform the campus community about sexual violence. With Yes Please, Abbassian gave presentations at first-year Orientation, helped to sponsor events on campus and planned Sexual Assault Awareness Month in April.

“We really try to get an ongoing discussion on sexual violence at Dickinson,” Abbassian says. “Getting involved in Yes Please was very rewarding for me, because I can see how the program has changed the way lots of students talk about issues of sexual violence.”

Just as Abbassian worked for four years to set the tone for her lacrosse team, she used the same leadership and confidence to make a difference off the field, confronting sensitive issues to ensure a healthy dialogue for present and future Dickinsonians. “Being a leader on the team, I’ve really found the ability to confront issues head on,” she says. “Whether that’s a team goal, or an organizational goal.”