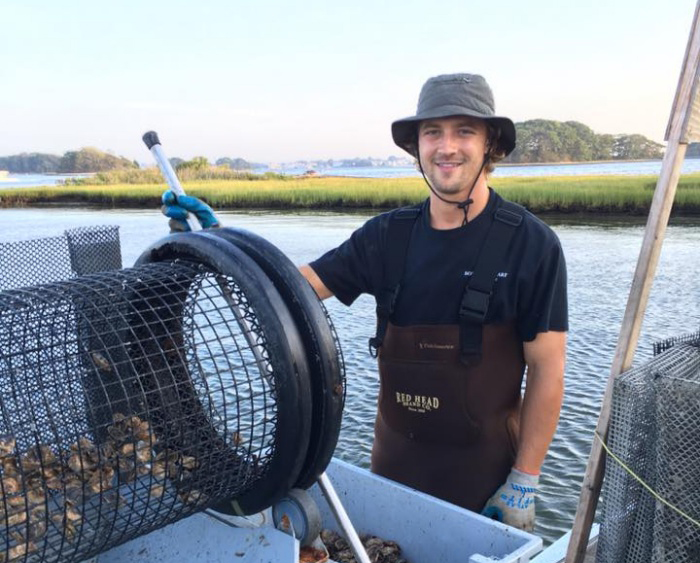 The year after graduation, Brad Boehringer ’13 worked in Latin America with community-run agricultural and mining cooperatives, and when he returned to the U.S., he brought back a desire to continue in socially and environmentally sustainable work. After reading about the oyster-farming industry, he knew he’d found a good fit. Boehringer started from the ground up, shucking oysters at a coastal restaurant and getting to know suppliers. Today, he is owner and operator of Rocky Rhode Oyster Co., a two-acre commercial oyster farm in Point Judith Pond, Rhode Island. The former international studies major buys oysters from hatcheries and research labs and maintains a clean underwater environment where a half million oysters can grow for 1-3 years, filtering feed entirely from naturally occurring nutrients and minerals. In addition to running his business and tending to his oysters, he developed a curriculum on shellfish, which he teaches to children at a neighboring summer camp.

The liberal-arts education I received at Dickinson allowed me to cultivate my interests and get a head start on my somewhat unconventional career path. As an international studies major, I focused on globalization and sustainability, [and I studied] renewable energy and sustainable development in Germany. Dickinson provided me with the structure to organize that extraordinary college experience and gave me the confidence to continue onward into a career intertwining social and natural ecosystems. I don’t think I could have received this education anywhere else.

My senior year, some of my friends and I didn’t make the cut for the school’s soccer team. We had all played on the team in previous years, but alas, we couldn’t keep up. Fortunately, we heard that some underclassmen had received funding for a club soccer program. My friends and I jumped at this opportunity. Since a few of us shared a house, it became an informal clubhouse, a place of identity. We held board meetings, fundraisers and morale-boosting events. We treated it like a business, a grand production. During our final year, we built our utopian soccer community, and we had a blast doing it.

Last fall, I heard about the food studies certificate program at Dickinson, exposing students to an interdisciplinary approach to the subject of food. I recently started a discussion with faculty about getting involved with this program. I want to see students have the opportunity to work alongside me on the farm. It would provide insights to one of the more sustainable food production industries in the U.S.

After graduation, I worked in Latin America for a year, with community-run agricultural and mining cooperatives devoted to raising the quality of life in these communities. I began looking into industries back in the U.S. that might foster a similar environment. In spring 2014, I read about oyster farming, an industry that was receiving recognition for its positive economic, social and environmental impact on the coastal fishing towns of New England, and I found an oyster farm in Rhode Island that was hiring seasonal help. I also took a night job at a restaurant, shucking oysters. Soon, I was in charge of purchasing oysters for the restaurant and was on a first-name basis with farmers and seafood distributors all over New England. I stayed on at the restaurant and worked on an as-needed basis for several other oyster farms in the area. They were all so different, with unique working environments and business models. After building a network of contacts and working with a variety of farming methods, I decided to start my own farm.

What excites you about it most?

What excites me most is that I continually meet new people whose lives and careers intertwine with my work on the water. Rhode Island is a tiny state with a deeply rooted connection to the ocean. The universities lead research on coastline restoration and fishery management, high schools teach marine technology and every town has a restaurant claiming the freshest local catch. Almost every Rhode Islander has a relative who will gladly recount their family’s trips to the beach. Equally exciting is having an “office” that is outdoors.

What's the most challenging part of your work?

First, working outdoors. The tides, the seasons, the water temperature dictate the time of day that I’m out on the water, the protective clothing I must wear and the growth rates of the oysters. I have calendars and charts to help me best predict what I can accomplish during any given week, but strong winds alter the tides, an impending hurricane halts normal work procedures and demands several days of bracing the farm for severe impact, and the temperature changes alone can also change my work environment and schedule.

Second, I wear many hats. I’m the accountant, the salesman, the marketer, the teacher, the tour guide and, of course, the farmer. It’s demanding, but it’s invaluable to be able to develop so many skills.

Learning to surf has significantly improved my quality of life in Rhode Island. I’ve met a lot of neat people through it, and it continues to challenge me, both physically and mentally.

Tim Ferriss. He’s a bestselling author and also runs a podcast, The Tim Ferriss Show. I haven’t spent much time with his books, but his podcasts have been a valuable learning tool for me. He’s exposed me to a number of lifestyle designs and philosophies that have helped me become a more self-sufficient, healthy and happy person.

You just built a time machine. Where and when do you go?

Back to the 1960s. I would like to experience [that era’s] many successful social movements and its music. A few live shows would be on my to-do list.

Unfortunately, since graduation, my close friends have mostly relocated and are scattered across the globe. I would like for us to all be a bit closer in proximity to one another. However, I now have a number of adventures to go join them on, in their own necks of the woods. So I guess it’s a tough decision. Maybe to breathe underwater.

Boehringer is eager to connect with Dickinsonians who may have questions about his work and invites them to reach out to him through email, rockyrhodeoysterco@gmail.com, or Instagram, @rockyrhodeoysterco.