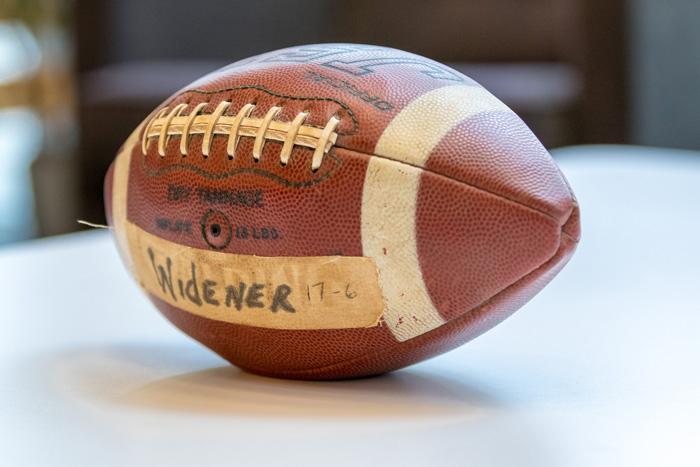 "It was like Braveheart," recalls Jack Maley '79, who as quarterback led the Red Devils to their upset victory over Widener. "I fully expected them to come bursting out of the locker room half-naked and painted."

Everyone has a favorite sports upset story. Maybe it’s the U.S. men’s hockey team knocking Russia out of the 1980 Winter Olympics. Or maybe the 2008 New York Giants ruining the New England Patriots’ perfect season by beating them in Super Bowl XLII.

For Dickinson football, it’s the game played against the Widener University Pioneers on Oct. 9, 1976, a game the Red Devils were never supposed to win and one that had them coming in 40-point underdogs.

“Even if the sun is shining it will probably be very gloomy for Dickenson [sic] again,” predicted the Widener school paper, The Dome, while reminding readers that the previous matchup found Dickinson falling to the Pioneers by three touchdowns. The Dome was right about one thing: The setting was about as gloomy as it gets.

“All that week, it just poured, day after day,” recalls Jim Gerlach ’77, who spent the day coming out of the swampy backfield as running back. “We weren’t even sure whether the game would be called at some point because the conditions were so sloppy.”

Maybe fate was trying to cut the Devils a break. After all, Widener was ranked No. 6 in the country, boasted the No. 4 offense and averaged 335 rushing yards per game. Billy “White Shoes” Johnson, who’d gone from Widener to the NFL and would become one of the league’s greatest return men, had previously made mincemeat of the Dickinson defense.

“Widener was intimidating—the school attracted big guys and great athletes, and the team did these crazy calisthenics before the games, wanting you to give up before the game ever started,” says Jack Maley ’79, the team’s quarterback. “It was like Braveheart: I fully expected them to come bursting out of the locker room half-naked and painted.”

“I was optimistic, but you never know,” says Wilbur “Goby” Gobrecht ’52, Red Devils football coach from 1965 to 1979 (and also in 1984) and has written a book about the history of the Dickinson football program. “Now, they were on a 15-game winning streak, and I realized that, but you try not to get that involved in talking about it. We wanted to win the game.”

Widener hadn’t lost a game in two years, but, covered head to toe in mud and soaking wet, and on the back of what Gerlach calls a “total team win,” the Red Devils took down the Pioneers 17-6.

Forty years later, on another rainy October Saturday, the hugging resumed, as the team and coaches got together to celebrate the game.

“The reunion was further proof that time is an illusion,” says Maley. “From the moment we met up, we moved seamlessly and joyfully from 1976 to 2016. The friendships were strong, authentic and a reminder that sports are far more than athletic events.”

Those friendships were honored when the team was recognized during a pregame ceremony before the current Red Devil team hit the gridiron against Franklin & Marshall College, and a tailgate and team celebration followed, featuring footage of the landmark game cut to ’70s music.

“For me, while the reunion was to celebrate participation in a great football game, the best part of the event was just reconnecting with old teammates and friends,” says Gerlach. “What a great bunch of guys, who were a lot of fun 40 years ago and still are today!”

“A game like this, it’s just a game, really,” says Maley. “But in this case, it isn’t. I played football for a long time, and this is the best life experience I can remember. I took away that anything’s possible. In the back of your head, it’s like, ‘We beat Widener. I can do this.’ ”

And speaking of Widener, let’s cut to the opening of another Dome article, one covering the big game and running the next day: “This article is difficult to write …”