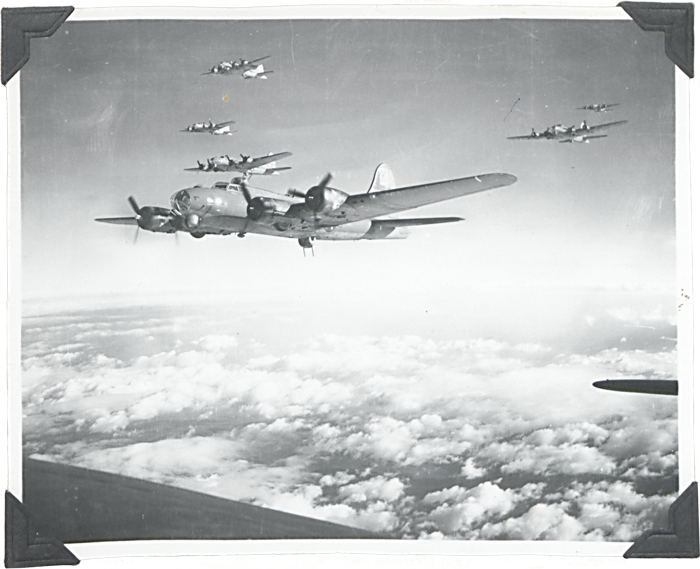 When hundreds of Japanese fighter pilots attacked a Hawaiian naval base on Dec. 7, 1941, they steered a two-year conflict, distant to many Americans, onto U.S. soil. Ralph Leland Minker ’47, a first-year history major at Dickinson, had just finished a roast beef dinner and was on his way to Conway Hall when he heard the news.

“At first there was a period of intense excitement and anxiety: What was going to happen?” Ralph—known as “Lee” to his family—later wrote. “After the New Year, a nervous calm prevailed but war became more real.”

This snippet is from just one of hundreds of letters Ralph penned to his family from 1942-45, chronicling his journey from undergrad to World War II commander and bomber pilot. Together with hundreds more mailings from his parents and sisters, the letters provide a vivid account of the war, viewed from battleground and homefront alike. 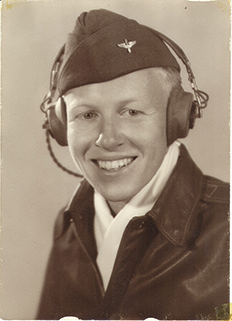 The Minkers settled in Wilmington, Del., where Ralph Sr., a Methodist pastor, also worked as a reform school superintendent, and for a decade, the family lived on school grounds. Ralph Jr. was a high school class president and, despite his small frame, played second-string quarterback. He arrived at Dickinson at age 17 in the fall of 1941.

Too young to enlist when America entered the war, Ralph volunteered for a military preparation program on campus that included accelerated classwork and rigorous phys-ed courses. Fourteen months later, he’d completed three semesters of credits and was ready to ship off to Florida for basic training.

That train ride south was an adventure for the 18-year-old, who’d always wanted to travel, but had only ventured about 125 miles from home. And within just a few months, Ralph saw another boyhood dream come true when he climbed into a cockpit and learned to fly.

“There seems to be nothing at all around you—you’re floating in midair, but with the awful roar of the Franklin 65 H.P. engine in your ears,” Ralph wrote home from flight camp in Nebraska. “The ground looks just as if it were a picture by Stephen Curry.”

Ralph went on to pass his flight tests with flying colors, “feeling rather cocky,” he wrote from the classification base in California where he was stationed along with Joe DiMaggio. By the time he was assigned his B-17 crew, however, the weight of responsibility was beginning to sink in. “I hope I’ll make a good leader,” he wrote to his father. “Now is when it counts.”

Dispatches from the homefront

When Ralph Sr.’s secretary joined the WAVES (Women Accepted for Volunteer Emergency Service) reserve, Edna filled in. In June 1943 she wrote to her son, “Maybe you will be surprised to learn that your mother is a ‘working lady’ now.”

Writing twice-weekly letters on the school typewriter, she provided church and family news and work gossip; she also sent packages of cookies and hard-to-find items, like film.

As Shirley finished high school and began college, she saw many friends leave for war. She wrote to her brother of military leaves and school goings-on, including an informal and female-dominated prom.

In between jokes and news, Bernice discussed a program to keep soldiers’ farms afloat, a teacher who joined the Red Cross, the scarcity of Hershey bars and a school air-raid evacuation in December 1943: “I had to get all of the ‘Ag’ boys in from outside. They were in the chicken house, and if you know what bedlam is, you can well imagine me trying to holler, ‘Air Raid, follow Plan B,’ over the chickens’ protesting clucks.” 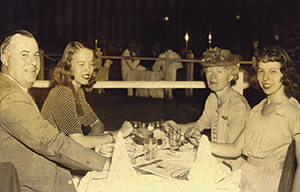 Ralph received his wings and commission as a second lieutenant on March 12, 1944. After co-piloting two missions, the youngest member of the 447th Bomb Group was ready to take command of his own crew.

Ralph went on to aid battles in Rhineland, the Ardennes region and central Germany flying 15 missions in support of ground troops during the Battle of the Bulge. His most nail-biting moment arrived when he nearly ran out of gas after bombing a Berlin train station and landed the B-17 on little more than gas fumes. Ralph was promptly inducted into the “Lucky Bastards Club,” reserved for those who flew 35 successful missions. He also earned the distinction of being the youngest 447th pilot to complete a 35-mission tour.

When V-E Day arrived, Ralph sent news of “the joy and thanks deep in the hearts of those of us in the service,” while his father wrote about “how the Nazi ideology could so completely grip people … the ‘spanking’ we have given them is just the beginning of the work necessary to a changed point of view.” The Minker women’s letters were less introspective. Edna focused on her son’s safety, his sacrifices and work yet to do, while Bernice was outright unimpressed: “I rather expected shouting and parades, but it’s just another day when we sit with ears glued to the radio, hoping for news.”Although his job was officially over, Ralph volunteered to stay on and fight, much to Edna’s dismay. By war’s end, he was a captain with an Air Medal and five oak leaf clusters, and he’d flown 37 missions—all before age 21.

Memorializing a life of service

Ralph set sail for home on the HMS Queen Elizabeth, playing cards with fellow pilot Jimmy Stewart during the voyage. He returned to Dickinson and graduated with his history degree in 1947, followed his father’s footsteps to Boston University of Theology and was ordained in 1951.

Two decades later, after serving 11 churches and raising two children with first wife Peggy Ann, Ralph launched a career-counseling business. He married Sandra O’Connell in 1980, and they lived in Reston, Va. After Ralph’s 1995 Alzheimer’s diagnosis, he and Sandra decided to donate the family’s 656 WWII letters, recognizing their value to history.

The originals are housed at the Delaware Historical Society (DHS), with copies in the Dickinson archives; Ralph and Sandra also co-published a 2005 book about the collection with historian Harry Butowsky. In 1999-2000, Patrick Stevenson ’01 conducted an oral history of Ralph, published on the Dickinson website; they remained friends until Ralph’s death in 2008.

Last year, Sandra spearheaded a project to digitize the letters, with additional support from her sister, Sharron E. Juliano, and the Ralph Minker Peace Fund for Student-Faculty Research at Dickinson College. Patrick Kennaly ’17, a double major in history and Russian, helped prepare letter abstracts through a Dana Research Grant-funded project led by Associate Professor of History Jeremy Ball. The Minker family collection was made available on the DHS website last spring.

“Reading the letters was quite a privilege for me, especially as a history major, as I was able to work with such a large collection of primary sources that were very personal to the family,” said Kennaly, who was struck by the letter-writers’ distinctive tones.

As Sandra notes, the online collection invites people worldwide to discover “not only the history of World War II, but also the values of doing your duty, love of country and family and shared sacrifice,” and she’s already tapped the online resource to help teach students about history and the value of letter-writing. Sandra is working with the DHS to develop online resources for further educational use.

“This is a legacy that is continuing to share the values of the generation that won our freedom,” she adds. “Seventy years later, young people are learning about the war and the people who lived through those days through these letters.”  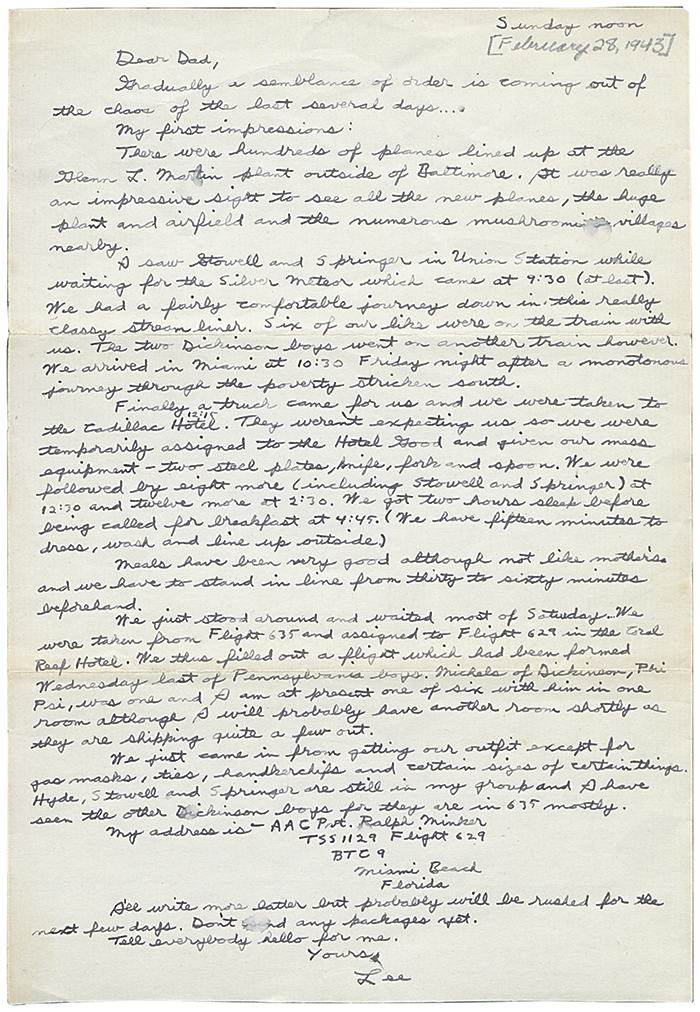