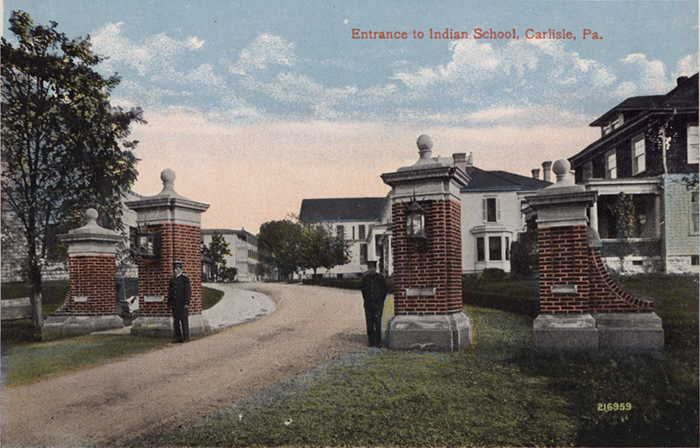 “I Lay on the Floor: Meditation on a Die-In” by Patricia van Leeuwaarde Moonsammy, assistant professor of Africana studies, was published in Anthropology Now, 8.1, 127-129 (2016).

Susan Rose, Charles A. Dana Professor of Sociology and director of the Community Studies Center, co-edited Carlisle Indian Industrial School: Indigenous Histories, Memories, & Reclamations (University of Nebraska Press, 2016), which captures the voices of students and descendants of the Carlisle Indian Industrial School (1879-1918) as well as poets, activists and the latest research by Native and non-Native scholars. Read more at dson.co/rosefof.

James Sias, assistant professor of philosophy, published The Meaning of Evil (Palgrave MacMillan, 2016), which presents an in-depth, innovative look at the psychologies of those of have acted in ways widely regarded as evil. Read more at dson.co/siasfof.

“The Lazy Susan,” a poem by Associate Professor of English and Poet-in-Residence Adrienne Su, was published in the Nov. 7 issue of The New Yorker.

Associate Athletic Director and Head Men’s Lacrosse Coach Dave Webster ’88 will be inducted into the Central Pennsylvania Chapter of US Lacrosse’s inaugural Hall of Fame for “pioneering record setting lacrosse  at his alma mater.” Read more at  dson.co/websteruslax.

Associate Professor of Music Amy Wlodarski’s book, Musical Witness and Holocaust Representation, received two awards at the American Musicological Society (AMS) meeting in Vancouver, Canada, in November—an Honorable Mention for best publication of 2015 from the Jewish Studies and Music Study Group of the AMS, and the Lockwood Award, which honors the best publication by an emerging scholar in 2015.

Neil Diamant, professor of Asian law and society, who studies veterans’ issues, was quoted in an Associated Press article and The Wall Street Journal related to Chinese veterans protesting for better benefits.

Professor of Earth Sciences Benjamin Edwards was interviewed by the National Science Foundation as part of a series on geosciences risk and resilience. View the Q-and-A at  dson.co/edwardsnsf. He also produced a video, “Pronounce That Volcano Name!,” to walk viewers through pronunciations of the 10 toughest volcano names on the planet. Watch it at dson.co/volcanonames. He also discussed his study of past under-ice volcanic eruptions and future dangers from the meltwater floods they cause for a story on Eos.org.

Amy Farrell, professor of American studies and women’s, gender & sexuality studies and John J. Curley ’60 and Ann Conser Curley ’63 Faculty Chair in the Liberal Arts, was quoted in an article in The Atlantic, “Donald Trump’s Double Standard on Weight.”

Professor of Political Science Jim Hoefler and his students collaborated with WITF’s Transforming Health to create a website, findingpeace.transforminghealth.org. It is a resource on end-of-life issues and options for caregivers. Jim interviewed medical experts, bereavement counselors and families across the country during his sabbatical. Dickinson and the Mellon Foundation funded the project, and Hoefler was interviewed about the project on WITF’s Smart Talk.

Associate Professor of Sociology Erik Love discussed Donald Trump’s anti-Muslim rhetoric in a story that ran on Vox.com. His op-ed, “Leading Republicans Plumb the Depths of Racist Islamophobia,” ran in The Huffington Post.

Kathleen Marchetti, assistant professor of political science, was featured on ABC27 news as part of a study on how Pennsylvania’s suburban middle-aged women could decide the election.

Stefanie Niles, vice president for enrollment, marketing & communications, was included in a feature in The Washington Post, “What college admissions officers say they want in a candidate,” in August.

Director of Institutional Research Jason Rivera had two op-eds published in Diverse: Issues in Higher Education: “Free College for All, but Where’s the Choice?” and “At the Bottom of the Resource Gap Lies the Diversity Desert.”