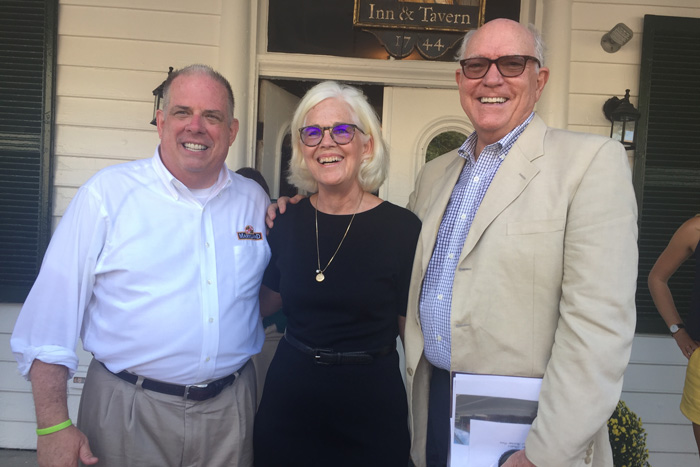 For almost two decades, Jim Sharf ’65 has been CEO of Employment Risk Advisors, Inc., with clients ranging from American College Testing and Educational Testing Service to the American National Standards Institute and the National Research Council. The former chemistry major, and current sailplane and sailing enthusiast, has taught graduate students at American University and George Washington University, while not busy restoring and preserving historic sites with his wife, Charlotte. Read on to see what Sharf looks back to from his Dickinson days and what industrial psychology is all about.

Can you speak to how Dickinson’s useful liberal arts approach helped you along your career path?

I have always been interested in science, as evidenced by my high school science fair win, which got me to the AT&T Murray Hill labs, where the transistor had been invented. So my chemistry major lab time was learning real-time, scientific-method problem solving. Now as a Ph.D. scientist/practitioner industrial psychologist, my career has focused on the research documenting that individual differences in both cognitive and noncognitive abilities are valid predictors of job performance. I have successfully testified numerous times as an expert witness in federal court defending the “job relatedness” of objective employment tests.

Beginning my freshman year, I built WDCV from scratch with a soldering gun on the second floor of the music building and subsequently designed the broadcast studio in the HUB, which came online after I graduated.

Without a doubt, my Kappa Sigma adventures and friendships trump the time I spent as business manager of The Dickinsonian and station manager of WDCV.

My annual Kappa Sig alumni newsletter has been an invaluable link to understanding the aspirations and challenges of undergrads over the past five decades as well as the accomplishments of my fellow fraternity brothers.

How did you get interested in industrial psychology, and what about it excites you most?

Steve Coslett who taught pre-med clinical psych courses talked me out of flight school and encouraged me to give grad school a try. Five years later, I had a Ph.D. instead of a set of pilot’s wings—although I subsequently earned my sailplane license. To this day I am excited about applying the scientific method that I began to learn as a chemistry major five decades ago.

What has your career entailed?

My career satisfactions are many. I have consulted with private sector employers and federal agencies, including the Executive Office of the President. With my top secret security clearance, I have consulted with both the Secret Service and the FBI. I was awarded the M. Scott Myers Award for Applied Research in the Workplace by the Society for Industrial/Organizational Psychology for developing the valid, legally defensible employment tests used by TSA to hire 50,000 airport security screeners over six months in 2002.

Defending objective employment tests has necessarily straddled the fault line of racial differences in cognitive ability that result in differences in outcomes across society including education and employment with which I am most familiar. My scientific training in developing and defending evidence-based selection and promotion procedures (equal opportunity) well prepared me for the inductively reasoned (equality of results) advocacy of Washington where I spent my career in and out of government.

I’ve coached sailing at the Naval Academy and competed in eight Bermuda Races, breaking the Annapolis/Bermuda Race record by 15 hours back in 1988. So teaching my granddaughters about tides, rocky shores and fog while sailing on the coast of Maine for the past dozen years has been most rewarding.

About your preservationist work: What was the most challenging project, and what one can you look back on with the most satisfaction?

Charlotte and I have thoroughly enjoyed the care and feeding of historic properties starting with our 1840s home in Old Town Alexandria and now restoring our 1750s home on the eastern shore of the Chesapeake Bay. Probably the most challenging project, one where Maryland Governor Larry Hogan cut the tape, was putting a group of historic preservation buffs together to invest in bringing the 1740s Washington Inn and Tavern to life in Princess Anne, Md.