With an Eye to the Stars 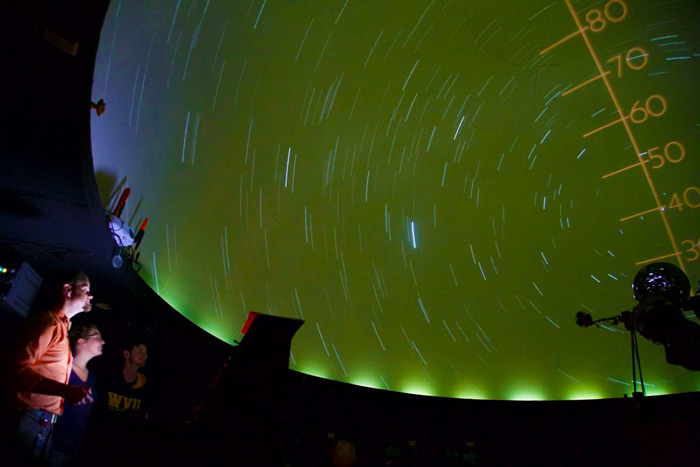 Rob Webb ’05 is inspiring the next generation of STEM learners, with the help of a local planetarium

Rob Webb ’05 is in his 12th year of teaching conceptual physics, STEM (science, technology, engineering, mathematics) and astrophysics at Pequea Valley High School in Lancaster County, Pa. He also runs the Pequea Valley Planetarium, and currently he’s reaching out to supporters to renovate the 49-year-old facility to bring it back to its former glory. Recently Webb got a leg up in the effort when he led his school and the planetarium through the Farmers Insurance Thank America's Teachers Challenge, coming out the other side a winner of a $100,000 grant. Read on to see what else motivates the former physics major.

The liberal-arts approach, to me, means mastering your domain while also allowing yourself to be influenced and inspired by the world around you to give you a broader context for the usefulness of your domain. By learning my physics curriculum through a lens of sustainability and public service, I was able to tailor my lessons to include more relevant questions such as, “How realistic is it to find another planet to live on?,” “Why should we fund NASA?” and “How can we use physics principles to continue living on planet Earth?” to give the students a more global perspective.

I was absolutely dedicated to Alpha Phi Omega. Our brotherhood provided me opportunities to seek purpose outside of my educational pursuits through service projects, social events and leadership training. It also provided me the opportunity to meet my future wife, Danielle Vigilante-Webb ’03. Win-win. In my advising of the Student Council at Pequea Valley, I continually implement the leadership strategies learned through taking on officer roles within Alpha Phi Omega.

My greatest memory is asking the cheerleaders to develop a routine and create a banner for my first Homecoming in October 2005. Why? I wanted to propose to my wife. And I did, along with a cheer and banner from the squad. And she said yes. Other than that, probably all the late nights and early mornings working on projects in Tome with the other physics majors and enjoying the sleep deprivation together, as well as the great Presidents Day snowstorm of 2003.

Being an hour and a half away, my wife and I make sure we come back for every Homecoming and every Alumni Weekend. Every time we visit, we find more inspiration to improve our own communities, workplaces and homes, led by Dickinson’s example of always progressing. We really enjoy reconnecting with old friends and reliving some of those old memories. We also value and truly believe in Dickinson’s philosophies regarding education and give monthly to the Dickinson Fund to keep the dream of a liberal-arts college education alive for all students who are driven to achieve.

How did you get interested in teaching, and what about it excites you most?

I knew I wanted to be a physics teacher since I was in 10th grade. I was fascinated with the idea that, if we know certain initial conditions, we can predict with astonishing accuracy where a cannonball might land, how much fuel a lunar lander needs to get back to earth or where a planet will be in the sky centuries from now. I also enjoy crafting a story or lesson to inspire others to understand something new or do something to affect change. As a science educator, I get to tell stories and inspire others to take action and make decisions based on evidence and potential outcomes.

My work in the planetarium is really the most unforgettable, and most surprising, experience I’ve had. When I accepted the position at Pequea Valley, the planetarium was really just an afterthought and a bonus for teaching astrophysics. Having no experience, but trusting in my liberal-arts education to get me through, I was able to learn from the previous and retired planetarium director how to direct its functions. From there, I fell in love with astronomy and planetariums and their potential for inspiring the next generation of STEM learners. This facility has truly shaped me into the educator I am today.

I can’t pick between Neil DeGrasse Tyson and Carl Sagan. Dr. Tyson has skyrocketed in the past decade in regard to science education and is lighting the science world on fire. On the other hand, Carl Sagan, through simple and well-planned storytelling, relayed the original story of the universe to a generation of learners in the 1980s. His ability to communicate complicated ideas in a fashion that respects the learner is unparalleled, and a skill for which I strive.

November 10-12, 1833. Imagine people around the world looking up at night in wonder and amazement, turning into panic and fear, when countless meteors streak across the sky in numbers never again seen nor previously recorded. We continuously try to observe meteor showers when the news tells us they’re happening, but with light pollution, inflated expectations and somewhat unpredictable showers as issues, we tend to be disappointed. This would be the ultimate meteor shower to witness, with the additional sociological aspect of fear and uncertainty due to lack of astronomy education in the masses.

You’re going to live on an island by yourself for a year: What books, albums, and movies do you take with you?

Books: All the ones I’ve purchased but never had the time to read, including the Principia by Isaac Newton, anything by Stephen Hawking and America by Jon Stewart. Albums would have to include the Into The Wild soundtrack by Eddie Vedder, The Beginning Stages Of… by the Polyphonic Spree for mood regulation and just one live Phish album to pass the time.