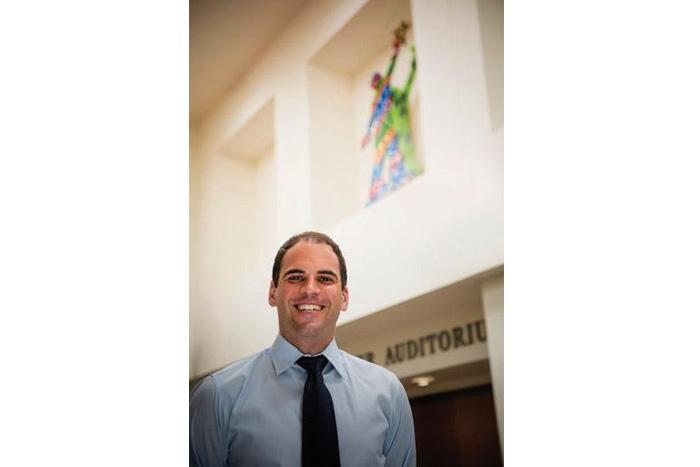 Michael Healey ’01 and his students take their worldview to the U.N. and beyond

It's a good thing Michael Healey '01 decided not to be a lawyer. Instead he is helping high-school students achieve great things and aspire to do even more.

"With the interdisciplinary vision that Dickinson gave me, I realized teaching was the perfect opportunity to take everything and put it into practice," says the political-science major.

After Dickinson, Healey earned an M.Ed. from Marywood University and the University of Scranton and took a position as a world-cultures teacher at East Stroudsburg High School near his hometown of Scranton, Pa.

"I thought I'd teach here for two or three years," Healey admits. "Before I knew it, I was 10 years in. I became such a member of the community, and I wouldn't want to be anywhere else. There's such good energy here."

Healey realized he could really apply his Dickinson education, including his study-abroad experience in Málaga, Spain, to dig deeper into this diverse community.

"East Stroudsburg is the whole world in one high school—50 percent of the students are non-white, hailing from Pakistan, Ghana, Nigeria, the Caribbean Islands," he says.

Healey's wife, Michele Vella, also offered her expertise and international perspective—fluent in Italian and Spanish, she interned for the United Nation's Academic Impact, an initiative that assigns ASPIRE (Action by Students to Promote Innovation and Reform through Education) status to student groups aligned with its 10 principles, which focus on areas like human rights, literacy, sustainability and conflict resolution.

Together, Healey and Vella brought students from his World Cultures class on board to start U.N. ASPIRE South, a social-justice and global-citizenship student group serving as a district chapter of the Academic Impact initiative. Healey plans classroom lessons around subjects like gender inequality, child brides and diamond wars, and the students take these lessons beyond the classroom and into the forefront at the school and in the community.

Community activities include fundraisers for the people of Haiti and T-shirt sales for Japan earthquake victims, as well as lectures and discussions. Healey says he wanted to "bring in people who look like the students, have backgrounds like them and have succeeded in life," so his speakers have included a Fulbright Award winner, a member of the League of Kenya Women Voters, graduate students from Lehigh University and Lafayette College and members of the historically black fraternity Kappa Alpha Psi.

In 2011, the students were invited to make a presentation on the role of young women in a global community at the 56th Commission on the Status of Women at the U.N. Headquarters in New York City. They have been invited back to the U.N. several more times.

But all of this was just the beginning. On the bus heading to the city for one of these appearances, Healey passed out copies of a book to members of the group to read along the way. The book was Half the Sky: Turning Oppression into Opportunity for Women Worldwide by New York Times columnist Nicholas Kristof and wife Sheryl WuDunn, a former Times correspondent. The book traces the authors' odyssey through Africa and Asia and exposes the unjust treatment and deplorable living conditions of the women and young girls they encountered.

"The next day I started getting urgent e-mails from the students saying we needed to do something," Healey recalls. "They were so moved to action by this book, as I was. It was an eye-opening experience."

And it spread. More students from outside the group asked him for copies of the book, and he placed several orders from Amazon.com to keep up with the demand.

"Anyone who thinks public education doesn't succeed should see the energy that was injected into this school," Healey says.

The students put that energy to use, holding a community roundtable to raise awareness and a fundraiser for the women and communities featured in the book. Healey, sensing something special, took pictures and e-mailed the Times and the book publisher. To his amazement, he received a response. Show of Force Productions was working on a PBS documentary based on Half the Sky, and on Jan. 13, WuDunn pulled up in front of East Stroudsburg High School to interview Healey and six of his students.

"It was a fantastic experience," says Healey, who received an Excellence in Education Award in May for his work. "They filmed for eight hours. The students talked about the impact the book had on them and how they could see themselves in the women featured."

And when the documentary, narrated by George Clooney, airs Oct. 1 and 2, their names will be listed in the credits alongside the likes of Hillary Clinton, Desmond Tutu and Melinda Gates.

"Now we need to keep setting the bar higher," Healey says. "I challenged the students over the summer to think about their community and how they can change lives on a global scale." They also spent time volunteering at the Lehigh Valley Hospital Food Bank in July and August.

"When you take students to the U.N., and when you give them a chance to meet a Pulitzer Prize winner, they're never going back," Healey says. "You've expanded their minds so far beyond where they were, and then they turn around and affect their families and friends. That's a wonderful thing."