Julie Falatko Did Not Ask to Be in This Article 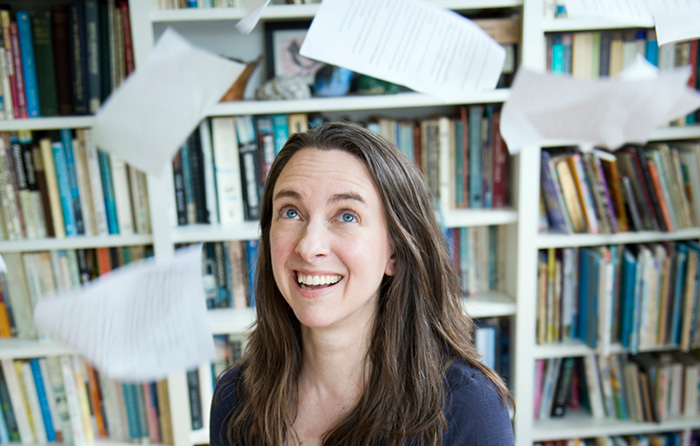 Author Julie Siegel Falatko '93 did not ask to be in this article, and Snappsy, the title character in her debut picture book, did not ask to be a literary star. And yet here they are, soaking in the accolades for Falatko’s breakout child-lit hit, published by Viking Press.

Dubbed “utterly irresistible” (Bookpage), “excellent” (Publishers Weekly), and “a truly laugh-out-loud, mischievous romp” (Booklist), Snappsy the Alligator (Did Not Ask to Be in This Book) tells the tale of an alligator who wants to live a quiet life, and of the book’s narrator, who loves dancing and parties. It’s a goofy delight, but don’t let that fool you—there are years of hard work and experience behind that title.

An English major at Dickinson who penned her first story at age 8, Falatko was involved with the Zatae Longsdorff Center (now Feminist Collective) and Mermaid Players and lived in the Arts House for two years (“Most of my great memories happened in those rooms, talking for hours with people who understood me, having Halloween parties and gathering every week to watch Twin Peaks.”). She began her career as a technical writer/copywriter and then switched gears to library science, earning a master’s degree in that field from Southern Connecticut University in 2010.

It was an intense experience, since Falatko—by then married to husband Dave, and with four children (Henry, 13; Eli, 10; Zuzu, 8; and Ramona, 6)—was studying the same books in grad school that she was reading to her kids at home.

“I’d always wanted to write children’s books, and I was knee-deep in children’s literature,” says Falatko, who maintains a neighborhood book-exchange repository outside of her home and has published articles on how to raise young readers and writers. “Being so immersed in them, I realized that I had to pursue my dream.”

She had plenty of book ideas. Finding the perfect one? That was the trick.

Falatko signed up for several online writing challenges and analyzed the industry, contributing to podcasts about the children’s book market and writing reviews.

Two years, and many daily writing and brainstorming sessions later, she says, the idea for Snappsy arrived “in one big whomp.” An agent followed, and Falatko’s debut, illustrated by Tim Miller, was released Feb. 2.

In it, Falatko crafts a story-within-a-story: As Snappsy goes about his daily activities, the book’s narrator delivers a melodramatic commentary and intentionally misinterprets the alligator’s every move. It’s all very meta, giving young readers a view of how stories and legends are made, “with exploration-worthy detail” (Bulletin of the Center for Children's Books) and satisfying “bite” (Kirkus Reviews). It’s also cleverly done, notes The New York Times, renewing a jaded reader’s “faith in the possibilities of fourth-wall breaking.”

As the starred reviews rolled in, so too did Falatko’s public appearances at schools, libraries and bookstores (including a February launch in New York City, where she reconnected with Dickinson friends Fred Wendte '92, Jenifer Horst '91, Emily Wylie '94 and Anne Flounders ’91). Falatko signed a contract to write four more picture books, including a sequel to Snappsy, set for a 2017 release.

Her goal: to create more honest, smart and engaging works that “manage to speak to that liminal space children inhabit, where the world is still magical.” To get there, she has a writing routine.

Falatko writes from 5 to 6 a.m. (“This is not an amazing achievement—I just happen to be a morning person”), then goes for a morning run or bike ride to clear her head and problem-solve. After the kids go to school, she writes until noon and then spends the afternoon on marketing and publicity tasks.

First drafts remain tough (“There are times when I want to stop and say, ‘Still? I still don’t know how to do this?’ ”), but it’s helpful to have four “brutally honest” kid critics at the ready. And she enjoys revising and brainstorming—her favorite aspect of the process, by far.

“When I come up with something completely outlandish—a talking couch, sentient glitter, a disenchanted rooster—I’m allowed to write that up,” Falatko reports with wonder and glee. “Sometimes I spend an afternoon brainstorming title ideas for a story about an elephant on vacation, and I’m amazed that this is part of my job description.” 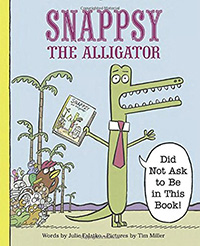 Rather than answering our standard alumni Q&A questions herself, Falatko turned them over to the star of her book, Snappsy, modifying them slightly to fit this new subject, of course.

What’s it like to be the star of a successful children’s book?

I’m told that fame is wonderful, and that it will get me good tables at restaurants. But mostly it’s annoying. I don’t want to go to restaurants. I just want to eat my sandwich at home in peace.

What books, albums and movies would you take to a desert island?

I'd rewatch Stranger Than Fiction and read books about how to meditate so hard that you can completely block out annoying people in your life. As for music, polka all the way.

Would you like to be a children’s book author?

Yes, actually. I think it would be nice to be in control of the story for once.

If you had a time machine, where would you go?

I think it says a lot about my life right now that my first thought is how I’d have to hide the fact that I just built a time machine, in case Julie Falatko thought that sounded like a good book idea.