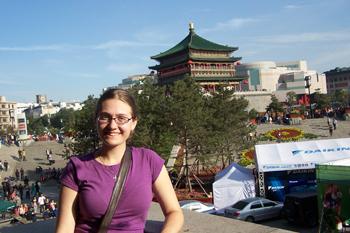 “From the very beginning, my focus has been to gain a global perspective,” says Weatherby, pictured near the Drum Tower in Xi’an, China.

Senior Courtney Weatherby of Hampstead, N.H., an East-Asian-studies major, recently was awarded a Critical Language Scholarship (CLS) for excellence in speaking the Mandarin language and her commitment to studying Asian language and culture.

“I discovered the CLS program a few years ago when I was looking for scholarships for my semester abroad at Peking University in Beijing,” Weatherby explains. “It sounded like a great program, so I bookmarked it for a later date and was finally able to pursue the opportunity this year.”

The CLS program provides a fully funded, group-based, intensive Chinese-language instruction and cultural-enrichment experience. CLS is part of a U.S.-government effort to dramatically expand the number of Americans studying and mastering critical-need foreign languages, which include Chinese, Japanese and Russian.

Each application is reviewed by two language or area experts. Approximately one-third of the applicants are then selected for review by a national selection panel in Washington, D.C., and participants are recommended for approval by the U.S. Department of State. Students are chosen based on levels of commitment and intent to continue language study after the program, in addition to previous academic coursework and language study.

Weatherby will spend two months this summer in Xi’an, China, as part of the CLS program before pursuing her master’s in Asian studies at Georgetown University. She plans to focus on Chinese foreign policy and contemporary politics with an additional regional concentration in Southeast Asia.

Weatherby credits her success to her Dickinson study-abroad experience and says while many schools now offer the chance to study Chinese, Dickinson also afforded her great opportunities to apply her language skills in a foreign country.

“While my first two years at Dickinson provided an important base, I think my semester in Beijing really helped me decide to pursue Asian studies at the graduate level. It also gave me an edge when applying for the CLS,” she says.