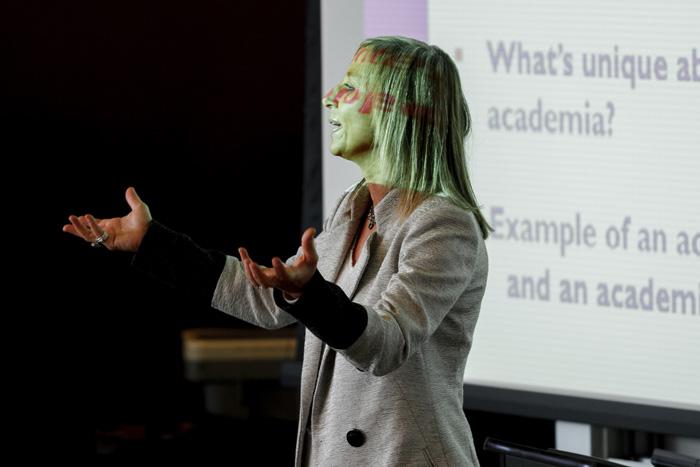 Barbara Slusher ’86, P’16, meets with students to discuss her career in the world of drug discovery

Barbara Slusher ’86, P’16, is the director of the NeuroTranslational Drug Discovery Program at the Johns Hopkins School of Medicine’s Brain Science Institute and a professor of neurology, medicine, psychiatry and neuroscience at Hopkins’ School of Medicine. She was recently back on campus to deliver a Rush Hour talk titled “Drug Discovery Goes Back to School,” and there were valuable lessons for anyone interested in a life dedicated to new therapeutic development.

Now, if you don’t happen to work at a brain science institute or in a lab navigating the endlessly forking paths of drug discovery, you might think that this particular Rush Hour would find you buried in a blizzard of esoteric jargon detailing complex processes and experiments that only a chemistry major raised on a steady diet of bioinformatics and pharmacology would understand.

But what the audience got instead was an engaging look at the former chemistry major's road from Dickinson to Hopkins and a thorough—and thoroughly digestible—look into the drug-development process.

“I was asked to talk a little bit about my career,” Slusher began, with the casual, approachable tone that would become the trademark of her hour in Rector. “And not so much that you guys really care about my career, but it might be of interest to you as you’re thinking about your career choices, whether it be in academia, biotech or the pharmaceutical industry.”

And, yes, her career path looks like it was pulled from a textbook on how to work in the drug-development industry: After Dickinson, Slusher got her Ph.D. in pharmacology and molecular science at the Johns Hopkins School of Medicine, while at the same time getting an MBA in management at Hopkins’ Carey School of Business. Then it was onto a joint postdoctoral fellowship with the University of Pennsylvania and ICI Pharma. ICI became Zeneca (and later AstraZeneca), and Slusher took on her first postgraduation job with Zeneca, directing a biochemistry research lab.

“What was really cool is that I got to work on three drug-development projects at Zeneca, and two of them resulted in blockbuster drugs,” she says, citing Seroquel (a schizophrenia drug with around $4 billion in sales) and Diprivan (aka propofol, which accounts for about 30 percent of the global general anesthesia drug market).

After almost 20 years working in various executive positions in the pharmaceutical industry, Slusher returned to Hopkins in 2010, where she remains today, leading the Johns Hopkins Drug Discovery team, which is responsible for translating laboratory discoveries at the university into small molecule therapeutics. She is the author of more than 175 scientific articles, the inventor on 75 issued patents and applications, the founder of a new biotechnology company and the leader of the international consortium of over 130 university-led drug discovery centers.

These experiences have made Slusher uniquely positioned to understand the complexity, expense and time frame of the drug-development process (e.g., more than 98 percent of drugs fail before reaching the market, the average cost to get a drug to market is $1 to $2 billion and it takes between 15-20 years to do so, on average). But understanding those obstacles only make success more fulfilling.

“When you launch a new drug onto the market, it’s a huge party,” she said. "It represents the culmination of years of dedicated discovery and development efforts. So what really motivates me is the idea that I can be smart enough or lucky enough or creative enough to discover a drug that might ultimately help patients.”

“The education I received at Dickinson provided a solid launching pad for my drug-discovery career, and I feel so fortunate that I chose a career that I am passionate about," Shusher said. "I love what I do, and I cannot imagine doing anything else. Sometimes I can't believe that they actually pay me to do this job."

Slusher has always been looking for promising opportunities outside the lab as well.

“I was a science major at Dickinson, but I’ve also always been interested in sociology and social work and the rich/poor divide as well,” she said, noting that she was a sociology minor. “At Dickinson I was not only able to pursue both interests but I was really encouraged to take on leadership roles in both areas, and throughout my life I continue to do that.”

Beyond playing lacrosse, and serving as a captain for four years, Slusher also played soccer, was in the Delta Nu sorority and was involved in many social-services activities, including an adopt-a-grandmother program with a local convalescent center, Big Brothers Big Sisters and a summer enrichment program for underprivileged kids.

“My take-home message to you guys is that Dickinson is a pretty diverse place,” said Slusher, whose son Ethan ’16 is a biology and biochemistry & molecular biology double major, “so don’t just get consumed with classroom learning and good grades. Do that, but in addition to doing that, it’s really important that you get involved as much as possible—it’s going to make you a much more interesting and ultimately successful person.”