In the Game: Shifting into the Sweet Spot 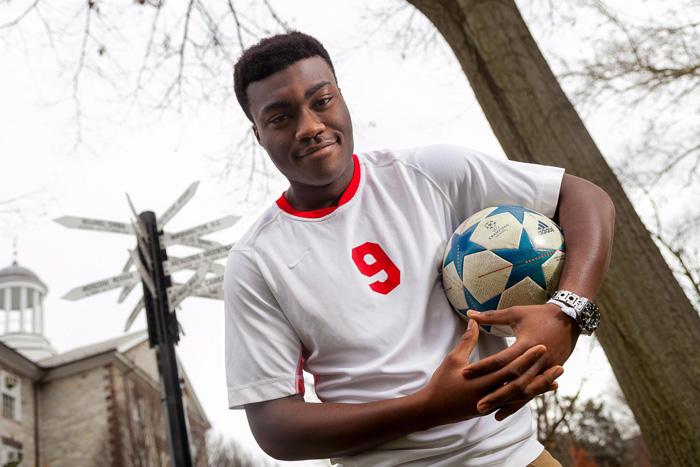 Soccer (or European football) is a fitting sport for global citizen Alfred Hylton-Dei ’16. The family is originally from Ghana, and his father’s job with the United Nations led them to Switzerland and Italy as well. When Hylton-Dei transferred to Mercersburg Academy in Pennsylvania, he set his sights on Division III college soccer.

“Playing soccer was a priority, but so was academics,” he says. “I was really attracted to Dickinson for the international aspect, the diversity, the globalization.”

A strong forward with a penchant for goal scoring—he was team MVP as a senior at Mercersburg—Hylton-Dei tried out for the team as a walk-on, committing to Dickinson without knowing for sure he had a spot.

Hylton-Dei made the team, and he also made an immediate impact. Shortly after one of his first appearances on the field, he was named a Centennial Conference (CC) Player of the Week. When a teammate was injured, Hylton-Dei stepped into the unfamiliar position of left midfielder.

“I think it helped that I was able to bring a different mindset to soccer because of my background, and it was  the same thing in the classroom,” says the international studies and French double major. “When we would talk about experiences, it’s interesting to know the perspective of the next person and learn from them the way they learn from you.”

His junior year, he shifted back to his sweet spot at forward, and the team went six games undefeated in the CC, setting a school record. But after the team graduated several key players in 2015, this season was a difficult start.

“Our team was pretty young,” recalls Hylton-Dei, one of only two seniors on the squad. “It was important to encourage the younger players and have them become significant contributors by the end of the season. It took a lot out of me in the beginning, but by the end we were a formidable team.”

The Red Devils finished strong, advancing to the second round of the NCAA tournament but losing 2-1 to Lycoming College in the final minutes. They ranked in the top 25 of the NCAA and second in the CC.

“It’s bittersweet,” Hylton-Dei admits. “But I’m proud of the achievements we made, proud to be part of Dickinson soccer.”

He also recalls feeling “fortunate and grateful” for the experience of playing on the new Phyllis Joan Miller Memorial Field, which was completed in 2013.

“It propelled us to play our attractive brand of soccer—‘jogar bonito,’ which means ‘play beautifully’ in Portuguese,” Hylton-Dei says. “Most of my memories were forged on that field.

“I hope I’m leaving behind a legacy that the other guys can follow and build their own legacies,” Hylton-Dei continues. “And that’s what I realized when the ref blew the final whistle—I had a good career and a good season, and I couldn’t have asked for better teammates.”