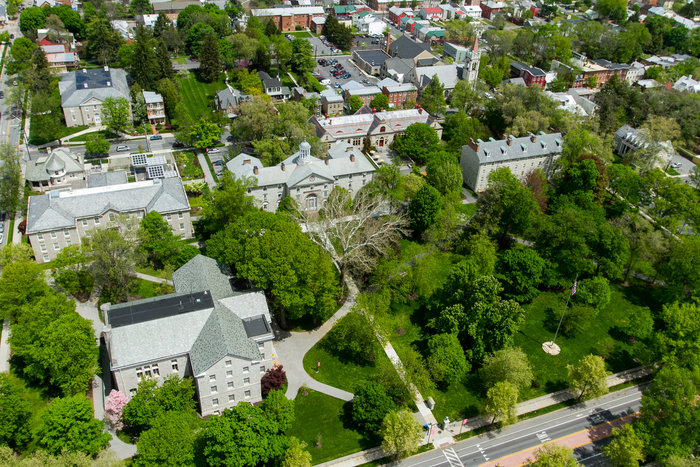 May I congratulate you on your [fall 2015] article featuring the Bologna program’s 50th anniversary! Both
the commentary of fellow alumni and the photographs (especially of Professor of Political Science Mark Ruhl ’70, my program director) warmed my heart and brought alive memories of that incomparable experience and the value of Dickinson’s global studies program.

Without doubt, my Bologna experience changed the focus of my life. My love of the Italian language and culture was sparked that incredible year, and I went on to study both on the graduate level, first working in translation for Italy’s ENI-New York (my first boss was Bolognese!!) and later teaching at all levels.

Today, it is also my joy and privilege to prepare adult learners for travel to Italy (especially Bologna!) and to share many aspects of Italian life and culture with those of Italian heritage, as well as with many simply in love with all things Italian. Truly, not a day goes by when I do not draw upon my own experiences of “la dolce vita” in a way that continues to enrich both my teaching and my life.

Thank you, Dickinson Magazine, for so beautifully capturing the essence of that momentous year for so many of us! I look forward to more of your special features in the future and …Viva Bologna!

I was disappointed in “Not for Shale” in the fall issue of Dickinson Magazine. The article documented an interview with Mark Ruffalo, winner of the Sam Rose ’58 and Julie Walters Prize for Global Environmental Activism. I was surprised that Dickinson selected this individual to receive the substantial monetary prize of $100,000, and that the college publically recognized him in several forums as being a reputable activist who Dickinson students should admire. In the published interview with Ruffalo, his knowledge of environment and energy has several errors. Having worked in, and close to, the energy industry, I am familiar with the topics Ruffalo addresses. His supposed facts are easily challenged and inaccurate, at best.

Ruffalo says that hydraulic fracturing uses “enormous amounts of fresh water … up to 13 million gallons of fresh water” per well. A quick fact-check with the U.S. Geological Survey (USGS) would show that the median amount per well is 5.2 million gallons—not even half the amount stated. Moreover, it is not always fresh, potable water. The industry commonly uses nonpotable brackish water; in regions where water is scarce, the industry is turning toward recycling recovered frack water for uses such as irrigation.

A 2015 Duke University study found “that the water used in fracking makes up less than 1 percent of total industrial water use nationwide.” Did anyone ask Mr. Ruffalo if he knew what the other industrial uses are of the other 99 percent? A 2005 USGS study of total freshwater withdrawals in the U.S. shows that the thermoelectric industry uses 143 billion gallons per day. Although the Duke study was from 2015 and the USGS study was from 2005, fracking still would not significantly change the chart published by the USGS, which can be found at dson.co/water-use.

Another misleading statement Mr. Ruffalo offers is “what we’ve seen throughout history is that fossil fuels rise at about 12 percent above inflation.” Charts can be obtained at the Energy Information Administration (EIA) for a variety of historical periods. For example, oil prices were relatively flat 2011-14. In May 2014 the average price was $100/barrel, and in May 2015 the average price was $60/barrel, a 40-percent reduction. Currently (November-December 2015) the average spot price is less than $50/barrel, a 50-percent reduction since December 2014. A chart of spot oil prices (non-adjusted by inflation) since the large-scale development of unconventional resources from January 2009 through December 2015 can be found at dson.co/Crude-oil-2015.

Last, Ruffalo cites the energy industry as heavily subsidized by taxpayers. In 2012, the Pew Charitable Trusts’ report on U.S. energy subsidies listed the top 21 companies receiving federal grants and allocated tax credits since 2000. This study can be found at dson.co/gov-subsidies.

According to the report, electrical energy, not fossil-fuel production, reaps the most in tax subsidies. At the top of the list is Iberdrola—a company that provides renewable and thermal-electricity generation, electricity transmission and distribution and natural gas storage. Going down the list, one finds electricity and utility companies, not oil and gas producing companies, as Ruffalo implies. These are the exact “green energy” companies Ruffalo wishes to subsidize.

While everyone wants clean water and clean air, is it not the job of Dickinson to review the actual merits of the winner of the Rose-Walters prize? If this prize is meant to make Dickinson attractive to students interested in the study of the earth, environment and sustainable living, the college gets a failing grade with this prize winner. Can Dickinson not distinguish itself among the sea of other liberal arts institutions on its academic excellence, without the help of a celebrity?

As Dickinsonians, we regret the damage done to the reputation of the college by giving a platform to the actor/activist Mark Ruffalo for his fear-mongering against American energy.

Alumni wonder why the college would bother building new science facilities while also hosting the champion of a smear campaign that contradicts the geology, chemistry and physics that govern extraction methods in the Marcellus Shale.

A great and enduring institution like Dickinson should be above the juvenile temptations of celebrity worship. If Dickinson had intended to bring Mr. Ruffalo to campus to share his talents and experience with students, it would have been better done with the Mermaid Players.