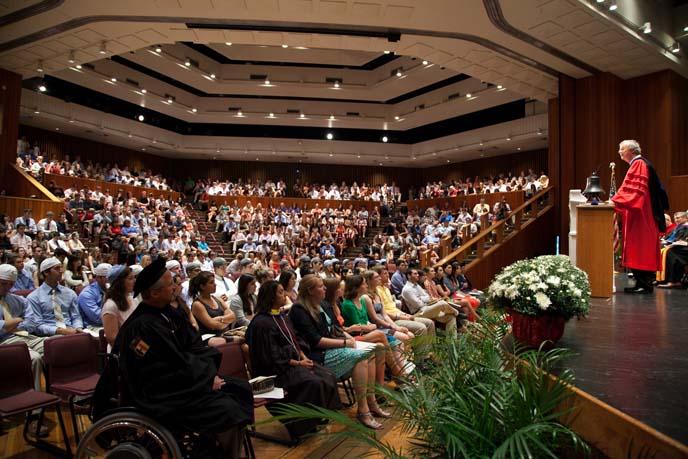 Rainy weather couldn't quell the excitement buzzing about campus during the Aug. 26 Convocation, but it did significantly alter plans. Traditionally held outdoors on the steps of Old West, the ceremony was moved inside the Anita Tuvin Schlechter Auditorium, and the newest members of the college community were welcomed into the fold against an aural backdrop of occasional thunder and staccato bursts of rain.

"It's a little disappointing that it can't be held outside, since that's the tradition here," admitted Audrey Owens '16 of New York. "But watching the faculty process in—and sitting here with everyone else in my class, together for the first time—is exciting. And you can still get a sense of the togetherness and the tradition."

Because of the uncooperative weather, the Convocation ceremony has been divided in half: On Aug. 26, administrators and faculty members welcomed the new Dickinsonians, offered advice and acknowledged past successes in a series of addresses. The college will complete the 2012 Convocation outdoors on Tuesday at noon, when students will walk up the steps of Old West and sign the college register.

Tuesday also will usher in a new tradition: the bestowing of limestone fragments—mined from the same quarry that supplied building materials for Old West and other campus landmarks—to students about to embark on their undergraduate careers.

President William G. Durden '71 explained the history of the limestone fragments in his Convocation address. "An American undergraduate education is first and foremost about identity formation," he said, stressing that the students will undergo tremendous intellectual, social and personal growth during their undergraduate years.

Durden encouraged the students to refer to their sedimentary mementoes of Convocation throughout their time on campus, taking the opportunity to periodically reflect on what they have learned and who they are becoming. Then, in four years, they will have a choice: keep the limestone as a lifetime reminder of the importance of continued growth and thoughtful examination, or give it back to the college so it may be given to a new generation of students.

Ringing in the new year

The president concluded the afternoon event by ringing a ceremonial bell—an exact replica of the liberty bell, cast in the same foundry as the original—to signal the start of the 2012-13 academic year.  The symbolism hit home for Alexandra Farrand '16 of Michigan. "What this ceremony tells me is that high school is officially over and college has officially begun, and that's exciting," she said. "Everything is so new—the classes, the clubs, the people—and you just want to jump right in."

Adam Laird '14 of New Jersey, a transfer student from Clemson University who began classes at Dickinson last semester, was likewise pleased to get the ball rolling. "The Convocation ceremony sets the scene for, and kicks off, the whole student experience," he explained. "There's something special about Dickinson; you know it's a school on the move, and it's good to be a part of that."