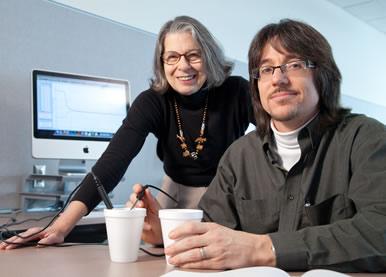 Understanding how eyeglasses improve vision and why fog forms in the bathroom after a shower—it’s all physics. Dickinson professors say the key to comprehending these sometimes complex concepts, especially for non-science majors, requires tossing aside rote learning and so-called cookbook labs and replacing them with more effective student-driven inquiry.

That’s just what physics professors Priscilla Laws and David Jackson set out to do when they developed Explorations in Physics (EiP), an introductory college-physics curriculum designed to increase science literacy and an understanding of scientific investigation.

First developed more than 10 years ago, EiP combines text with inquiry-based activities and devotes a full one-third of the semester to student-led experimental projects.

“Students who have direct experience with the process of scientific investigation are better equipped to help solve contemporary social and environmental problems,” says Laws, research professor of physics.

Laws’ and Jackson’s work, in collaboration with Rochester Institute of Technology professor Scott Franklin, is being used by college and high-school physics educators across the country. It also recently caught the attention of Science magazine, which awarded EiP its inaugural Science Prize for Inquiry-Based Instruction. EiP is the first of 15 inquiry-based learning modules to receive the new prize. The winning modules were selected by a jury of more than 70 scientists and science teachers.

“Our goal is to make it much easier for teachers everywhere to provide their students with laboratory experiences that mirror the open-ended explorations of scientists, instead of the traditional labs where students follow instructions to a predetermined result,” says Science magazine editor-in-chief Bruce Alberts.

Laws and Jackson developed EiP in part to correct what the science community calls an unsatisfactory statistic—only 28 percent of the U.S. population is considered scientifically literate—attributed in part to curriculum shortfalls in early science education and a lack of student engagement in the sciences.

“The world badly needs a revolution in science education—a revolution that must begin at the college level,” wrote Alberts in a January 2011 editorial announcing the new inquiry-based prize as a catalyst for outstanding introductory college sciences courses.

Jackson believes EiP is part of the revolution.

“When I first started working on EiP, I thought of it as a revolution because there was nothing like it, and it was a lot of fun to teach,” says Jackson, who also is editor of the American Journal of Physics. “I could see the students were having a lot of fun. It’s my hope that this kind of a course could act as a model in any of the sciences. I really believe strongly in good science education for non-science majors. Now, the best thing that could happen would be to excite a lot more people about using inquiry-based learning.”

Read more about Explorations in Physics and watch a video interview with David Jackson.