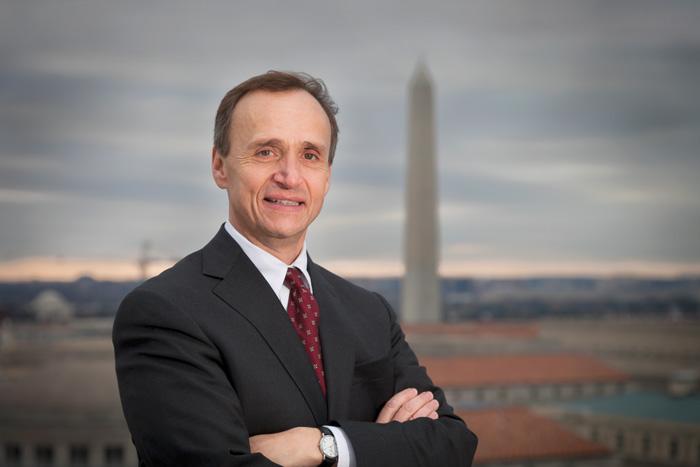 It happened after DiBiagio conducted a routine audit of a $50-billion European client of Baker-Botts, the international law firm in which DiBiagio is a partner. The long-and-short of it is that DiBiagio discovered money—$10 million—on the company’s books that shouldn’t have been there, so he worked with the client to create an ad hoc trust that would distribute the funds to charitable organizations.

DiBiagio’s previous life as U.S. attorney for the District of Maryland, a post to which he was appointed by President George W. Bush, didn’t provide the perfect segue into this endeavor. But it turns out that Dickinson did.

It began with a notice in the spring 2014 issue of Dickinson Magazine that Anne Dowlin Paul ’82 had died, DiBiagio recalls, adding that he was close with both Anne and her husband, Chris ’80, while at Dickinson. For a moment, he seems to forget about the $10 million, about his task, about everything, and he’s right there with the people he connected with decades ago. “One of the things that you know from your experience at  Dickinson is that you meet the most remarkable people ever,” he says. “All the places I’ve been, I can tell you that the fondest memories I have are for the people I knew when I was there. They were absolutely remarkable people.”

DiBiagio sent Paul a sympathy note, and Paul gave DiBiagio a call. While they talked, catching up, DiBiagio says something just clicked.

“I said, ‘By the way, I’m under this incredible pressure to essentially give away $500,000 per month,’ ” he recounts, explaining that he had to parcel the total sum into smaller chunks. “I asked if there were any organizations that he was close to that maybe we could give a gift to.” Paul sent him a list, and before long DiBiagio and his team were flying to Oklahoma to meet with Paul.

“Tom is one of those folks who, I don’t see him for 25 years, and we sit down and we pick up right where we left off,” says Paul, who credits the relationship they built in their fraternity at Dickinson with creating an inherent level of trust that the years couldn’t diminish.

After running due diligence, DiBiagio was able to make six-figure gifts to groups the Pauls held dear: one to Emergency Infant Services, a Tulsa-area organization that helps families who need short-term, immediate assistance, and another to the Eastern Oklahoma Chapter of the Arthritis Foundation. Then DiBiagio started to think that the inherent level of trust Paul felt might lead him to other good causes.

So DiBiagio contacted Jim Paterno ’85, another fraternity brother who now lives in the Philadelphia area. It didn’t take Paterno long to suggest two organizations that meant a lot to him and his wife, Elizabeth ’86: Students Run Philly Style, a marathon-based mentoring program, and Project HOME, a broad-based program combating homelessness, each of which received six-figure gifts. For Paterno, with whom DiBiagio had kept in touch over the years, the whole thing made a lot of sense right out of the gate, chiefly because of their Dickinson bond.

“There’s a pretty substantial group of Dickinsonians who have leadership positions and care about the  community in which they live,” Paterno says. “You know you can count on them to be committed to what they’re doing and be thoughtful and engaged.”

DiBiagio continued the streak with a large grant to help fund tuition assistance and academic programs at Brooklyn’s St. Joseph’s High School, where Loretta Lundberg ’82 is on the board of directors. Lundberg is in a photograph that DiBiagio still displays on a shelf at home—it shows the group he went to Bologna with while at Dickinson—and she was another person he knew would be ready to get involved.

Overall, through his Dickinson network and beyond, DiBiagio helped 52 organizations, among them veterans’ groups, food banks, hospitals and advocates fighting domestic violence. They are causes as meaningful as DiBiagio’s charitable mission, and the relationships that made it a success, came to be for him.