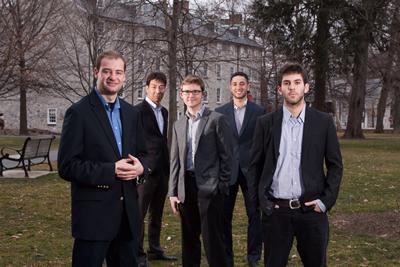 Fifteen years ago, Gilbert was diagnosed at age 5 with an extremely rare form of cancer called pancreatoblastoma. At the time, only four children in recorded medical history had had this disease—none had survived.

That Gilbert would become a medical anomaly was hardly imaginable when doctors first identified the malignant tumor engulfing his pancreas. By the end of his surgery, doctors had removed his gallbladder, half of his stomach and 80 percent of his pancreas. Miraculously, he survived.

One factor may have been a surprise visit he received during his stay at the hospital before his surgery. “At the peak of his career, Cal Ripken Jr. [of the Baltimore Orioles] visited Grayson and offered him motivation and support,” Bass recalls.

Although Gilbert continues to receive medical care for his condition, “Grayson knows the power of inspiration,” says Bass. “And he is alive. Ripken really made a big difference in Grayson’s life, and we both wanted to show others such impact.”

Yet a healthy dose of optimism isn’t the only thing they’re prescribing. In January, Bass and Gilbert launched Inspirational Medicine Foundation, a nonprofit organization that aims to connect critically ill children with their heroes.

Through modes such as Skype on platforms like the iPad, Bass and Gilbert want to help these children forget they’re in hospital beds for the few moments they’re talking to their heroes. “We aren’t guaranteeing recovery, but this will help lift a child’s spirits and can change their outlook,” says Bass. “This can console families too.”

With Gilbert as spokesperson, Inspirational Medicine has rapidly expanded to include an executive board headed by Dickinson seniors Stephan Cha, Ben Weissman, Will Perry and Adam Itkoff.

Bass, as CEO, is researching best practices for nonprofit organizations like theirs. “I’ve always been interested in entrepreneurship, and this is a great way to use all of our skills, be creative and bring people together,” says the biology major.

“The first big step is getting certified by the IRS as a nonprofit organization,” explains Weissman, a biology and anthropology double major and the foundation’s director of programming. “We’re interested in replicating Grayson’s miracle experience and, right now, raising awareness and establishing our donor base is our aim. We’re at the stage where things are happening fast, and one week really makes a difference.”

“It’s definitely one task at a time,” says Perry, an American-studies major and director of marketing and creative consulting. “We want to develop into a youthful and appealing nonprofit that is tech savvy and a part of the Internet generation.”

To that end, Itkoff, a Middle East-studies major and the organization’s creative director, is crafting the foundation’s Wikipedia page. “My first encounter with Grayson is still so vivid in my mind, and that experience makes me more excited about getting our events started,” he says of the group’s potential. “We are a diverse team and we have yet to strike any ideas down. We listen to all ideas and grow.”

With graduation a few months away the group already has plans for how work will be divided beyond the limestone walls and has begun contacting Baltimore sports teams.

“This organization’s potential for global expansion is huge because it’s mostly Internet-based, and we can show companies new ways to give back,” says Cha, an international business & management and economics double major.

Hailing from Seoul, Korea, Cha is appropriately the foundation’s global-outreach liaison. “I remember President Durden mentioning how important it is for us to be useful by using our education to do something that will actually change something,” he says. “This is that, and this is us putting core values in direct engagement with the world.”