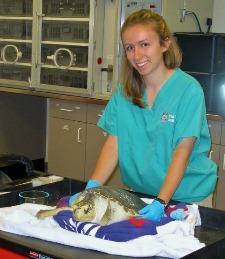 "I have had an interest in animals for as long as I can remember," Elizabeth Austin '14 begins. "It's an interest that I cannot separate from my life." When you hear about what she's been doing, it becomes apparent that Austin has no interest in separating that interest from any part of her life.

"As a young child, I felt compelled to save all the baby birds that fell out of the nest in the backyard," she says. "I was fascinated with the tiny screech owl that lived in the apple tree just outside my bedroom window. This interest never left and only grew and matured as I began to volunteer and become more involved."

Her involvement began, perhaps officially, after her freshman year of high school, when she attended "Adventures in Veterinary Medicine," a summer program at Tufts University Cummings School of Veterinary Medicine. This was Austin's first introduction to the depth and breadth of the profession through lectures, hands-on activities and shadowing experiences, where she followed a veterinary student in the school's ER and ICU.

"It was not a romanticized experience," she says. "Many of the animals were in poor health, and some could not be saved—but the fact that I was exposed to 'real' medicine was exciting and motivating."

Cut to the following year, and her journey continues as a volunteer at the New England Wildlife Center, which serves as a nonprofit wildlife hospital, exotic pet practice and environmental education center. After performing small jobs and giving educational tours, Austin found that she was earning greater responsibility, assisting during assessments, treatments and even during surgery.

"It was at first slightly overwhelming, but it was also fascinating and exciting," she recalls. "I loved the unpredictability of not knowing what animal would come in and what would be ailing it. I also enjoyed the interdisciplinary aspect: I learned very quickly that medicine could not be separated from public education and environmental science."

Austin, a biology major with a pre-veterinary focus, says she saw an interdisciplinary approach in Dickinson as well, and it drew her attention as high school came to an end. "It would allow me to pursue biology and pre-veterinary aspirations while still engaging in history, anthropology and dance classes," she says. "And Dickinson had an equestrian team—which was always an interest of mine but one I had never had the opportunity to pursue."

That opportunity, however, would soon be pursuable, when she sat down to talk with the equestrian team coach, Lindsay Vulich.

"[Vulich] was extraordinarily welcoming and reassuring," Austin says. "And she mentioned that beginners in past years had been very successful." So when Austin arrived on campus to begin her first year, she joined the equestrian team and soon experienced some of that beginner's success, qualifying and going to Zones—a competition one notch up from Regionals and the preliminary for Nationals—where she placed seventh in her class (the Walk-Trot).

"To me the equestrian team is far more than an academic additive," Austin says. "The phenomenal people who make up the team and the coaches are what keep me involved and enjoying every moment."

Austin says her equestrian activities, a natural fit in her overarching narrative, have further developed her pre-veterinary equine experiences in animal husbandry as well. Which brings us back to her career path, from which she has not strayed very far for very long.

"My most recent internship on the New England Aquarium's Marine Mammal & Sea Turtle Rescue and Rehabilitation Team has been hugely significant," Austin says. "It was exciting to participate in the fieldwork responding to seal pups and dolphins and porpoises. The second part of the internship—rehabilitating and releasing critically endangered sea turtles—was incredibly rewarding. We helped have an impact on the environment and contributed to saving a species."

Add to these experiences her study-abroad time in London doing research in the archives of the Royal Society, participating in the Alternative Spring Break trip to the Tohono O'odham Native American Reservation and participating in a LeaderShape retreat and the Lead Now Initiative Webinar Series, and it's apparent that Austin has been very busy engaging and affecting the world around her.

"Here I have the ability to study abroad as a science student, at a school with a strong global focus and on an environmentally conscious campus," Austin says. "Dickinson stays away from the academic tunnel vision than many science programs insist upon."

And while she has a strong focus, seeing life through tunnel vision clearly isn't Austin's intent.

See how Austin is one of many Dickinson students contributing to the college's momentum.