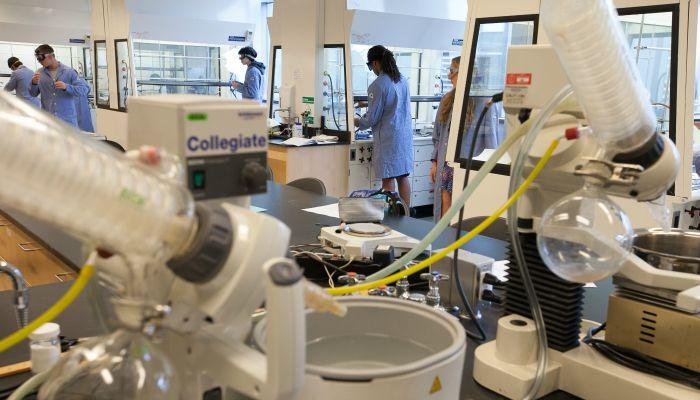 Students in organic chemistry at work during lab hours in the Rector Science Complex. Photo by Carl Socolow '77.

Dickinson has received more than $75,000 in rebates for its energy-saving improvements

As a national leader in sustainability education, Dickinson practices across its campus what it teaches in the classroom. From solar panels to LED lights, rain gardens to recycling, energy-curtailment programs to LEED Gold buildings and sustainable transportation to organic farming, the college’s commitment to green operations is always on full display.

Now, thanks to statewide incentives to lower power usage, the college’s sustainable energy-management investments are really paying off. Since the start of the year, Dickinson has received more than $75,000 in Act 129 rebates for its Climate Action Plan projects.

Dickinson’s Climate Action Plan details how the college will achieve its ambitious target of being carbon neutral by the year 2020. The plan includes projects designed to reduce the college’s emissions of greenhouse gases, the largest of which come from the purchases of electricity.

Ken Shultes, associate vice president for sustainability and facilities planning, oversees implementation of the Climate Action Plan. He says the energy incentives have played a significant role in moving Dickinson closer to its emission-reduction goals. “In fiscal year 2014, the college implemented more than 20 Climate Action Plan projects, and the Act 129 rebates were an important part of our funding strategy,” he says.

Projects paying for themselves

Most recently, Dickinson received a $47,000 rebate check from its electricity provider, PPL, for installing motion sensors in all the laboratories in the Rector Science Complex. The sensors reduce energy consumption related to HVAC demand when labs are unoccupied, which is about 50 percent of the time. The project is expected to reduce electricity consumption in Rector by 500,000 kWh per year, equating to emissions reductions of approximately 240 mtCO2e (million metric tons of carbon dioxide equivalent) per year—roughly the annual emissions from 36 U.S. households.

The rebate will go toward offsetting the overall cost of the project, and the utility savings will help fund future Climate Action Plan projects. “When considering the rebate and annual utility savings, this project will pay for itself in fewer than two years,” Shultes says. “That’s a terrific payback and return on investment, and it aligns financial and environmental sustainability goals in a powerful way.”

Shultes said other items on the project list that have been completed recently include installing LED lighting in the Kline Center gymnasium and Energy Star air conditioners and motion-sensor lighting systems in residence halls.