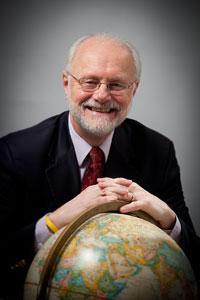 It takes a healthy dose of curiosity to drive a former middle- and high-school science teacher into the Indonesian jungle just to see where a parade might lead him. And Dickinson’s new director of international admissions, Brian Atkins, had an ample supply.

On a break from a conference in Indonesia, Atkins and several fellow educators were driving through the countryside when they spied a procession of men dressed in white on a path that led into a nearby rain forest. Intrigued, Atkins and a colleague followed them. More than a mile—and many twists and turns—later, they discovered the reward: a hidden, walled-in temple, where a special ceremony was about to unfold.

Just as they were about to enter the temple, a sudden thunderstorm opened the sky. In the mad dash for cover, Atkins was separated from his colleague, and he found himself under a makeshift shelter, thrust into a circle of gambling men. Together, he and his new acquaintances waited out the storm.

Though rickety, the shelter he crammed under with about 100 other people remained intact, and although it would take hours, Atkins would eventually find his way back to the Jeep. He never saw the ceremony. Still, he relates, it was a more memorable experience than the one he’d originally sought.

Atkins was a teacher and administrator for 20 years before he uprooted himself and his family to accept a headmaster position at an international school in Peru. It wasn’t a job for the faint-hearted: Because of terrorist activity, most citizens did not venture out alone in remote areas, and they avoided driving at night. During the next 20 years, Atkins more than made up for those restricted freedoms, traveling the globe and working as principal and/or director of distinguished international schools in China, Malaysia and the Netherlands.

“The bonus was that my wife and I got to raise our children overseas,” says Atkins, whose youngest is now 24. He and his wife, Ruth Lopez, have four children, two each from previous marriages. “Our children grew up attending international schools and hearing different perspectives from students from 40 or 50 countries,” he says proudly.

In 2009, Atkins was on the verge of accepting a headmaster position in Korea when an opportunity arrived to serve as director of international admissions at The College of Wooster in Ohio. He seized the chance to move into higher education, relocate closer to family in the United States and help increase the college’s international enrollment.

Atkins joined Dickinson in January. “Dickinson truly is a global community, and that’s reflected in the way everybody on campus looks at the world,” he says. “That makes me feel right at home.”

An avid backpacker, photographer and kayaker, Atkins is eager to take advantage of the Carlisle region’s natural attractions, such as the nearby Appalachian Trail. But that will have to wait, since—like admissions officers everywhere—he is immersed in the busy “reading season,” scouring the many prospective-student applications that cross his desk. He’s also preparing for an April trip to India, with the intent to increase Dickinson’s presence there.

“It’s all about building that one-on-one relationship between college-admissions persons and prospective students,” he stresses. “That can be very rewarding, because of the direct, profound effects it can have in students’ lives.”

In the case of students from the developing world who grow successful and then return to their home countries, an education can affect an entire village. “For these students, attending college in the United States is totally out of the realm of what they might normally expect to do,” Atkins says. “When game-changing students take on that opportunity, great things can happen.”

Of course, it takes a certain blend of talents to attract and identify those game-changers. It can be challenging to wrestle with different languages and time zones, and it’s tough to decode international grade-point-average systems, which can vary considerably—a GPA of 6 in Bulgaria is exemplary, average in Vietnam and so-so in South America, for example. But the man who uprooted himself to launch a new, international career 20 years ago understands how to reach these students better than most. His experience in Indonesia illustrates the mindset and experience that has primed him for the job.

“Being in a country not as a tourist, but as a resident, means building up understandings of everyday life, off the beaten trail. And it’s in the day-to-day details—the nitty-gritty—that you find understanding of that culture,” he explains. “That’s an ongoing process, and as you experience new things and see things from other points of view, your view changes. You’re always learning. That’s what makes it fun.”