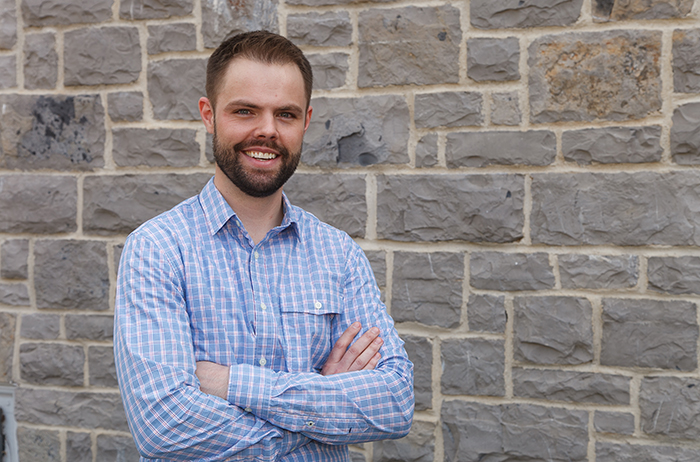 There was a time when “cancer” was scarcely uttered in the non-scientific community—as if the very sound of the word would somehow fuel this terrifying, always-fatal disease. But throughout the 20th century, scientists chipped away at cancer’s veneer, and advancements in surgery, chemotherapy and radiation and drug therapy brought new hope to cancer patients and their families.

Now, some say we are turning yet another corner in cancer research, as some of the world’s brightest and best train their sights on cancer immunotherapy, named the 2013 “Breakthrough of the Year” by Science magazine. One pioneering young researcher in that vein is Ben Boyerinas ’03 (biology), whose undergraduate work with a Dickinson professor led him on a path to one of the hottest and most promising areas of clinical research.

Finding his place in the lab

Boyerinas came to Dickinson with a strong interest in science, and he discovered a passion for research while studying abroad during his junior year through Dickinson’s Norwich Program at the University of East Anglia (then led by John Henson, Charles A. Dana Professor of Biology). There, Boyerinas researched how to control the Pax-6 gene—essential to the eye, the pancreas and central nervous system development—via a growth factor, TGF-beta. Back at Dickinson for his senior year, Boyerinas joined a student-faculty research team with Associate Professor of Biology Mike Roberts, investigating the mechanisms by which leukemia cells might be reprogrammed to self-destruct.

At Roberts’ encouragement, Boyerinas applied to graduate schools, and after graduating with honors and with a Baird Biology Prize, he entered a Ph.D. program in cancer biology at the University of Chicago.

Boyerinas earned his Ph.D. in 2009, stayed at Chicago for three years of postdoctoral research. Then he joined the National Cancer Institute (NCI) as a postdoctoral fellow in the Center for Cancer Research’s Laboratory of Tumor Immunology and Biology, as part of a research team that developed therapeutic cancer vaccines, and investigated an important protein involved in helping the body’s immune system recognize and attack cancer cells. Boyerinas ventured further into tumor immunotherapy research last September, when he accepted a position at bluebird bio, a clinical-stage biotechnology company in Cambridge, Mass., devoted to developing gene-therapy products for patients with severe diseases.

“We’re really entering a renaissance period of immunotherapy,” says Boyerinas, noting that early trials have been especially exciting for patients of bloodborne cancers that have returned after intensive chemotherapy or stem-cell transplants, and for whom other treatment options are not viable. Early stage trials testing this approach in patients with advanced acute lymphoblastic leukemia and lymphoma have generated some remarkable responses, according to the NCI, which predicts that more than 80 percent of children diagnosed with the kind of acute lymphoblastic leukemia that arises in B cells might be cured in this way.

New and even newer horizons

The newest frontier in this young field is solid-tumor cancers, which present special challenges to the researcher and represent approximately 90 percent of all cancer cases. At bluebird, Boyerinas genetically engineers billions of immune cells, known as T cells, to produce chimeric antigen receptors (CARs), which guide the T cells to recognize a specific protein antigen found on the surface of cancerous cells. The CAR-T cells are then infused into the patient and, if all goes well, the cells multiply, identify the cancer cells through the antigen and then kill the cancer, cell by diseased cell.

In bluebird bio’s cellular and molecular immunotherapy division, Boyerinas manages projects in support of preclinical development of solid-tumor therapeutics. His team develops viral vectors used to transduce target T cells isolated from cancer patients and turn them into CAR-T cells. The hope is to create strong T cells that can take a personalized approach to a specific tumor and counteract the tumor’s mechanisms that suppress the immune system. “Until recently, we didn’t understand the mechanisms [within tumors] that could shut down [the immune system],” says Boyerinas, “but CAR T cells offer a potential paradigm shift in oncology, and recent advances in understanding of T-cell function within the tumor micro-environment are energizing the clinical environment. The cure may be a long way off, but the race is on, and hope is really high.”

Seven months after taking on the new job, Boyerinas visited Dickinson to talk with students about his ongoing research. After a lecture on the history of, and recent developments in, cancer immunotherapy research, Boyerinas met with current students and faculty members to answer questions about his work. “The really cool thing about what I’m doing now is that there’s a very direct connection to patient health—you could ultimately help treat a patient, save a life,” he said. ”That makes everything you do very meaningful and fun.”