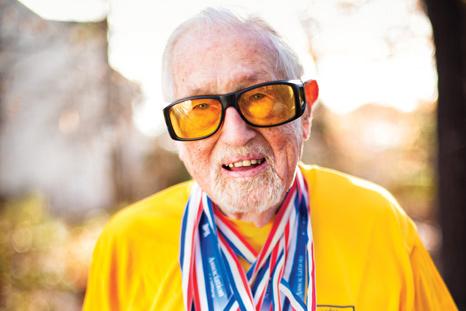 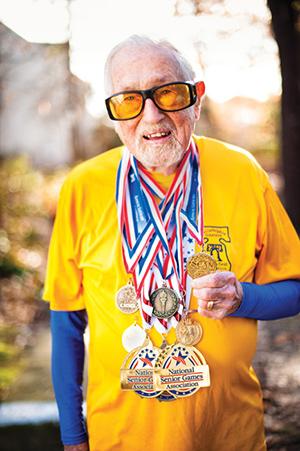 Whether he stands in the ethereal light of a church pulpit or is poised at the top of the discus circle at a track meet, Rev. Champion Goldy ’43’s joie de vivre glows. Talk to him once and he remembers your name, uses it while you chat and when you say goodbye. He is always thoughtfully dressed, and he combs his hair in style to complement a snowy, fashionable goatee. Sometimes he wears a suit jacket and a large silver cross, and other times, he sports gold medals and Lycra.

According to the 2014 USA Track and Field Masters Rankings, Goldy is ranked first in the world for the 3-kg shot put and the 12-pound weight throw. He holds the second spot in the world for the discus, the javelin and the 60-meter dash. In several events, he holds first place in the U.S., having outscored the two other athletes in his age group: a centenarian and a 99-year-old.

Born in Bunker Hill, N.J., Goldy grew up on a farm with his mother and father, two sisters, four horses, 10 acres of apple orchards and 90 acres of other crops.

Goldy worked on the farm throughout his high-school years, including delivering milk to his neighbors at 4 a.m. every day. After high school, he continued to help with the farm. “I drove a produce truck to North and South Carolina with my cousin,” he recalls. “We also delivered asparagus, tomatoes, potatoes and corn to Campbell’s Soup in 1937.”

Goldy recalls two specific events that brought him to Dickinson, the first from a United Methodist Church (UMC) summer-camp experience at the Pennington Institute in Pennington, N.J., when he was 15. On the last night of camp, everyone was told to pray “to see how the Lord could use you to do His work,” while the last log burned on the fire. His early conversations with God about the ministry began in front of that fire.

His second revelation happened in August 1938. At 20 years old, he had decided to become a diesel mechanic and was already enrolled at Drexel University. The family farm was struggling financially. He tells a story that his daughter, Susan Goldy ’75, remembers clearly: “He went into the woods on his farm to chop firewood, and he felt that God spoke to him and called him to the ministry,” she says. “I was always impressed with just how quickly all the pieces fell into place for him after that moment.”

A day later, Goldy met with his pastor and enrolled at Pennington to complete college preparatory credits, with plans to attend Dickinson in the fall of 1939 and apply to seminary. He would be 22 years old.

His Dickinson story from that point on is a virtual tour of the influential people for whom several of today’s buildings are named. At the time, the college was still affiliated with the UMC: Rev. Fred Pierce Corson, class of 1917, was the college president, and Boyd Lee Spahr was the chair of the Board of Trustees. Goldy’s academic advisor was Ben James ’34. Nearly 30 years later, Susan, a psychology major, also would have James as her advisor.

During Goldy’s time in Carlisle, he played the trombone in the marching band and the orchestra. He played baseball for one season but says, “I had to work to be able to stay, so I couldn’t continue with baseball. I mowed lawns, did odd jobs.” Corson gave Goldy opportunities to raise tuition money. “At the time, the freshman dorms had an 8 p.m. curfew. None of the guys could go out after that, and they would be hungry, so I would make 30 to 40 sandwiches a night and sell them with candy and crackers,” he recalls with a chuckle.

“There were times when I was down to my last postage stamp, and someone would mail me a dollar to keep going. I would hand-copy music for Professor [Ralph] Schlecter in the music department for 35 cents an hour.”

Not long after graduation, Goldy married his hometown sweetheart, Audrey Holler, and was assigned to two New Jersey churches as an acting pastor. Weekends were spent away from Carlisle, preaching up to five sermons each Sunday in four different churches and driving hours in each direction to do so.

By the time Goldy retired at age 70, he had served as a district superintendent of the UMC’s Central District in New Jersey and pastor to thousands over his 43 years of service, and he continues to guest-preach when the opportunity arises. His first wife, Audrey, passed away in 1997. He remarried in 2000 and lives in Haddonfield today with his wife, Evelyn Toler. He has two adult children, Champion Jr. and Susan.

But it wasn’t until his retirement that his interest in competitive track and field began. Aside from his long-standing goal “to run the 100-meter dash at 100,” much of Goldy’s motivation to train and stay healthy is rooted in his faith and a commitment to be ready for whatever opportunity might come along — including stints as a model and actor in films, television and on stage, landing appearances in the films A Beautiful Mind and Emmetts Mark and in a television episode of Forensic Files.

“I was always physically active in all of the churches I was assigned,” he says. “Keeping physically fit is important. How am I going to do things I want to do if I don’t?”

Julie Dengler ’93 majored in English and religion at Dickinson, and played field hockey, taught Slimnastics and served as a resident advisor and a senior resident advisor. After graduation, she worked for the Chubb Group of Insurance Companies in Personal Lines and Operations for 10 years. She is married with two children and a boxer named Elvis. Dengler now lives in Haddon Township, N.J., and is freelance writer and photographer. She met Goldy during his tenure as pastor of visitation at Haddonfield United Methodist Church in 1997 and continues to sit within five pews of him most Sundays.

Read more from the spring 2015 issue of Dickinson Magazine.