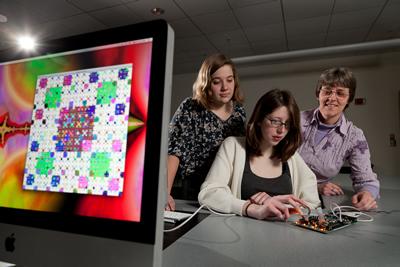 Justine Heritage '14, Katherine Veil '12 and Marge Coahran play with a development board.

Pioneering computer scientist and Navy Adm. Grace Hopper often is credited with coining the phrase “Better to beg forgiveness than to ask permission.” Thanks in part to Hopper’s legacy, two Dickinson computer-science majors won’t have to do either.

In November, Justine Heritage ’14 and Katherine Veil ’12 attended the Grace Hopper Celebration of Women in Computing in Portland, Ore., with Marge Coahran, visiting instructor of computer science. The annual conference seeks to empower active and aspiring women tech whizzes. “Since there aren’t very many of us, we have to be a unit,” says Heritage.

According to the most recent Computing Research Association figures, women account for only 13.8 percent of undergraduate computer-science degrees awarded in North America. In 1980, that figure was 32.5 percent.  Heritage was surprised to learn these figures at the conference and suspects that the decline may be due to male “computer nerd stereotypes.”

Coahran agrees and seeks to overturn these stereotypes. Though many people perceive computer use as a male pastime, “I know plenty of women who love computer games” whether they openly admit it or not, she says. The Hopper conference is a way to bring those women, and men who support the cause, together. “It’s amazing to see so many women [at the conference], because it just doesn’t happen,” Coahran says. “It’s amazing to see the wide variety of work people are doing.” She joined Heritage and Veil for her second visit to the conference this year and describes its mission as “gathering, networking and feeling supported.”

From Pong to epidemiology

Veil and Heritage are two of three women and 18 men with currently declared majors in computer science at Dickinson. Heritage describes the department as a small community with a friendly environment. She says that most computer-science majors find their way to the department the same way she did: by taking an introductory-level class to fulfill a Division III requirement, and falling in love.

This is no accident. Coahran explains that the department recently “revamped the introductory sequence to make it clear from the beginning that computing is fun.” Introductory classes are taught in a workshop style, with emphasis on learning by doing. Students work in pairs to develop a game of Pong or an application that simulates epidemiological tracking, with each student writing a piece of a larger program. This shows students the kinds of projects they can complete in more advanced courses.

“We make an extra effort to help beginning students understand that the upper level [computer-science classes] are enjoyable,” Coahran says, adding that the key to attracting more women to computer science is convincing them to enroll in an introductory class. The course material takes it from there: in many cases, “they discover they love it,” she says.

Veil, on the other hand, has wanted to work with computers since middle school. In her eighth-grade yearbook, Veil listed “computer programmer” as her future career ambition. Veil has since grown “from liking to loving” computer science.

Networking was one aspect of the conference particularly important to Veil. Before the conference, she uploaded her résumé onto a recruitment database for companies attending the conference. She caught the attention of FactSet, a Connecticut-based financial-research firm, and chatted with representatives at the conference. FactSet later contacted her for a phone interview. That conversation led to an on-site interview during winter break, and the next day FactSet offered Veil a position. Soon after graduation, Veil will start full-time employment as a software engineer with the company.

For Coahran, pursuing more balanced gender representation in technology fields benefits both men and women, and the profession in general. “Women offer more diversity of ideas on how to solve problems and what problems to focus on,” she explains. “Women offer more people at the table with ideas and perspectives to share.”