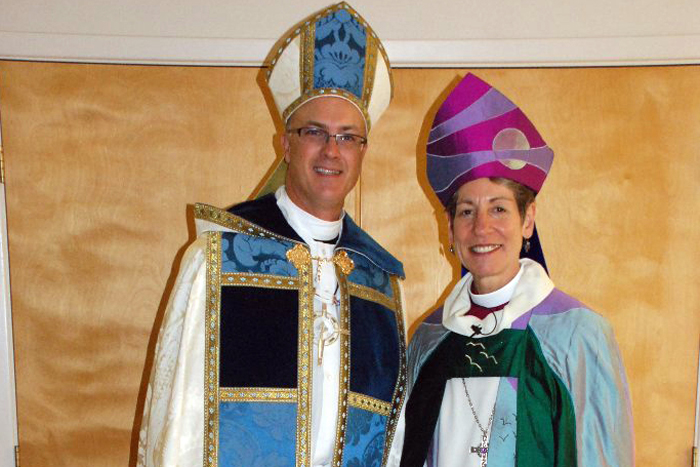 The Very Rev. Mark Lattime ’88 generated excitement this month when he was consecrated bishop of the Episcopal Church’s Alaskan diocese. At 44, he is the second-youngest Episcopal bishop in the nation. And he presides over the country’s largest and most culturally diverse diocese—a 680,000-square-mile state, peopled by diverse tribes and communities, spanning roughly the size of the Midwestern United States.

Lattime was elected bishop by 97 Alaskan delegates last April. He was consecrated in Anchorage on Sept. 4 during a ceremony that highlighted Alaska’s rich cultural heritage.

Just how does a rector from Rochester tackle the vast wilds of the Last Frontier? In truth, he seems uniquely prepared for the post—even if it means braving temperatures of 40 degrees below zero.

A legacy of leadership

Lattime is part of a long legacy of religious leadership at Dickinson. Founded by Presbyterians and acquired by a Methodist congregation in 1833, Dickinson remains affiliated with the United Methodist Church. Noteworthy alumni through the years include the founder of the Reformed Episcopal Church, bishops in the Methodist Episcopal and Methodist churches, the vice president of the National Council of Churches and the executive director of Americans United for Separation of Church and State.

The approximately 200 contemporary alumni who identify themselves as clergy include Rabbi Shmuel Birnham ’76, the official rabbi of the 2010 Winter Olympics, and Mary Douglas Glasspool ’76, who in May was the first gay woman ordained as an Episcopal bishop.

Dickinson’s latest newsworthy cleric is delighted to find himself in such distinguished company. “It is an honor, a joy and a humbling experience to have been invited to walk on this journey of faith,” Lattime said. “It’s an exciting challenge.”

“Challenge” is an apt description. Lattime, who earned an anthropology degree at Dickinson with a minor in religion and a master of divinity at Bexley Hall, served as a college chaplain and an associate pastor before being named pastor of a church in Geneseo, N.Y., in 2000—a post he held for 10 years.

New York is a far cry from the Alaska, which houses 50 parishes and missions in locales ranging from tiny villages to major metropolitan areas. And the barriers to effective communication are manifold.

Foremost is the sheer size of the diocese, much of which is difficult to traverse. Many of Lattime’s clergy live in remote areas and must work in isolation from other priests. And because Alaska is home to persons of Pacific-Island, American Indian and Alaska Native heritage, as well as Caucasians, African Americans, Asians and Latinos,  different dialects are spoken, and different cultures are observed.

As an avid outdoorsman and recreational pilot who took a sabbatical in Alaska in 2006, Lattime is well prepared to navigate Alaska's wild and vast landscape. He hopes to foster a sense of unity by flying to greet clergy and parishioners personally and by using technology such as distance-learning models, Webcasts and podcasts to connect some of Alaska's furthest corners.

Lattime also is experienced in working with youths—a great benefit, given Alaska’s relatively young population. And, while he stresses that there is no substitute for hands-on cultural experiences, his Dickinson coursework in linguistic and cultural anthropology helps him address the needs of the state's culturally diverse, multilingual inhabitants.

“Those courses really opened up a lot of doors, gave me a sense of perspective and helped me challenge myself to consider the joys, nuances and challenges that come with living in a diverse population,” said Lattime. “We have a special obligation to respect and value the integrity of those who are different from ourselves. We can all learn from one another.”

As he settles into his new offices in Fairbanks and prepares to welcome his wife and two youngest children to Alaska at the close of the school semester (oldest child Allison will stay with relatives in New York state to finish out her senior year of high school), Lattime reflects on the spiritual opportunities his new appointment brings.

“Because of the way that the missionary process happened in Alaska, a lot of the villages are Episcopal, Methodist or Friends [communities],” he observed. “When someone visits, they are received with open arms and invited to be part of worship, regardless of their denomination. The ecumenical points that [denominations] argue about in the ‘lower 48’ do not seem as important when it’s 40 degrees below zero outside. It begs the question: If the arguments don’t [seem relevant] at 40 below, do they make sense at 72 degrees?

“That’s the great thing about Alaska. By force of nature and size, it can perhaps become a leadership model for what ecumenical cooperation should be about,” he said. “It’s an extraordinary place.”