With Eyes on the Future 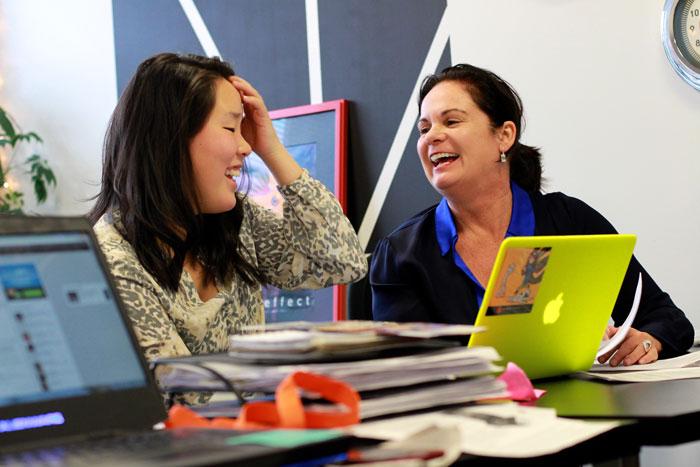 Sunnie Ko '11 (left) works with Elena Cox '86 at the D.C. start-up vibeffect, where her work entails ... "pretty much everything."

With her time at Dickinson not far behind her, Sunnie Ko ’11 has joined former Dickinsonian Elena Cox ’86 at vibeffect, a start-up based in Washington, D.C., that aims to better match prospective students with an environment in which they can thrive. Read more about the former women's & gender studies major's take on the company’s vision, how her classes at Dickinson inspired her to work with students and the reasons she would make an excellent co-star to Paul Rudd.

How did you get interested in your career, and what about it excites you?

I became interested in my career for a lot of reasons, but mostly because it is innovative, creative and pertains to helping students choose the best college for them. At vibeffect, we’re dedicated to ensuring that each financial investment made in a college education is worth every penny. It means they are choosing the school where they will “vibe” the best (rather than feeling like the school chooses them).

I love the feeling of knowing that there isn’t anything else like vibeffect out there and that we could really change the process into something that is less stressful and more beneficial. It also doesn’t hurt that I get to work with one of my mentors, who is also a Dickinsonian [Elena Cox ’86]!

Currently ... everything! We’re using scientific methods to figure out where a student will thrive so the decision is based off of more than “can you afford it?” and “I chose it because it’s a big school.” Because of this, we’re in the midst of creating, editing, tweaking and finalizing many different aspects of our products, all of which I get the opportunity to work on.

The most challenging part right now is ensuring that we are staying true to our vision while we continue to develop something that has not been done before. When you’re starting something from the ground up, it’s easy to be swayed to do this or do that, but I like to think you need to be like a palm tree ... very rooted into the ground but also flexible enough to bend with the wind—cue the calm jazz music.

Can you speak to how Dickinson’s useful education might apply to your career?

I think the phrase “useful education” is interpreted differently by everyone. For me, it means an education that not only prepares you for the specificities of your field of study but also makes you an overall more cognitive thinker. Through my time at Dickinson, I got both: I had the privilege to study with peers who challenged my then-linear way of thinking, to study under professors who motivated me, and to study in an environment that was constantly changing and evolving, which now helps me every day. Also, through my senior seminar and senior thesis work, I became much more attuned to the extremely wide spectrum of students and how each one has a unique set of needs.

This one is easy: playing for the women’s lacrosse team ... or eating in the Caf. They’re a close 1 and 2.

I’ve recently joined the Dickinson Admissions Volunteer Society (DAVS), which helps me stay involved with future generations of Dickinsonians. It’s important for me to stay connected to Dickinson, because I believe relationships should work cyclically. It is pretty cheesy, but I like to believe you should always reinvest in all the places, spaces and people who touch your life, and for me, Dickinson is one of the places.

That would definitely be Paul Rudd. I imagine he would think I was hilarious and put in a good recommendation to co-star in a movie with him.

Back to the 1982 NCAA men’s basketball championship when the University of North Carolina played Georgetown and won. This game had so many amazing players on the court, including Patrick Ewing, James Worthy and Michael Jordan.

A record that plays Sia’s “Chandelier” over and over again, all of the Maroon 5 albums, Ben Folds, Catcher in the Rye, Forrest Gump and Big Fish.