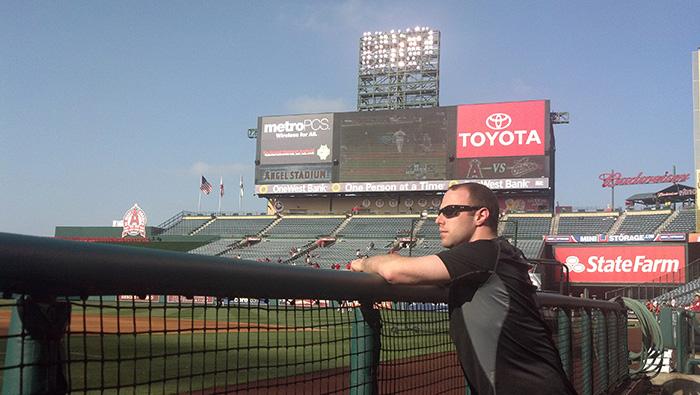 Ben Werthan '08 takes in Angel Stadium in Anaheim, California, long before the Orioles take the field.

It’s a week before the 2012 Major League Baseball All-Star Game, and Ben Werthan ’08 is at Safeco Field, the home of the Seattle Mariners, studying data and video as part of the Baltimore Orioles’ advance-scouting team. Werthan has been the advance-scouting coordinator for the Orioles since January 2012, and the former Red Devil has a task that seems simple to describe but vastly difficult to quantify.

“Our goal is to put our coaches and players in the best position possible to succeed,” he explains. “And if we can provide them any information that gives us an edge against another team, I consider that a great success.”

As much an art as a science, advance scouting is one part of the four-prong baseball-scouting attack. Amateur scouting focuses on players in high school, junior college and four-year colleges and universities who might be good prospects for teams to recruit and draft. The aim of international scouting is precisely what one might think: evaluating players on the international scene for recruitment. Professional scouting focuses on players already signed to clubs that could potentially be acquired through trades, free-agent signings and the like.

In advance scouting, as Werthan explains it, “we look at teams we’re about to play and put together reports on the opposing players and manager tendencies to prepare our club.” In essence, it’s baseball’s version of military scouting, heading out on a reconnaissance mission before the battle. These days, of course, scouting is as much about technology as it is about sitting in the stands and watching a team play.

“Advance scouts have traditionally traveled ahead of their teams to get looks at upcoming opponents,” Werthan says. “These days, we have a wealth of statistical information and up-to-date video available, so several organizations have taken a more in-house approach to advance scouting.”

Of course, if it were only about the raw data, certain elements would surely be missed. “When we’re looking at players and video, it’s subjective interpretation of what guys are doing,” he says. “There are important patterns reflected in the data we look at, but analyzing a player’s physical tools, mechanics and recent performance is absolutely imperative when formulating reports, and it allows us to look at players through multiple lenses to isolate the most pertinent information.”

Werthan graduated from Dickinson with a B.A. in psychology, and he finds value in his major today. “Not to overemphasize it, but having a background in psychology certainly helps on the data-analysis side, and there is definitely a mental aspect of the game tied to player psychology.” (Another recent Dickinson graduate is also putting his degree to work with the Orioles: Evan Fitzpatrick ’11 is working as an intern in advance scouting and baseball operations.)

A Red Devils outfielder during the 2005-08 seasons, Werthan loved playing the game, but heading into his sophomore year, he decided that he wanted to work in baseball operations. “I was not blessed with the physical tools to make a serious run at a career playing professional baseball,” he says with a light laugh. “But I had a good feel for the game and knew I could apply myself in a more behind-the-scenes way.”

So during the summer of his junior year, he interned with the Washington Nationals, doing community relations. Then he landed a baseball-operations internship his senior year and moved out to Cincinnati upon graduation. After interning for the Reds for the 2008 season, Werthan punched his ticket for Tampa and began a two-year stint with the Rays as an advance-scouting intern in 2009, with more focus on amateur scouting in 2010. That internship provided the perfect launch pad for his move to the Orioles, a team that has struggled over the past few seasons but has regained some of its footing this year. “It’s a long season with inevitable peaks and valleys, and you just want to be playing well,” he says. “We’ve proved to ourselves that we can compete in the toughest division in professional sports.”

Werthan sees himself as a very small cog in the very large and complex wheel that is the Baltimore Orioles, but it’s a role he relishes and sees as important in keeping the wheel rolling smoothly. “Ultimately, it’s the players who play the game, but if we can do anything to help give them a leg up, it feels great,” he says. Just being part of the game he loves is also something Werthan cherishes, and it’s something that few others who love or play baseball will ever experience.

“We’re right in the thick of the season,” he says. “And I’m absolutely thrilled and very lucky to wake up every day and go to work doing something I love with great people.”