Physics With a Liberal-Arts Mindset 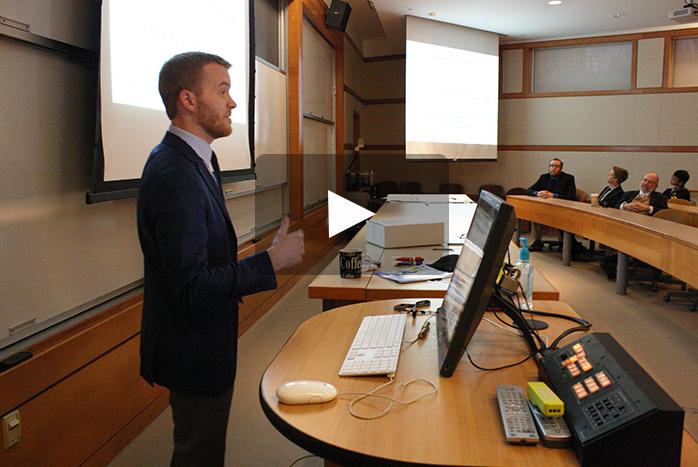 By way of graduate school, Los Alamos National Laboratory and the U.S. Department of Energy (DOE), Sean Finnegan ’01 recently was back on campus to deliver the seminar speech for this year’s Sigma Pi Sigma induction ceremony. The former physics major now manages a portfolio of $42 million in research grants for the DOE, and he had a lot to say about his field, the scientific career path and the value of Dickinson's liberal-arts education.

You’re with the U.S. Department of Energy now. What path led you there?

I studied plasma physics at West Virginia University, where I got my Ph.D. I did work related to the aurora borealis and did a postdoctoral fellowship at Los Alamos National Laboratory in New Mexico, where my work focused on inertial confinement fusion, largely high-performance computing on state-of-the-art machines like the roadrunner supercomputer—everything from high-performance modeling of intense laser-matter interactions to radiation hydrodynamics models. Then I had the opportunity to get into management, and I’m now at the DOE managing programs in what we call plasma-science frontiers.

What kind of memories do you have of your time in the physics department at Dickinson?

At the time I didn’t appreciate what made the department unique, but now that I’m in a position where I interact with researchers at most physics departments throughout the nation, even at some of the premier research institutions, I really have an appreciation for the opportunity the physics faculty [members] at Dickinson give students. It started very early on with Workshop Physics, encouraging students to engage and talk with their peers, providing them with opportunities to lecture and give seminars and present their research so they could work out who they are as a communicator and work out ideas on their feet. It’s physics with a liberal-arts mindset.

Can you speak to how Dickinson’s “useful education” might apply to what you’re up to now?

It’s very important when you serve in a function like mine, where you’re a liaison of sorts between scientists and policymakers and politicians, that you can communicate adequately the importance of a piece of research—how it might impact society and why that particular research or that institution is best suited to execute it. So the broad liberal-arts education I got at Dickinson helped me on two fronts: It gave me the writing skills I need to communicate and also the oral skills.

Most people probably think the hard sciences are all about numbers, data and the like …

I think people take for granted that they are understood when they talk to somebody. There’s a lot of times when you have to battle through preconceptions, and being able to frame logical arguments and communicate my way through that has probably been the biggest asset in the development of my career.

What made you want to return to campus and talk about what you do?

I think it’s important to come back and to show students that there’s not a one-size-fits-all solution for  people with a degree in science. And if there’s an opportunity for me to come and tell these students about some alternative career paths and maybe recruit one or two of them to be interns with me down in Washington next summer, I think it’s a fantastic chance that I wasn’t going to pass up.